Down 24.93%
In the period from the 3rd of November up to including the 28th of March the stock went down 24.93% despite the 12% dividend growth and the 6% group revenue growth in 2017. Was the company really at its top performance in 2017 and is the price now thrown back to the real value of the stock? Or is the market extremely wrong and is the stock heavily undervalued?
The company
The British Associated British Foods (ABF) own a lot of companies: Primark, Kingsmill and Burgen, just to name a few. For investigating the company we keep it simple and divide the company in 5 divisions:

Source: ABF annual report 2017.
Looking at these numbers, we only have to only look at three divisions because the other two ones are too small to really make an impact regarding to short – and mid-term. The three divisions worth investigating are fashion, sugar and grocery.
Fashion:

ABF owns the famous clothing company Primark. This is the main component of the entire ABF business so it’s also the most important. Primark has ridiculous low prices and that’s the strength of the company. Of course there are some cons to low pricing as well, people might view your products as trash or don’t want to walk with that cheap image. However, those days are gone. We consume more than ever and we live in a society with so much consumerism that it could be called destructive. Everything has to be fast, cheap and as much as possible. And the consumption continues to rise:

Source: https://fred.stlouisfed.org/series/PCEC96
Looking at this consumption increase and other factors there are the following strengths of Primark:

Despite this looking like a ultimate success story, there are some weaknesses:
The major weakness for Primark is the mature English retail market with low growth: 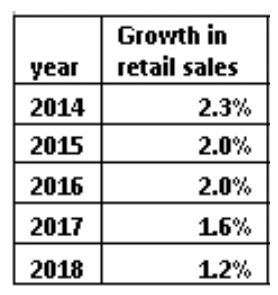 Primark is operating particularly in the U.K. with 244 (64.72%) of their total stores.
Since there is too little growth in the market to let Primark grow at an investing-interesting rate, the growth of Primark has to be at the expense of competitors in the U.K. . This is a difficulty for Primark but they have the advantage that they don’t design the clothes themselves. The suppliers design the clothes for them and then sell it to Primark. The result is that competition between suppliers arises. As a result of the competition you will get better clothes at lower prices so Primark doesn’t have to worry about staying fashionable.
The oppertunities for Primark are expanding to the U.S. or mainland Europe. However, the expansion to the U.S. was disappointing because they don’t expand as fast as planned. However, they are opening an important store in Brooklyn, New York and they expand the store in Boston by 20%. The expansion in Europe isn’t going as fast as thought, but the already existing stores are operating fine.

There are no catalysts for the coming months:
Primark will continue to keep opening stores at the current rate and they are likely to grow at the currrent rate which is high – +18.6% revenue in 2017 -. However there is no reason why you must buy ABF because of Primark today since they haven’t planned any special occasions.

Sugar:
Associated British Foods is one of the worlds largest and most diverse sugar producers. 2017 has been a great year with 21% growth. The causes for this growth were:
High sugar prices in Europe, which is the main area of distribution.
Lower U.K. beet costs. These lower costs were caused mainly by the weak Sterling.
Contribution from the Performance Growth Program across the group. The main aspects of this program are: cost reduction, capital investment and procurement activities.
Despite these success factors, there will be likely to be a sugar price drop in 2017/2018: 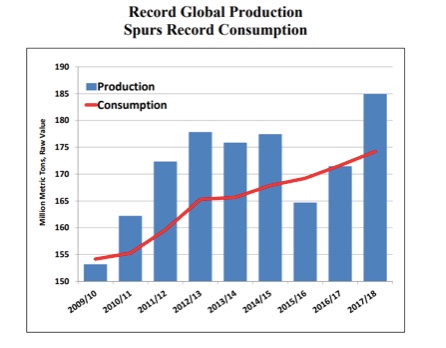 Source: https://apps.fas.usda.gov/psdonline/circulars/sugar.pdf
As shown in this graph, the production will rise way faster than the consumption. This will result in a price drop and a setback for ABF’s sugar companies.
This is mainly seen in the European Market. The EU’s quote regime and export limits will be removed because it is believed that the market will function correctly without them. Production will skyrocket while the consumption hardly increases. Because of these factors the profits in Europe are likely to decline.
Despite the glorious 2017 the sugar division isn’t likely to perform somewhere near the past years’ results but it doesn’t mean there will be no growth at all.

Grocery:
The grocery division of ABF contains 8 companies. To name a few: Twinings Ovaltine, George Weston Food, and Westmill Foods. ABF doesn’t give financial performance of these companies seperately, so we will have to look at it as a whole.
Even if we look at it as a whole, there are no large oppertunities and there are no serious threaths. The revenues have been slightly increased over the past three years as well as the operating profit. The grocery department is a really stable department and there are no catalysts for anything to happen.

Concluding:
The company is down an unfair 25% and there is upside potential. Primark has potential with expanding to Europe and the U.S., the sugar business will receive a setback but growth is still likely to occur considering the 21% growth in 2017 and the other departments of the business -I looked quickly at agriculture and ingredients and there isn’t anything likely to happen- are stable and will grow at the modest rates they’ve been growing for over the past years.

Your opinion!
This is my point of view on ABF. If you have any comments/questions/additions, please don’t hesitate leaving a comment below! I will respond within 24 hours.