Thoughts on earnings from FIVE and OKTA from the Real Money Portfolio, plus updates on IIPR, IQ, GOOG, SBUX, uranium and more...

This counts as a “holy crap!” week when it comes to earnings, not because of any huge reporting that moved the market but because of the surge by just one stock, our fad retailer Five Below (FIVE) after earnings on Wednesday night.

FIVE is generally lumped into the “dollar store” category, it’s the teen-focused retailer that sells most everything for under $5 and is heavily fad and fashion driven, with a jump in earnings last year from the fidget spinner craze and, more importantly to my investment thesis, a very small footprint that they’re aggressively expanding across the country. I bought shares starting back in December because of the two levers that I thought would be operating on their earnings growth: Taxes and Store growth. They are a major beneficiary of the corporate tax cut, since they’re entirely a US company and they paid a pretty high tax rate before January, and they are small enough, with only about 700 stores now, to grow dramatically in size before they run out of appealing new markets to enter.

To give you some idea of the impact of rapid store growth on the top line, they had “comparable store sales” growth last quarter of about 3.2% (which was in the guidance range, though the number of transactions was down a bit because of the cold spring weather), but because they can open stores quite efficiently and get them up to speed fast, and because the store count is so small that they’re actually increasing the total store count by close to 5% each quarter, the actual total sales increased by 27%. On top of that, the lower tax rate helped them double earnings in the quarter, year over year.

Of course, none of that was a huge surprise to analysts — they were expecting big growth, and the company had already guided to strong growth… it’s just that they did about 5-10% better than expected, depending on which metrics you use, and, as importantly, they raised their full-year forecasts. No matter what market you’re in, a “beat and raise” quarter is going to get investors excited, and in this market of growth enthusiasm it’s perhaps stronger than usual… so the stock opened almost 20% higher on Thursday morning. 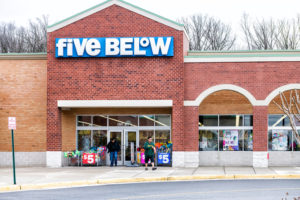 So even with using ‘weather’ as an reason for their traffic and transaction volume being down a bit, which can be a red flag, they beat the expectations handily. In case you’re wondering about which products are driving the bus right now, there’s not one specific one (like last year’s fidget spinners), but, according to management on the conference call, “slime, smiley, squishy, spa and mermaid trends continued to be popular.”

The financials point to the risk of a letdown in their second quarter, which ends July, mostly because the comparable year-ago quarter was the major beneficiary of the fidget spinner craze so the comps are challenging, so it might be that we’ll see the shares come back off of these highs a bit — but the company is doing everything right and I remain very impressed with their growth strategy and their ability to bring new stores into the fold so quickly and remain so nimble with fads and fashions.

Next quarter’s results will probably depend on whether or not their summer-themed sales take off, with giant beach umbrellas and emoji towels and whatever else, so it’s possible that we’ll see some dips, but I think this one is worth holding even at these much-higher prices — a regional store going national can be a phenomenal investment if they can open new stores with relatively small capital investments and make them profitable quickly, and FIVE is getting it right.

You can see the conference call transcript here to get an idea of what management is focused on. This is certainly not a cheap stock — with expected earnings of about $2.45 (that’s the middle of the company’s forecasted range), it trades at almost 40X current-year earnings — so it’s not one that I’d want to be the largest position in my portfolio, but the growth potential is very strong and they’re building at a speed that would have them almost doubling the store count in the next five years, and that would still have them well below their potential market of 2,500 stores. So in some ways this stock price surge is just a validation that Wall Street believes them now.

That won’t necessarily stick, you never know — but if they can get through another good year of merchandising, it could be a fantastic year for the company… they are guiding to just 1-2% comparable store sales growth and almost 20% sales growth overall, with impressive discipline in keeping costs under control as they expand, but they’re still fashion-driven and hit-driven. That means if they have another “fidget spinner” quarter this year they’ll blow out those numbers and the stock could soar, if they have a flop in the fourth quarter and don’t have good holiday sales, the stock could get cut almost in half (about half of their earnings come in the fourth quarter, like most retailers).

So… fingers crossed. I expect to see the 2020 earnings estimates (that’s their next fiscal year, ending in January of 2020) rise into the fall, probably by about 10%, and that will mean the stock at $99 would be trading at roughly 30X forward earnings. That’s reasonable for this kind of growth, but the stock is also volatile around earnings and general sentiment about retail stocks (which has become strong again recently) so it’s quite likely that we’ll see the shares dip to more appealing prices along the way, too. If I didn’t own, I’d think about a first nibble in the low $90s if it dribbles back down to that point.

And Okta (OKTA), the “identity cloud” service provider that I’ve been adding to recently, also had a solid quarter — though not nearly so dramatic, and the company is not profitable just yet. They reported revenue and earnings “beats” and increased their guidance to above what analysts had been expecting for the year.

That didn’t have much impact on the stock price, in the end — there was a little “pop” because people like to feel like they have to do something when there’s a quarterly report, but it flattened out a bit not long after and by late yesterday the stock was back in the low $50s where I most recently added a few weeks ago, with analyst targets raised but not to dramatic heights, most analysts are looking for $60-65 for these shares.

For me, what stood out was the fact that they went positive on their operating cash flow this quarter and talked about that a bit on the call, so they’re starting to think about and report about their company in a way that owners would appreciate: Is it going to make money?

And if this trend continues, it certainly will — they now have 747 customers who each provide annual recurring revenue of greater than $100,000, so they’re getting solid deals with large customers and beginning to expand those customer relationships, which could snowball… that number was 691 last quarter, so it’s at least moving in the right direction. What’s most appealing to me with Okta is their focus on identity and convenient security, which is clearly important to companies (my perspective is that most companies don’t spend nearly enough on cybersecurity or have secure-enough systems, and part of that is because security that’s so stringent that their employees can’t operate freely is inconvenient, and inconvenient stuff gets bypassed… I think of Okta as offering customer service-friendly login/access security).

The problem, of course, is that I’m not an enterprise IT buyer… I don’t really know whether their product is better than the many competitors offered up by software vendors, I just know that it’s convenient and cloud-based and that they seem responsive to offering up newer and more convenient security/identity solutions. The way to know whether it’s working, since I’m not going to become an embedded expert, is just to watch customer acquisition and retention… sometimes we overthink this stuff and try to extrapolate the future or compare technical products that most of us really aren’t qualified to analyze, but in reality if it’s an appealing product and they market it well, their customer count and their retention and their revenues will rise. If not, they won’t. We get to hear an update each quarter, and so far so good — I like the story, and the numbers keep backing it up, and as long as that happens I’m likely to stay in the stock to see how it plays out, speculative though it clearly is. I added slightly to the position again following the post-earnings dip (at about $52).

And in other portfolio musings… I noted yesterday that I decided to buy an initial slug of Hershey (HSY) shares after looking into it again for the latest “tease” from Porter Stansberry, but that also got me thinking about other “brand” stocks that might be relatively inexpensive and sturdy companies if and when we hit the next downturn.

So I did some browsing and screening, and yes, that turned up quite a few packaged food companies that are in obvious downturns due to changing consumer preferences (General Mills, Kellogg, Kraft Heinz, Campbell Soup), and perhaps those will end up being bargains if those companies can figure out how to appeal more to consumer interest in fresh foods and rejuvenate