Who will take home the coveted gobbler for the year? Will it be the newsletter that teased a bumbling biotech... a faltering miner... an "up in smoke" marijuana stock?

Turn down the football game and bring out the pies, it’s that time again!

Stock Gumshoe is mostly closed down for the holiday week, but we do have to continue our annual tradition of calling out our “Turkey of the Year” … so take a pause from arguing with your family and join us, won’t you?

What is this tradition, you ask?

Every year, as American families gather to give thanks, and perhaps to remind themselves of why they don’t gather more often, we take a moment to point out one of the truly dreadful stock picks that was teased by the newsletter promoters in the past twelve months.

It’s not a particularly scientific process — we usually have a good number of stocks to choose from that are down 70-90% or more from when they were touted, even during good “bull market” years, so we have to pick one from among a bunch of stinkers.

What makes a turkey stand out? Mostly, it’s the mismatch between promise and reality… or, sometimes, the surprising nature of the collapse. If you’re dealing with a one-drug biotech stock about to hit a big FDA decision date, you should be going into that knowing that the “thumbs down” could lead to a 90% collapse, that’s why those stocks have the potential to gain 500% when things go the other way… risk and reward are inexorably linked, but often those collapses are a genuine shock.

So the Turkey of the Year is ideally a stock that performed terribly, defying some wild optimism from the promotion. Sadly, that also doesn’t usually narrow it down to a single winner… so we have to go with the unscientific poll of one: I get to decide. Don’t worry, you’ll have your chance to argue for your own turkey in a moment.

Last year’s winner was the pick of Indivior (INDV.L, INVVY) from Chris Mayer, whose newsletter stopped publication not that long after (he’s still around and still writes an interesting blog, but as a money manager instead of a newsletter flack)… and that one serves as a reminder that turkeys don’t often learn to soar like eagles — as has happened many times with past Turkey of the Year winners, Indivior has lost another 2/3 of its value since winning the honor (thanks mostly to a fraud allegation and massive fine from the DOJ).

Who, then, are the candidates this time around? Who will win the 12th annual Turkey of the Year? To date, 2019 has been worse than average, we are still seeing the typical 1:2 ratio of winners to losers, almost every year it turns out that about one third of the teaser picks beat the S&P 500, but the overall performance looks a bit worse than usual because we don’t have a few huge winners skewing things to the upside (no 100% gains at this point in 2019, which is odd for a year when the market did well), and we have an unusually fruitful crop of stocks that are down more than 80%.

Most of the possibilities are in the beleaguered marijuana or mining sectors, perhaps because there weren’t many junior oil stocks teased this year, and, of course, there’s also at least one biotech. Here’s the list of the worst-performing teaser picks from the past year or so, the ones that have lost more than 75% relative to the S&P 500 (numbers from Tuesday): 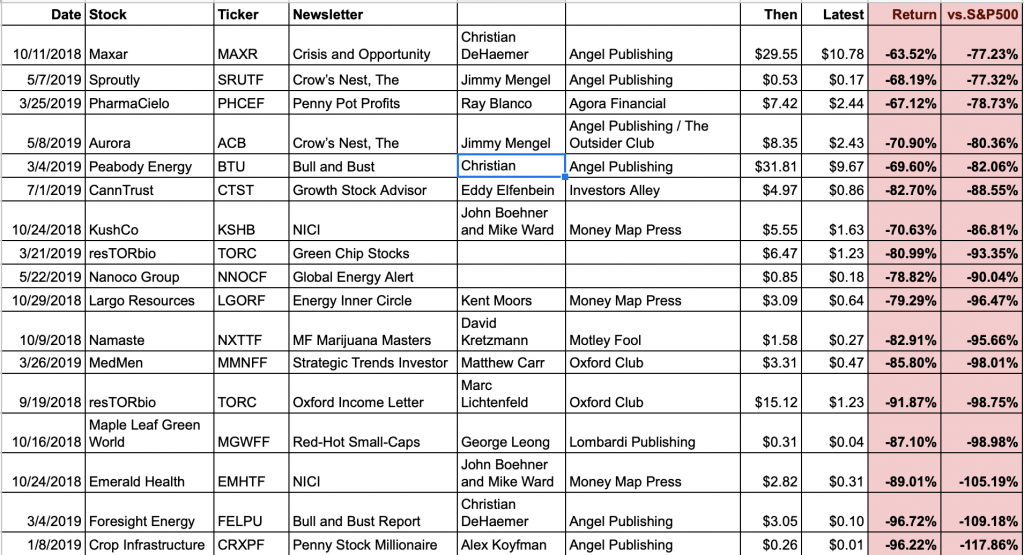 Angel Publishing leads the way this year, with about a third of that list from its newsletters… next is Money Map Press, thanks largely to their “National Institute of Cannabis Investors,” but there’s plenty of infamy to spread around among the various stock touters for this year, Angel mostly stands out just because they don’t have a single teaser pick in the green for 2019 (though, to be fair, they do have a couple late-2018 teases that have done very well in Ballard Power (BLDP) and Aerojet RocketDyne (AJRD)).

So… before we name our winner, do any of these possible turkeys have lessons to teach us?

Christian DeHaemer’s pick of Maxar (MAXR) for its satellite business (63% loss) might be a “don’t catch a falling knife” lesson, since it had gotten clobbered even before he picked it, though it did also recover some after it bottomed out a few months later in January, and his repeated pick of Peabody Energy (BTU) a few times over the past year as a “coal contract” income play (72% loss) might be a lesson about the dangers of chasing dividends in declining businesses… and one of the other coal dividend stocks he teased in those same ads, Foresight Energy (FELP, now FELPU) has done even worse, losing about 90%.

Chasing a bad commodity trend is a lesson others can teach us, too — if we go back into the later months of 2018, where picks are also eligible for the Turkey treatment, we see Kent Moors popping up his head with his pick of Vanadium miner Largo Resources (LGO.TO, LGORF), down almost 80% (and also, sadly, in my portfolio).

The “betting on a continuation of a bubble” ideas almost always lead our tracking spreadsheets at both the top and the bottom, as well — so a year ago the marijuana picks would have been plentiful at the top of our list of best performers, and this year they’re about half of the Turkey candidates.

And this year, as happens from time to time, there’s also a duplicate on the list — resTORbio (TORC) was touted by Oxford Club’s Marc Lichtenfeld back in September of 2018 as having 4,000% potential thanks to its “fountain of youth” drug, and then again was pitched half a dozen different times by Jeff Siegel’s Green Chip Stocks starting in March, with his “Day Zero” pitch about the news coming from them that would make for “the most profitable day in the history of mankind.”

And that came pretty close to being the final winner, frankly, partly because Siegel was so relentless in promoting this “Day Zero” silliness even when the company didn’t have any meaningful “catalyst” news expected until at least the first quarter. Surprising everyone (except perhaps Siegel), that meaningful news appeare