Ed. Note: This article was previously published by the author in Seeking Alpha.

It is rare that you find a micro cap stock that’s earnings have grown by 500% over the last decade and has been paying dividends over the last 20 years, but it is trading at a forward PE of only 16.

Armanino Foods of Distinction (AMNF) is a conservatively managed company in the packaged foods and meats industry with a market cap of about $120M. I believe buying the company’s stock is a great option in these uncertain financial times, because it appears to be undervalued and offers tremendous long term capital growth combined with dividend income potential.

Armanino Foods of Distinction (AMNF) produces and markets upscale and innovative food products, including frozen pesto sauces, frozen pasta products, sauces, and cooked and frozen meat and poultry products, to customers in the United States, Canada and Asia. The company also sells cooked beef and turkey meatballs, and cheese shakers under the Armanino label. Products are marketed by a network of food brokers and sold to retail, foodservice, club-type stores, and industrial customers. At the end of 2018, sales to the company’s distributor in Asia amounted to 8% of gross sales, while most of the sales in the U.S. were on the west coast. 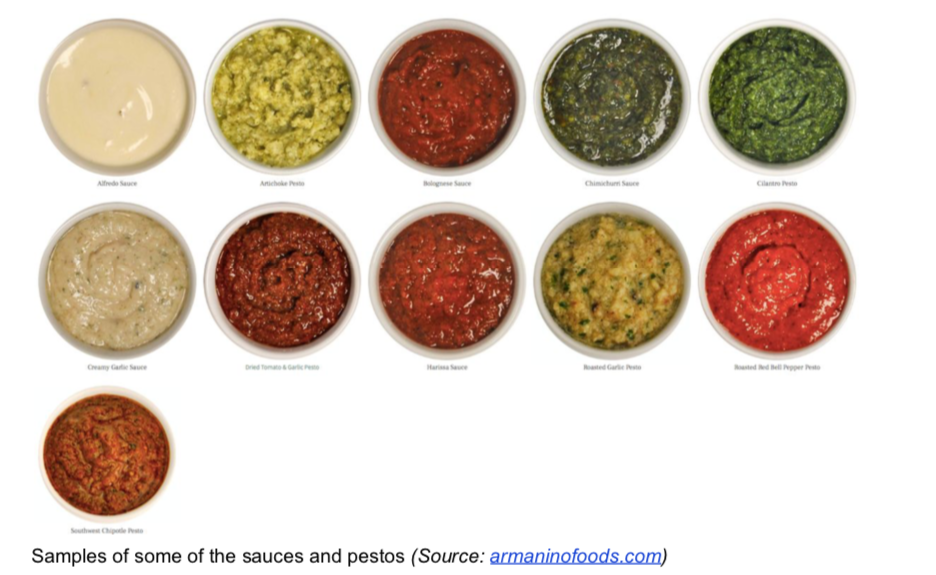 The company’s corporate headquarters are based in Hayward, CA and as of December 31, 2018, employed 42 people on a full time basis. The Armanino family ​took the company public in 1988. ​Since August 2005, Armanino’s Common Stock has been listed on the OTC Markets under the ticker symbol AMNF. Prior to August 2005, the common stock was traded on the NASDAQ, but management decided to deregister from NASDAQ. Although the company is not required to file Securities and Exchange Commission Forms 10 KSB, 10 QSB, 8 K and proxy statements after deregistration, the company continues to have its financial statements audited and has made its quarterly and annual financial and other information publicly available.

The management team is made up of the following members:

Edmond J. Pera​, President, CEO and Director – Mr. Pera has been serving the company since 2000 in various leadership roles. From 1991 to 2003, Mr. Pera was the sole owner of Pera Management Consulting, a consulting firm specializing in start-ups, restructuring and reorganization, finances, etc. From 1982 to 1991, Mr. Pera was President and CEO of Advanced Communications, which manufactured and marketed electronic mail equipment. From 1967 to 1982, Mr. Pera was employed by Levi Strauss & Company where he served in a number of management positions. Mr. Pera owns 450,000 shares of Armanino common stock.

John J. Micek III​, Director – Mr. Micek has been a Director of Armanino since February 1988. He also served as a director of the company’s wholly owned subsidiary from May 1987 until it was merged into the company in December 1990. From July 1997, Mr. Micek served as Chief Operating Officer for Protozoa, Inc. and from April 1994 to February 1997, Mr. Micek was General Counsel at Enova Systems, Inc. From January 1989 to March 1994, Mr. Micek practiced law and served as a consultant to the Company on corporate finance matters. From September 1998 to May 2004, Mr. Micek was President of Universal Assurors, Inc., a member company of Universal Group, Inc. Since April 2001, he has also been managing director of Silicon Prairie Partners, L.P., a venture fund. He also serves as a director of Universal Group, Inc., UTEK Corporation of Tampa, Florida, and Enova Systems, Inc. Mr. Micek owns 142,960 shares of Armanino common stock.

Patricia A. Fehling​, Director – Mrs. Fehling has been a Director since December 2004. Since 1983, Mrs. Fehling has been the owner of Fehling and Associates Food Industry Consultants. During Mrs. Fehling’s 37 years in the food industry, she has taught product development seminars for the University of California at Davis and other universities in addition to conducting product development for food firms throughout the United States and abroad. Mrs. Fehling is a member and active in the National Institute of Food Technologists. She is a member of the Lodi Salvation Army Advisory Board and Culinary Board, and is a Red Cross Disaster Captain. Mrs. Fehling owns 100,000 shares of Armanino common stock.

Edgar Estonina​, Chief Operating Officer and Chief Financial Officer – Mr. Estonina has been with Armanino Foods since June 2006 when he was hired as the Company’s Controller before becoming Chief Financial Officer in February 2009. On December 2015 Mr. Estonina took on the additional role of the Company’s Chief Operating Officer.

Before investing in a company, I perform a desktop background check on the management team and the other companies they serve. In this case, I did not find any hidden skeletons in their closets. All the team members have been with Armanino for more than 10 years and have plenty of “skin in the game.” I​nsiders own approximately 6.8% of AMNF common stock and institutions 5.75%.

The following table summarizes the financials for AMNF from 2009 through the first 6 months of 2019​ (numbers are in thousands, except per share and share data). 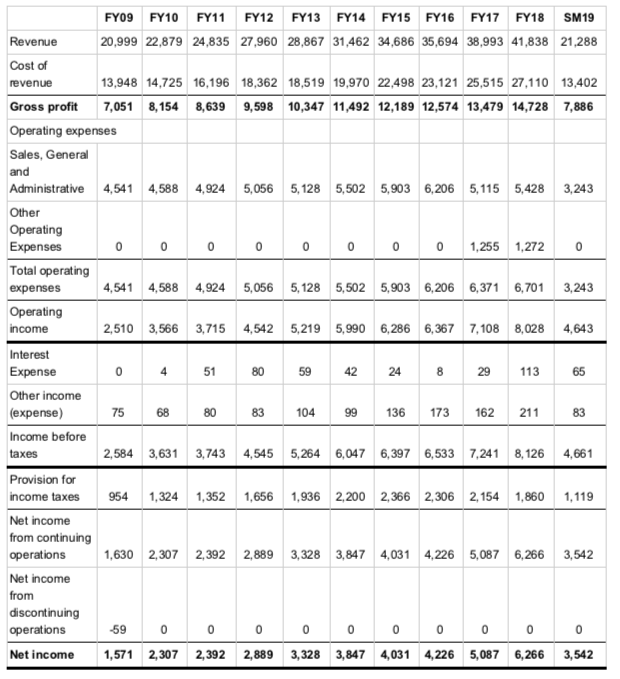 The financials are what attracted me to Armanino – revenues have grown consistently and doubled over the last 10 years, while earnings have accelerated from 4 cents to 20 cents per share. The main reason why earnings are accelerating is because the net profit margin has been increasing from 7.5% in 2009 to 16.6% in 2019.

Return on equity is an impressive 40% for the TTM and the company generated plenty of cash with net operating cash flow of $5.4M. At the end of the first 6 months of 2019, the company had $7.8M in cash and $3M in debt. Dividend yield is about 2.7% with a payout ratio of 46% leaving room for increased dividends in the future. Through June 30, 2019, the Company has declared 77 consecutive quarterly dividends.

Armanino has established a great distribution network on the west coast and is expanding to the rest of the country as well as into Canada and Asia. The company website lists retail store locations in northern and southern California, northern Nevada and Arizona, so there is still a lot of room for expansion. The company constantly researches new flavor profiles and innovative products to add to their product lines for existing and new customers.

The following table compares Armanino with other listed companies in the packaged foods and meats industry.

The table indicates that although Armanino is more profitable with a higher ROE, it is clearly undervalued compared to competitors. (It may appear as if B&G Foods is also undervalued, but they have high debt of $1.85B and only $20M cash.)

Armanino also faces competition from larger food conglomerates like The Kraft Heinz Company (KHC) and the J.M Smucker Company (SJM). These companies maybe competition, but they can also be potential candidates for an acquisition of Armanino to expand their product lines.

In the press release of the second quarter results, management indicated that they expect “sales of its new products will start to gain traction sometime in the 2nd half of this year.” Management also sees strong momentum in the sale of its core products and they are “cautiously optimistic” about the financial performance for the remainder of 2019.

Based on these comments and the financial results for the first half of the year, I believe that EPS for FY19 should come in around 0.23 cents compared to 0.20 cents for FY18. This forecast is based on revenues increasing from $41.8M in 2018 to $43M for 2019 and a net profit margin of 17% versus 16.6%. This will result in a PE of about 16.2 which is low compared to competitors and a company that is growing so consistently and has been paying dividends over the last 77 quarters.

The following chart shows the stock price from 2000 to date. 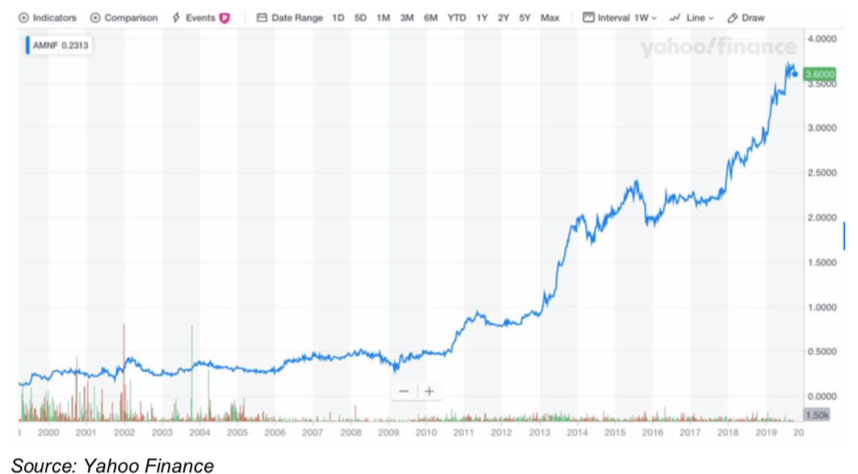 Over this time frame, the stock price has appreciated from about 0.2 cents to its current price of $3.6, but I think there is still a ​long runway ahead as the company expands into the rest of the country.

Based on the historical impressive EPS growth, consistent dividend payments and future expansion potential, ​I think a PE of around 20 maybe more appropriate. This means that the stock price is currently about 20% undervalued ​and also offers great long term capital growth and dividend income potential.


This is a discussion topic or guest posting submitted by a Stock Gumshoe reader. The content has not been edited or reviewed by Stock Gumshoe, and any opinions expressed are those of the author alone.