COVID 19: What Are Prospects for the Duration?

Doc Gumshoe on Arizona, Sweden, Herd Immunity and the Progress of Vaccine Programs

The same thing is the case with COVID 19.   It is the dominant reality for the duration, which means it will go on as long as it goes on.   How long that will be, no one really knows.   But perhaps there are signs and indications that we can look at today as a way of bringing our speculations a bit more into focus.

What makes for hot news is when there are upsurges in new COVID 19 cases, whether these take place in one neighborhood in Brooklyn, in an entire state in the midwestern US, or the whole subcontinent of India.   Information about how an upsurge is controlled is, for some reason, not so hot.   But if we’re keeping an eye out for relevant developments in this pandemic, the not-so-hot news can be just as important, and perhaps more important.

For a start, let’s look at how two very different places managed, or attempted to manage, the coronavirus.

Sweden and Arizona versus COVID 19

Sweden pinned its hopes on herd immunity.   The idea was that as more people become infected and (hopefully) recovered from the disease, and therefore acquired a degree of immunity, there would be a decreasing number of people in the community who would spread the infection.   The epidemic in Sweden would therefore diminish along with the proportion of potential disease spreaders.   But for this to happen in reality, there either has to be an effective vaccine or a very high fraction of the population has to develop immunity due to having had the disease itself.   In terms of defeating COVID 19, this was an optimistic assumption – an assumption that took for granted that many, many people would acquire the infection, and that perhaps a few of these unfortunates would die, but that the COVID 19 plague would go away.   That assumption did not work out.

At this point, Sweden has over 100,000 cases and nearly 6,000 COVID 19 deaths.   Its immediate next-door neighbor, Norway has about 16,000 cases and fewer than 300 deaths.   Sweden’s population is about double Norway’s, but Sweden’s infection rate is triple Norway’s and its death rate is ten times higher.

The inhabitants of the two nations are similar, and both nations have excellent health-care systems.   The chief difference is that while Norway put into practice strict preventive measures such as social distancing and masks, Sweden did not.   Some individuals in Sweden took precautions as a matter of individual choice, but the government made no move to enforce or even encourage these precautions.   The results are evident from the comparable infection and death rates.

Now let’s take a look at Arizona.   When the coronavirus started to emerge as a serious threat, Arizona imposed business closures and stay-at-home orders similar to those in many other states.   But as there began to be hints that the threat from the virus might be abating, Arizona’s Governor Doug Ducey, yielding to pressure to re-open the state, did not continue these closure orders beyond May 15th.   Whereupon daily diagnoses of COVID 19 took off like a rocket, climbing by a factor of ten over the following six weeks.   That surge reached its crest around the end of June, at which point Governor Ducey reimposed those previous protective measures.   And from that point, the number of new infections plummeted, so that by early August, new infections were down to the levels seen in early May.

The graphic below, from the Morbidity and Mortality Weekly Report (part of the CDC) tells the story. 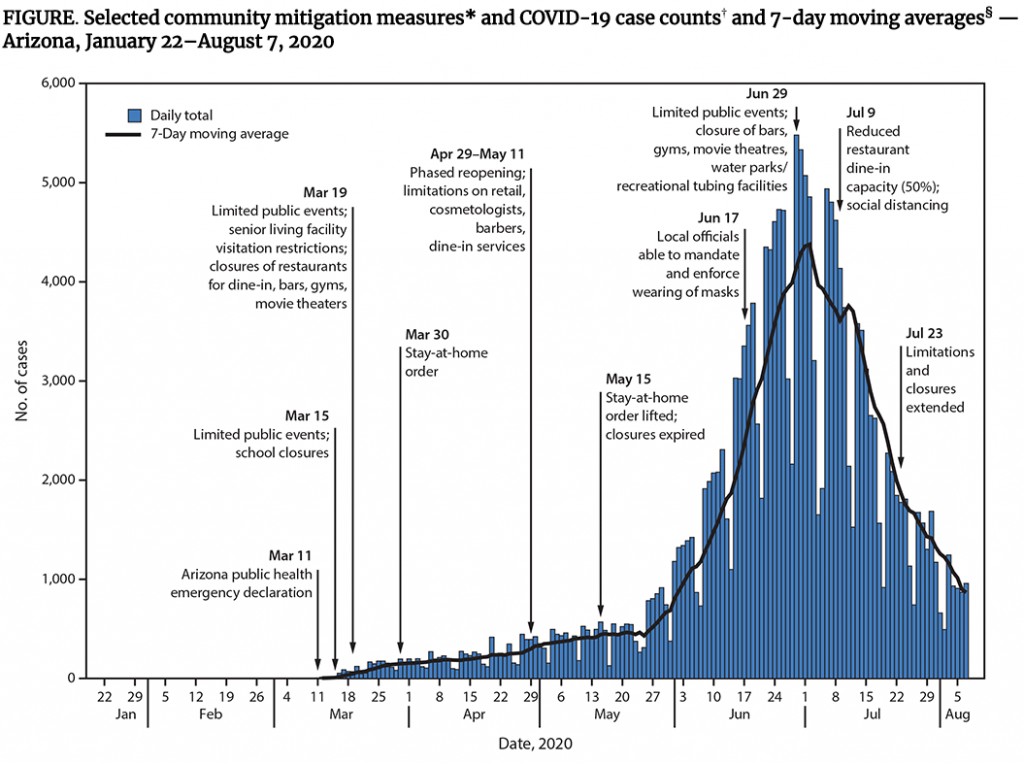 Certainly, based on those data, the protective measures that were reimposed in the middle of June are what did the trick.

The moral of this story, if it needs to be pointed out, is that simply letting herd immunity develop on its own causes severe harm to many, many people.   It is a deadly strategy.

How to get to herd immunity

The results of Sweden’s reliance on herd immunity should not discredit herd immunity as an effective way of curbing the spread of a communicable disease.   The question is, how is herd immunity achieved?   Sweden apparently thought that it would come about naturally as more and more people got infected and recovered, having acquired some immunity.   This may have led to the conclusion that the best way of achieving this goal was to do little or nothing to prevent the spread of infection.   Historically, some epidemics may have been slowed in exactly that same way.   At the time of the 1918 flu pandemic, there was no flu vaccine, and it was largely herd immunity that finally slowed it down.   However, other devastating infectious diseases have effectively been stopped by means of vaccines, smallpox and polio being prime examples.   And, of course, widespread vaccination is the prime means of getting to herd immunity.

A group of three eminent medical scholars have proposed an alternative method of attaining herd immunity in a document entitled “The Great Barrington Declaration,” which reportedly has been signed by over 90 clinicians and 300 medical workers.  They propose a strategy which they suggest will offer maximum protection for persons most at risk of serious infections and death, while permitting people who are at lower degrees of risk to continue relatively normal lives.  Here’s an excerpt from that document:

“Current lockdown policies are producing devastating effects on short and long-term public health. The results (to name a few) include lower childhood vaccination rates, worsening cardiovascular disease outcomes, fewer cancer screenings and deteriorating mental health – leading to greater excess mortality in years to come, with the working class and younger members of society carrying the heaviest burden. Keeping students out of school is a grave injustice.

“Keeping these measures in place until a vaccine is available will cause irreparable damage, with the underprivileged disproportionately harmed.

“The most compassionate approach that balances the risks and benefits of reaching herd immunity, is to allow those who are at minimal risk of death to live their lives normally to build up immunity to the virus through natural infection, while better protecting those who are at highest risk. We call this Focused Protection.

“Those who are not vulnerable should immediately be allowed to resume life as normal. Simple hygiene measures, such as hand washing and staying home when sick should be practiced by everyone to reduce the herd immunity threshold. Schools and universities should be open for in-person teaching. Extracurricular activities, such as sports, should be resumed. Young low-risk adults should work normally, rather than from home. Restaurants and other businesses should open. Arts, music, sport and other cultural activities should resume. People who are more at risk may participate if they wish, while society as a whole enjoys the protection conferred upon the vulnerable by those who have built up herd immunity.”

… but I strongly disagree with that position

Having quoted extensively from the Great Barrington Declaration, I needed to emphasize my disagreement, in bold italics.