Happy New Year to the best readers in cyberspace! I hope your 2019 is fabulous… and that you don’t have too many heart palpitations following the last couple weeks of market and political brinksmanship.

I haven’t written to you in a while, thanks to my much-appreciated time away with family and friends in the mountains, so in addition to the first part of the Friday File (released this morning, a teaser solution for your edutainment), I’ve got some minor updates on the Real Money Portfolio to share… as well as some thoughts about gold.

First, today I’m adding a little bit to my Altius Minerals (ALS.TO, ATUSF) position, just to be contrary for a stock that’s been falling sharply.

It’s falling for good reason, China slowdown fears mean that everyone is panicked about raw materials costs falling — so copper prices are down and iron ore prices are down, which drive much of Altius’ royalty revenue… though potash prices, their other big contributor, have been steady to rising a little.

Altius continues to have some debt, about C$120 million, but also plenty of financing flexibility and some equity and debt investments beyond the royalty portfolio and project generation portfolio, so the (small) dividend looks quite safe and they should be able to make further deals if they see anything compelling. I don’t know if they’ll get anything out of their Alberta coal claims other than a long drawn-out legal fight, but they are again getting royalties on Voisey’s Bay after settling that long legal fight, so that’s going to again be a revenue-generating part of the business instead of an odd footnote on the reports.

I allow my Altius dividends to reinvest, and this week I decided to boost the portfolio position slightly with some new money as well. I’ve done that pretty regularly for years, and it hasn’t worked out particularly well yet — Altius has been a drag on the portfolio, but I continue to think that their assets are more valuable than they’re being given credit for… and that they should be able to earn a stronger valuation if the commodities markets turn positive again (as they typically have, eventually, at least over the past 20+ years), along with possible windfall gains if some of their prospecting projects or spinoffs can be sold at high prices in the next peaking market, as they have managed to do a couple times in the past. I’m patient and stubborn with this one, so your mileage may vary, but I’m pretty sure copper and iron ore and potash will still be important and valuable in 20 years, and Altius will still be collecting royalty revenues on some solid projects. Like most of my past buys, this is not a huge one — I increased my position by about 5% at about US$8.

And in my other substantial metals-focused investment, I also exercised some of my Sandstorm Gold (SAND) call options that are due to expire in two weeks… I think gold is still important, and is likely to be more important if recent manic moves in the currency markets are any indication. Sandstorm is essentially all “optionality” for gold, with low operating costs… but with a substantial risk factor baked in thanks to their heavy reliance on the Hod Maden mine to provide most of their future (4+ years from now) revenue growth. That’s both because the mine hasn’t been built yet, they’re still in the study stage, and because it’s in Turkey, which scares people (though there are plenty of productive and operating mines in Turkey today, including some owned by foreign companies). Gold tends to do very well after the market does poorly, so the odds of a substantial rise in gold have increased a bit — though, of course, an agreement on China trade and a government Kumbaya moment could change that narrative quickly and send folks away from the ‘safety’ of gold.

That term is dumb, of course — gold is a way to protect yourself against currencies blowing up, and tends to be a last resort when you don’t trust other assets, it’s not “safe” in any timeframe that’s meaningful for most investors. I like it because it gives me some confidence to take other risks in my portfolio, since gold tends to do well after the market does poorly and can do well (though not always) when inflation scares people out of cash, but I also think of it as a global high-friction currency… it is pretty universally accepted as valuable, and has been so for thousands of years, but it costs money to buy and sell and hold it, and day-to-day demand for the physical metal seems largely to be driven by Indian consumers and the Chinese government, so there’s always potential for a shocking rise or fall in demand.

But I’ve been thinking some about gold as the recent market upheaval has put, at least temporarily, a little bid under the shiny stuff. That could change in a second, of course, particularly because gold prices are so driven by the value of the US$, which itself is often driven by changing interest rates (higher rates make keeping your money in US$ relatively more appealing, and if the dollar goes up then the value of gold in dollars generally falls… and, though both “gold” and “the dollar” have acted as something like a “let’s hide here” trade during times of distress, the dollar now pays a couple percent in interest… gold pays nothing and generally has a carrying cost in storage or management fees).

And adding a bit to Sandstorm here also got me to thinking about what was probably last year’s most heavily hyped gold story — the pitch from Dan Ferris at Extreme Value about his “new kind of royalty” investment that he thought would be his best idea ever.

That idea turned out to be Sprott (SII.TO, SPOXF), which I agreed at the time was likely to be levered to gold, mostly because of its heavy reliance on management fees for its exchange traded funds that provide liquid (and redeemable) access to physical gold. That hasn’t really been the case, at least in any kind of direct way — here’s the chart of Sprott shares versus Gold over the past year: 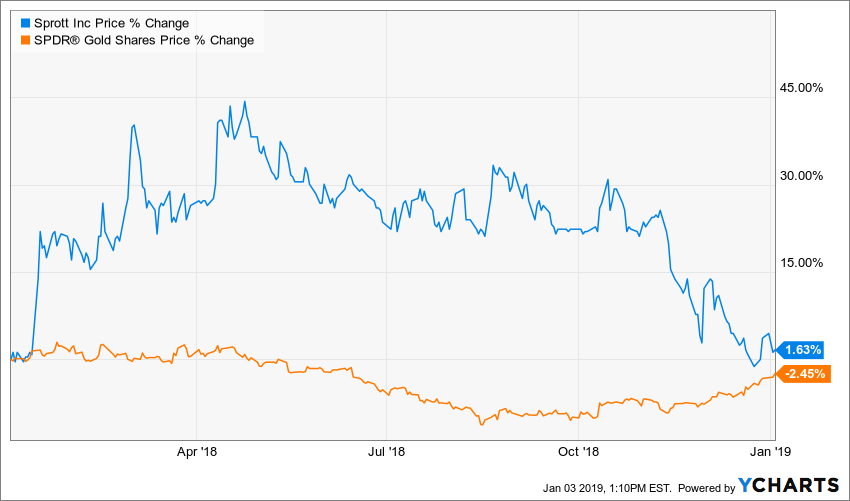 And even more recently, with gold in a bit of an uptrend since mid-August, Sprott shares have still failed to show any spark: