Bryan Perry hints at an investment... "you’ll not only be getting over three times more money than a one-year CD, you’ll also know that your money will be equally as safe" -- so what is it?

I haven’t written about Bryan Perry’s Cash Machine newsletter in several years, and I know that a lot of Gumshoe readers are interested in income investments and dividends… so I thought this would be a good one to sniff out for you.

The ad is for a subscription to his newsletter, of course (currently $49.95/yr, “on sale”), and though he dropped the “25%” from the name many years ago (when I first covered this one, it was called “25% Cash Machine“), he does still say that he aims for 25% annual returns from his model portfolios — including 10% income yields. Which is very ambitious for a dividend or income-focused newsletter, of course, but, well, it’s good to have goals.

Aiming for 10 percent dividend yields and 25% total returns means you’re probably going to be pushing the envelope a bit, so what is Perry hinting at today as his next favorite investment? Here’s the headline from the ad email I received:

“Enroll In the Next 24 Hours and Grab the Next Payday!”

We’re told that this is also a monthly payer (as opposed to quarterly, like most investments)… but what other clues do we get?

“Those who invested in this little-known security when I recommended it March of last year have not only collected twelve $7,400 paydays for a total of $88,800, they are smiling all the way to the bank.”

OK, so it’s at least been paying this yield for well over a year — and that wording makes it seem that this ad was first written back in March of 2019.

“And they’ll be collecting their own $951,912 payday along with Wells Fargo & Company, Bank of America, Morgan Stanley, and the Royal Bank of Canada.” 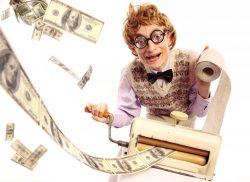 “Once You Grab Your First Payday,

“You’ll Never Put Your Money in a CD Again

“That’s because you’ll not only be getting over three times more money than a one-year CD, you’ll also know that your money will be equally as safe.

“This is why Wall Street’s biggest insiders are already in on this deal!

“Once you see how this fund can pay you this kind of high dividend safely, I know you’ll never put your money in a CD, Treasury bill, or low-paying dividend stock again.”

The numbers track just fine, the best one-year CDs currently pay about 2.25%, but that “your money will be equally safe” is a HUGE promise to make. CDs NEVER lose value, the return of your principal is guaranteed and insured after that year is up… if you tell me you’ve got a publicly traded investment that is that safe and also yields more than 8%, I have no choice but to think you’re delusional. Or lying.

But we’ll let that pass for the moment and focus on what the actual investment is… so let me feed those clues into the maw of the Mighty, Mighty Thinkolator.

Need an extra minute here, there’s a lot of snow to brush off.

OK, fine chugging along nicely… starting to get an answer…. and THERE! This is AllianzGI Diversified Income & Convertibles (ACV), a leveraged closed-end mutual fund.

So no, it is nowhere near as safe as a CD. It both owns investments that could fall in value, and it borrows money to leverage the returns on those investments &#8