I guess this is shaping up to be another “marijuana week” here at Stock Gumshoe… this latest pitch talks up a chance at making five times your money on “a marijuana stock opportunity that almost NO ONE is talking about yet.”

Which, of course, is music to our ears — we do love a good mystery!

The newsletter being pitched is Alpha Investor Report (“on sale” for $47/yr) from Charles Mizrahi, who has teased some interesting stocks for us in the past (the two that stick in my mind are Xilinx (XLNX) a couple years ago and Huntington Ingalls Industries (HII) several years ago, mostly because I missed those appealing long-term growers and was grouchy about it… though I do own some XLNX shares now).

And, like some other pot stock pitches we’ve seen, this one is sold to us using the “picks and shovels” metaphor — the idea being that in a gold rush, you want to be the one selling the picks and shovels to the miners, not the guy digging a hole in the wilderness and hoping for a score. It’s an appealing story, and one that has become easy shorthand for investors (we’ve been teased about “picks and shovels” plays on bitcoin, iPhones, actual miners, you name it), though, of course, it doesn’t always mean you’re going to get rich. After all, the shovel salesman doesn’t take nearly as much risk, but he does make a lot less money than the guy who discovers the gold.

Here’s a bit from the ad:

“The best way to reap true, lasting, life-changing profits is to identify the pick-and-shovel stocks that are fueling it.

“Like the company I’m going to shed light on for you in just a moment.

“My analysis indicates that this one stock alone has the potential to hand you up to 500% as the legalization of marijuana continues to unfold — with a greater degree of safety and dependability than any wild-eyed penny stock can ever give you.”

OK, so I’d get that 500% out of your mind… though he’s probably not too far wrong on the “safer and more dependable” bit, at least if you’re comparing this to profitless penny stocks. What else?

From the chart he shows in the presentation, that means it went from about $59 to $78 over some recent period of time.

What kind of “picks and shovels” does this company sell? Apparently it’s something to do with security. Of marijuana companies, he says that…

“The first is finding a safe place to store the mountains of money they’re making.

“The second is finding a safe way to move the marijuana itself….

“All of that cash on hand makes for a VERY tempting target for thieves.

“Likewise, with marijuana fetching as much as $3,000 a pound in some states, the marijuana itself makes for an irresistible target as well.

“As California edibles producer Mark Mason told Rolling Stone magazine: ‘We carry more cash than banks. You can’t walk into a bank and get $300,000 in cash. You’d make more money robbing us. It just feels like, wow, now that my business is completely legal, it’s more dangerous than ever.'” 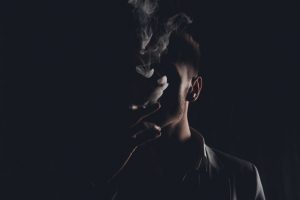 OK, so if you’re writing a hardboiled mystery about thieves, you’re probably thinking that marijuana is one of the last great cash businesses, and maybe that’s who your gang of robbers should target (sorry, I still miss Donald Westlake, his Parker and Dortmunder gangs would have had a field day with legal pot shops bursting with cash)… but what does that mean in terms of investing?

Well, we’re being teased with a security compan