Latest ads for Bull and Bust Report call the coronavirus drop a "buying with both fists" opportunity in these stocks.

A version of this story first appeared on January 22, when we first saw Christian DeHaemer’s ad. The ad has been very lightly updated in recent months and is being heavily promoted now, so I’ve gone through and updated this article and my thinking to reflect the coronavirus collapse and any updates the companies have provided since January. Enjoy!

Here’s a sample of a recent DeHaemer email pointing at the ad:

“… if you are a long-term investor like me, this pullback is a gift.

“It’s a chance to get your hands on some stellar stocks at a great price.

“That includes my top four stocks for 2020. I was already bullish on these stocks when the market was at record highs.

“Now that we can buy them at a discount, I’m buying with both fists.”

And now, on to the actual pitch, largely unchanged since January….

The “end of cash” story has been around for a long time, and it has fueled several waves of investment teaser ads over the past decade or so… which led me to wonder whether DeHaemer is pitching anything new or different in the ads for his Bull and Bust Report (currently $99/yr).

The big picture notion that “cash is dying” is not a shock or surprise, of course, we’ve all noticed that we use less cash and see card terminals in more places, and do so much more of our shopping online, but here’s a little taste of the ad to get you started:

“Don’t be surprised to find that in less than five years, money as you know it will be a thing of the past.

“Millions of Americans like you and me will be carrying just one thing: their mobile phones.

“And you know the four MVPs I mentioned earlier?

“They are the SAME companies set to dominate this massive $100 trillion industry — at home and abroad.

“Before the stocks go absolutely ballistic.

“Here’s a surprise, though…

“You won’t find a single one of the ‘Usual Suspects’ on my exclusive list of top buys today.”

So how is it that these companies are making money on the “death of cash?” More from DeHaemer:

“Behind the scenes, my four MVP companies had designed an ingenious system to siphon off profits from practically every digital transaction made around the world.

“The ‘New FAANG’ companies are busy cornering a $100 TRILLION market for themselves.

“Which is very possible…

“That’s $250 billion straight into their pockets.”

That’s essentially what every payment network and payment processing company does — they charge fees that amount to a fraction of a percent of the transaction. No surprise there.

And we’re told that these “MVPs” are going to shoot higher soon, because they’ve identified a “catalyst” that will spark the stocks….

“SPECIAL ALERT: The New MVPs are about to get another unexpected boost by February 29 March 25, 2020.

“That’s when I expect Facebook’s much-hyped Libra project to be dead in the water. …

“Once it does, that will add even more fuel to the prices of our “New FAANG” stocks. Why? Because there will be one less competitor to split up to $100 trillion in revenue with!”

I can’t say that I ever took Libra very seriously, frankly, but it is still not quite dead yet — they have been losing partners, presumably both because this facebook blockchain money transfer project has been a lightning rod for regulatory criticism and because it hasn’t really moved forward beyond the “concept” stage. I don’t think there was ever a huge risk that Facebook would earn a big portion of the digital payments business, but it is still possible (payment systems and networks have evolved differently in different markets, and the “FAANGs of China”, particularly Tencent and Alibaba, dominate digital payments in that country).

And this is basically a “marketing overpromise:”

“To everyone’s surprise, the old FAANGs have handed control of the lucrative payments opportunity to a new supergroup called the MVPs.

“I expect their share prices to go ballistic on or around February 29 March 25…
When Facebook’s Libra venture goes belly-up.”

Thankfully for the lawyers, “ballistic” does not have a precise definition, and “on or around” could also mean, well, anything. There’s a reason why ads lack precision on these points, even when they try to give you the idea that they know exactly what the future will hold… and that it holds imminent wealth. This change to the date was one of the few real updates in the most recent version of that ad that I’ve seen.

And yes, Facebook’s Libra blockchain project has been slowly withering for nine months now as partners pull out, though the attention it got was always wildly greater than its actual progress or, in my mind, potential.

Which means you’ll probably be a little disappointed to hear the Thinkolator’s results: DeHaemer’s MVPs are, in the order of the acronym, Mastercard (MA), Visa (V), Paypal (PYPL) and Square (SQ).

Not a tiny upstart or unknown company in the bunch, right? Also, sadly, not a company that I own (though I’ve owned a couple of them in the past), because they’ve all been extraordinary performers.

They aren’t small companies anymore, nor are they cheap by any rational assessment (though truly, not many companies that have any kind of growth are cheap right now, even after a 30% drop in the market) — Mastercard is still a $260 billion company after the March collapse, and that still makes them the “little brother” to Visa’s $370 billion (both are down by close to 20% from the February peak), and even upstart PayPal is at $116 billion as they get close to the five-year anniversary of their split with eBay. Only Square could really even be called a “midcap,” with a market cap of about $25 billion.

But yes, they are dominant — or at least, the big guys are. The days of any kind of real opening to disrupt Mastercard and Visa appear to be long past now, the revolution of “tap and pay” and paying with your cell phones still works almost entirely because it connects to those legacy Mastercard and Visa payment networks that incorporate essentially every merchant and bank in the world. That’s a tough club to break into.

Here’s an updated chart, including the peak and swoon over the past couple months now, of what those four stocks have done in the 4+ years since Square went public (which wasn’t long after PayPal separated from eBay): 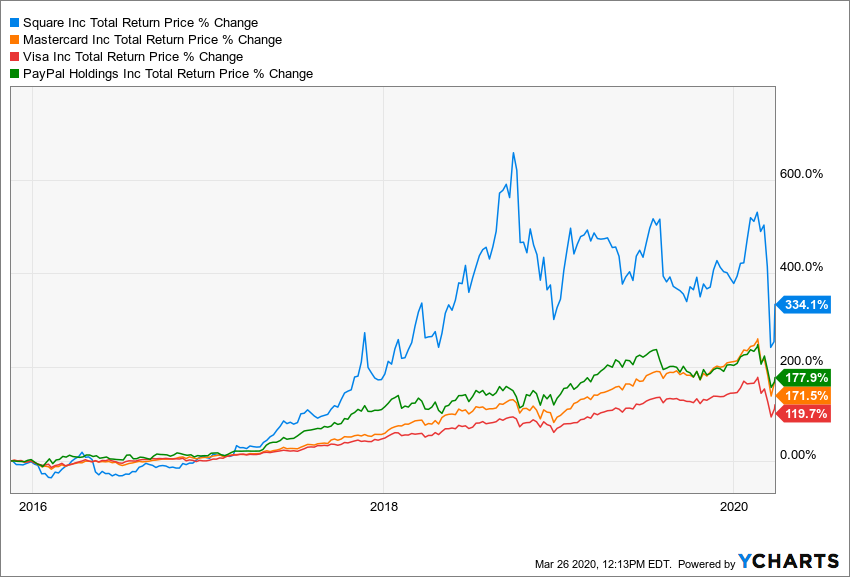 And in case you’re curious, that’s generally a little better than the performance we saw from the FAANG stocks over that same time period, on average…