What's the "secret stock" being dangled by Cabot Dividend Investor?

Quick and dirty today, dear friends — I’m running short on time, so we’re jumping right into a simple teaser solution for a stock that a lot of people hate, and a lot of people have made a lot of money from. The ad I saw was from Tom Hutchinson, who is chief analyst of Cabot Dividend Investor ($360/yr) and, well, he had my full attention as soon as he put “secret stock” in the headline

Here are the clues from Cabot Dividend Investor…

“Want to know a great stock that pays out a 6.1% annual dividend and has great growth potential too?

“… that’s on top of 49 years of growing dividend payments…

“This company sells a variety of products that fall more or less in the ‘vice’ categories of alcohol and tobacco.”

That’s enough to get an answer, most likely, but we do get a few more tidbits… it’s alcohol holdings “include some of the biggest, mass market brands as well as smaller, high-end product lines”

“… the coming legalization of marijuana across North America is yet another growth opportunity for the company.”

So it’s not just a “secret” stock, maybe someday it’s a “pot stock” too? The ad hints that they are “moving aggressively” into marijuana.

And we get a couple specific clues that should make things even easier for the Thinkolator:

“Through good management and buying back shares, per-share earnings have grown by more than 11% for the last 5 years.”

And the company took a hit to its stock price last year, we’re told, though it did better than its tobacco competitors… and kept growing that dividend.

So what’s the stock? This is, of course, dear old Altria (MO), the mostly-US part of the old Philip Morris (Philip Morris International (PM) was spun out a decade or so ago).

And yes, Altria has been probably the single best investment for the market in the past 75 years… at least, the best “regular” stock that didn’t emerge from nowhere and go bonkers, like Netflix (NFLX) or Amazon (AMZN). That outperformance has continued even in the much-more-regulated modern era for cigarettes, here’s what the chart looks like for ALtria’s total return compared to the market over the past 20 years (compared to the S&P 500 and a couple utility and consumer staples ETFs): 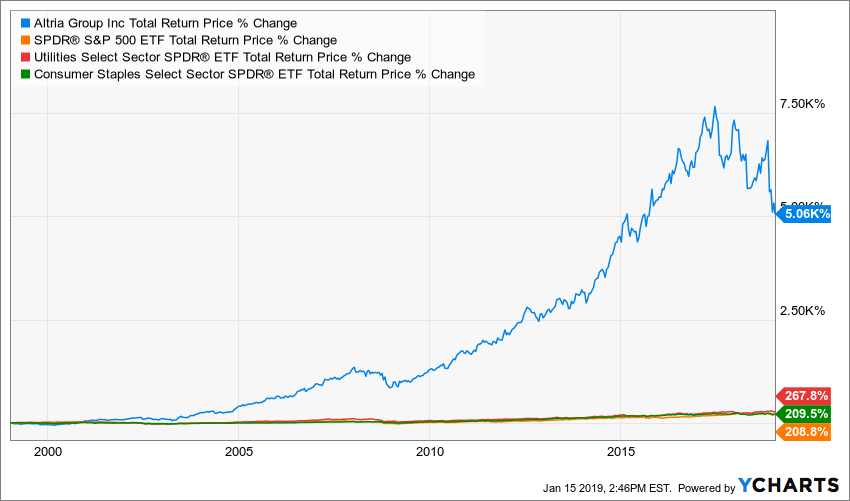 I’m not willing to own tobacco companies directly (I’m sure I have some in my mutual funds), and I can’t say that their recent decision to invest heavily in Juul Labs has me feeling any better about them, personally, but MO has certainly been a fantastic long-term investment.

Will that continue as smoking continues to fall? Well, that probably depends more on whether vaping becomes (even more) mainstream and keeps some of that nice fat profit margin for them, since nicotine addicts can be profitable customers whether they’re burning or vaporizing the stuff, or on whether they’re able to lever their way in to build or buy some big brands in marijuana, as I’d guess they would very much like to do (they’ve already agreed to buy 45% of the Canadian marijuana company Cronos (CRON) for $1.8 billion… with, somewhat like Constellation’s (STX) agreement with Canopy Group (CGC), the possibility of getting a controlling stake in the future with warrants).

They have been facing a long slow decline in smoking rates for decades, and massive taxation, but have also been able to raise prices to levels that we would have considered absurd 20 years ago — and enough people keep smoking to keep the cash register ringing quite nicely for them, so I don’t really know where the seesaw begins to pivot. Does the recent weak performance, and the regulatory backlash against Juul, mean that they’ve topped out and won’t be able to keep increasing cash flow? Or is this just another stumble for a dominant business that serves brand-loyal addicts? That’s the question I’d be asking about MO, but it’s also a question I would have been answering incorrectly over at least the past decade, to my financial detriment, so you might want to form your own opinion on this one.

Altria does have wine and beer investments — they own a wine business that’s essentially a rounding error on the income statement, and they still own about 10% of Anheuser Busch/Inbev (BUD) — but unless they decide to sell those BUD shares in a hurry the rise and fall of earnings will continue to be dominated by their dominant brands in cigarettes (Marlboro, with a 43% market share in the US, light years beyond everyone else) and in smokeless tobacco (Copenhagen and Skoal, which together have about 50% of the super-gross spitting market — yes, if you’re a chewer I still love you, and I’ll take that over your smoke going into my lungs, but that spitting in a cup thing is disgusting).

That dramatic outperformance over the past 20 years obscures the tough time Altria has had over the past year and a half, so here’s a shorter-term look, just for some perspective: