What's being teased by Bill Shaw for Stansberry's Commodity Supercycles?

Well, yesterday’s look at Steve Sjuggerud’s favorite gold stock brought a bunch of questions out of the woodwork about a different Stansberry gold teaser… we don’t often like to “pick on” the same publisher two days in a row, but we do aim to please — so that’s our topic for today.

The ad is for subscriptions to something called Commodity Supercycles, which looks like it’s a new “hard assets” investment letter (it’s being sold at $49/year, hadn’t heard of it before today).

It’s signed by editor Bill Shaw, who also edits Stansberry Gold & Silver Investor, which is a much pricier precious metals advisory ($2,500 up front, plus $49/month) — the only pitch of his we’ve looked at before was when he teased First Mining Finance (FF.TO, FFMGF) about two years ago. That’s worth noting mostly because it should remind us to treat marketing language with great skepticism — he talked that up as being maybe “the most lucrative speculation in our firm’s 19-year history” and predicted a huge year for gold in 2017, and we can now look back and say “not so fast” to both those predictions, which should help us be rational when looking at today’s prediction.

Because marketing language is so powerful, and I’m inclined to like the kinds of stocks teased here, I’ll start you off with a visual reminder of that fallibility… this is what First Mining and gold have done since that ad in August of 2017 (orange is First Mining, blue is the gold ETF GLD, with the gold mining ETF GDX (red) and the S&P 500 (green) for comparison): 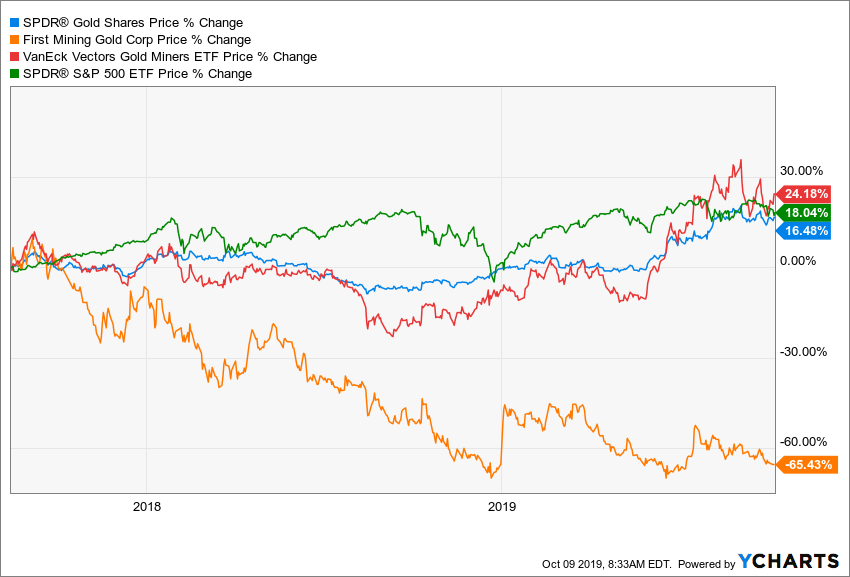 But what everyone’s looking for, of course, is another wild bull market in gold — like we saw in the first half of 2016, and before that in 2010-2011. And we’ve at least gotten the start of another bullish run for gold this year thanks to falling interest rates and growing global uncertainty, with gold up by 15% or so since January and the big gold miners (GDX) providing the typical 2X return on that (up 34%). So we’re primed to hope for more… and, perhaps, tempted to flee into gold as global politics stacks new bricks on the “wall of worry.”

So with that backdrop, what is Bill Shaw teasing? It starts out by sounding quite familiar, at least to anyone who has seen the many mining teasers that have been thrown at us over the past 15 years…

“Running in a small-town Nevada newspaper, a local business owner needed to raise cash to pay off an outstanding loan.

“NOBODY could have predicted what happened next.

“Put simply, the man who stumbled upon this ad discovered a secret my colleague Dr. Steve Sjuggerud has called:

Oh, great, so we’re going to see another pitch for royalties, aren’t we? More from the intro email:

“Porter Stansberry has said: ‘[This business model] will do well no matter what happens to the stock market.'”

And here’s some of the promo language:

“Today, we are at the beginning of a brand-new bull market – and I strongly believe we’re about to