Solving Curzio’s “One Bank to Hand Investors $60B” Tease

I haven’t written about a Frank Curzio teaser for a while, so when a few readers asked about his new “$60 billion paycheck” pitch I thought I’d take a look for you… this came as an ad for his Curzio Research Advisory, which is Frank’s “entry level” newsletter (he’s offering it at $79/year currently), and it’s got the cheeky “Bank Error in Your Favor” headline.

The ad also takes advantage of our collective anger about how the big banks behaved leading up to the crisis they caused a decade ago, and the turnaround by one of the most vocal bank critics, The Big Short’s Steve Eisman… here’s how Curzio gets us interested:

“The $60 Billion Paycheck One Bank Plans to Cut Investors Over the Next 3 Years….

“Eisman is one of the smartest analysts you’ll ever come across.

“He understands our banking system better than anyone in the world. He’s also one of the sector’s biggest critics.

“So, when the legendary analyst recently said:

“We should pay attention.”

That story is lent some weight this week by the fact that Warren Buffett’s Berkshire Hathaway just released its latest 13F (that’s the quarterly portfolio snapshot that institutional investors are required to release through the SEC six weeks after the end of each quarter), and the stories all over the media are about how Buffett is doubling down on banks — he added meaningfully to a portfolio that was already top-heavy with banks, buying into JP Morgan (JPM) for the first time in recent memory and also adding to US Bancorp (USB), Goldman Sachs (GS), Bank of New York Mellon (BNY) and PNC Financial (PNC), (though Berkshire also sold some of its shares of longtime largest holding Wells Fargo, which was eclipsed in size by both Apple and Bank of America in Buffett’s portfolio this year).

Banks are theoretically the beneficiaries of rising interest rates, since that means they’ll be able to charge higher rates on the loans that generate most of their revenue… though that’s probably less true than it was 20 years ago, since big banks no longer self-finance most of their loans with customer deposits and have to borrow to lend — which means that the yield curve can be as important as rising rates.

(The yield curve is the graphical illustration of the difference between short-term and long-term rates — so if a bank can borrow from the Federal Reserve at 2% and lend at 4% that provides a healthy net interest margin of 2%… but if the Feds go up to 3% and the bank can only up its lending rate to 4.5% because of competitive pressure or slower growth or inflation expectations or whatever else, then that cuts the net interest margin to 1.5%. For example, in January the one year rate for Treasuries was 1.92% and the 10-year was 2.46%, whereas now the 1-year is 2.71% and the 10-year 3.12%… so while rates are rising, the margin between those two has shrunk from 0.54% to 0.41% — doesn’t sound like much, but that’s a 24% drop in the potential margin because of the flattening of the yield curve. The year to date change and the particular maturities I used from Treasury’s chart aren’t necessarily specifically important to the big banks, that’s just an example of the trend that might be worrisome to them.)

And we’ve also been seeing more stories about the “shift to value” that some investors think is underway — which doesn’t necessarily mean that value stocks are going to start outperforming growth stocks for the first time since the crisis, but it does mean that’s a narrative that some pundits and investors are looking at and trying to build as we all try to figure out which stocks will do better in the future… and bank stocks have tended to be seen as “value” stocks.

So that’s the general backdrop… what is it that Curzio is pitching? Let’s check out the clues…

“… the large-cap banking sector is stronger today than any other time in our country’s history.

“Anyone telling you otherwise is either trying to scare you into buying something… or doesn’t know how to analyze a balance sheet.

“Not only is this sector dirt cheap… it’s one of the few that offer investors huge price appreciation potential along with steady income.

“And these positive conditions of rising yields and above-average buybacks are not expected to change anytime soon.

“One banking stock is trading at levels where our risk is minimal.”

The big banks have definitely been buyback-happy in recent years, they have generally gotten the green light from the Federal Reserve to begin their “capital return” plans over the past two or three years, after spending the first several years after the financial crisis and the bailouts being forced to shore up their balance sheets, and some of the biggest guys have embraced that with wild abandon, announcing huge buybacks as soon as they pass the Fed’s “stress tests” and get authorization.

But which specific bank? The clues are not exactly abundant, but this is what we get:

“One banking stock is trading at levels where our risk is minimal.

“That’s because it’s already trading at a significant discount to the industry… and it’s about to return $60 billion in capital to shareholders (in the form of dividends and buybacks) over the next three years.”

Frank also says he thinks the growth rate will accelerate faster than analysts are predicting, thanks to deregulation and higher interest rates, and that “the stock won’t be trading at these depressed levels for much longer.”

Thinkolator says the most likely match is… good ol’ Citigroup (C), which does indeed trade at lower valuations than most of the big banks on both a forward earnings basis and a price/tangible book basis.

Here’s what that relative valuation looks like in chart form, for the visual learners out there… this is what forward PE ratios have looked like for the big five banks (Citi, JP Morgan, Wells Fargo, Bank of America and USB) this year: 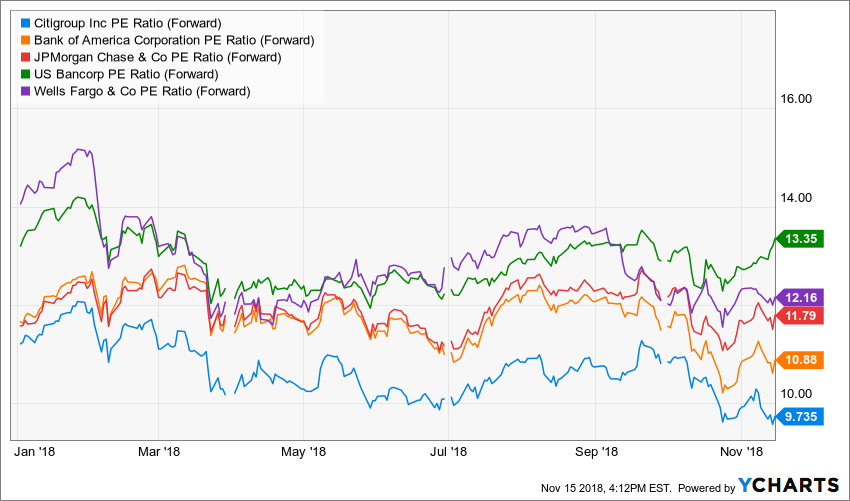 And here’s what the price/tangible book valuation has looked like over the past five years: 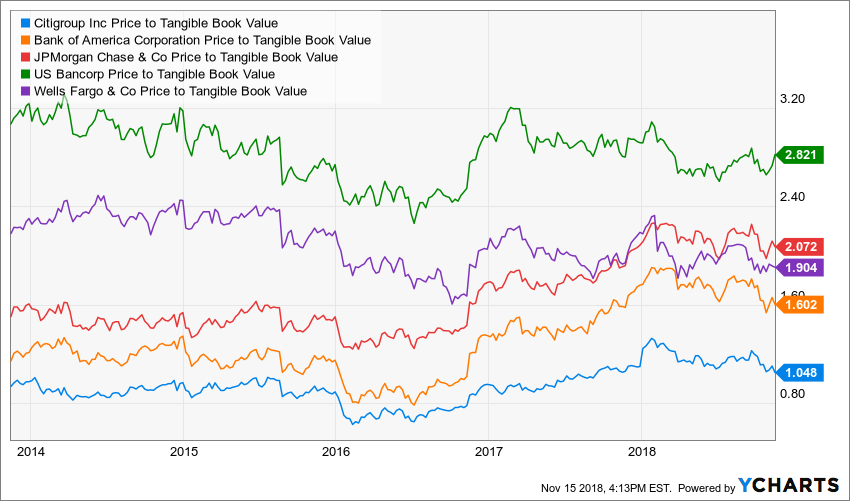 So yes, it’s cheaper… but it’s been cheaper for a long time, probably largely because it’s been a worse business (their return on equity and return on assets have both been much lower than the other big banks most of the time, even before those numbers went negative this year), so that may well mean that the downside is less risky than it could be for the other banks, but we should hesitate to assume that it will close the valuation gap “just because.”

Of course, being the bank that trades at the lowest valuation, and with weak operating performance, also means there’s room for improvement — which means that managing the bank better or succeeding with their restructuring goals could mean that they get a better valuation over time.

So how about growth? Curzio says his bank is going to outgrow the competition, thanks in part to years of restructuring, and that might be true — analysts have it penciled in for roughly 15% annual earnings growth on 3-4% revenue growth over the next couple years. That’s pretty similar to Bank of America (BAC), which is much bigger, but BAC is also valued a bit more richly.

BAC and Citi actually are pretty similar in other ways, too — they are the only two mega banks to be more than 20% below their average analyst price targets (BAC would have to rise 25% to hit its average analyst target of $34.16, C would have to rise 33% to hit its target of $84.41). They’re the two cheapest big banks by most measures, and arguably had the most “restructuring” to do over the past several years, so either one could really match up with Curzio’s big picture thinking… but Citigroup is the one that gets the nod from the Thinkolator, mostly because of the $60 billion hint.

Will it work? That, I dunno. Big capital returns should presumably help, and as a percentage of market cap Citi’s buybacks and capital return plans are a lot larger than those of its larger competitors (JPM at $360 billion dwarfs Citi’s $160 billion market cap… and BAC is almost twice as big as Citigroup, with WFC not far behind). It does intrigue me that this is pretty much the only one of the megabanks that Warren Buffett hasn’t bought… I don’t know if that’s because he’s focusing more on quality than on value, or if he dislikes Citi for some other reason.

I’m not an expert on bank balance sheets, particularly these massive guys, and Citigroup’s is tougher to figure than many, so I rarely invest in the large banks (with a large Berkshire position, I’m already getting some good exposure to that sector) — but the valuations are pretty appealing right now for most of them, dividends should grow nicely and buybacks should improve their per-share earnings as the Fed lets them tap the accelerator a little… and if the economy stays steady or grows, or “value” stocks return to prominence, they should presumably all do well.

On the other hand, news flow might deteriorate for the big banks if Trump’s deregulation goals gets slowed down by divided government, or if the yield curve flips because the Federal Reserve pushes forward faster than the market is ready to accept, so there could certainly be better buying opportunities for Citigroup and its peers in the future. Citi looks cheap, but cheap can get cheaper — it’s right at tangible book value now, but was well below book value for most of the past five years and traded down to below 2/3 of tangible book value as recently as 2016.

That’s my five-minute analysis — but it’s your money, so it’s your thinking that counts… do the big money center banks appeal to you as investments these days? Does Citi or one of the others stand out as more appealing? Let us know with a comment below.

Disclosure: Of the stocks mentioned above I own shares of Berkshire Hathaway and Apple. I sold some Apple earlier today, but will not trade in any of the stocks covered in this article for at least three days per Stock Gumshoe’s trading rules.

nvda just took a hit. Did anyone sell?