What’s Curzio’s “The End of Heart Disease” Stock and its “One Simple Device?”

We're told that "This one simple device could be the answer to America’s No.1 killer… helping to prevent 800,000 deaths starting in 2019… jumpstarting a $1 billion windfall… and sending one stock – trading on a special exchange – skyrocketing!"

“There’s a one-in-three chance someone you know could be saved by this new device.

“That’s because one in three Americans will die due to cardiovascular disease – the No.1 killer not only in America, but worldwide.”

And the ad says that…

“This one simple device could be the answer to America’s No.1 killer… helping to prevent 800,000 deaths starting in 2019… jumpstarting a $1 billion windfall… and sending one stock – trading on a special exchange – skyrocketing!”

So… what is it? Let’s check out the clues…

“One company has made it’s mission to eradicate heart disease… permanently.

“And now, it’s finally completed one of its most important projects in 85 years…

“It’s not implanted. No surgery required.”

And, of course, you can’t go finding these ideas on your own…

“You’ve probably never heard about this company before…

“And you’ll likely NEVER hear about it by watching the major news outlets or listening to the talking heads on CNBC or any other network.

“That’s because this company is not only largely unknown (for now)… it also trades on a special exchange.”

He says they are unique…

“this company has filed over 80 new patents related to this device.

“Right now, it’s the only one with this technology.

“And it’s set to dominate the field.”

And, of course, he makes a profit projection for you, dear reader:

“Based on my analysis, I see at least triple-digit upside potential over the next two to three years….

“I wouldn’t be surprised to see this stock return 5x your money….

So what is this new device from an old tech company? Frank says that he first saw it (and it “blew his mind”) at the Consumer Electronics Show in Las Vegas… and that it got FDA clearance at the end of 2017.

He calls this special report he’s selling “Killing America’s No. 1 Killer: How One WWII Era Company Could
Radically Change the Future” … and says that the company has an 85-year history, helping to launch the modern electronics industry and “leading the charge in automation revolution today.”

So what’s the stock? Well, I had to haul the Thinkolator out of the garage so I wouldn’t cough on the fumes this time, but after a little chugging we did get our answer… this is the Japanese company Omron (6645 in Tokyo, OMRNY for the US ADR).

Omron is primarily a industrial automation company, selling tools and equipment to make manufacturing more efficient, but they also have some smaller and fast-growing businesses in automotive electronics (mostly for safety and environmental controls) and healthcare, with a meaningful lineup of products that includes the device that I’m pretty sure Curzio is teasing here, their blood pressure monitor watch called HeartGuide, and it did get quite a bit of attention as a “revolutionary wearable” at CES this year. 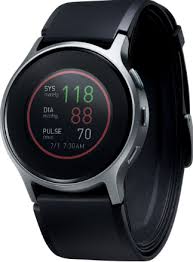 Which is apparently unique in providing a miniaturized blood pressure cuff as part of the watch band and therefore, they believe, provides better measurements than the typical estimates made by standard wearables now that can only really track heartrate, not blood pressure (like the Apple Watch, )… but this one product is not, of course, going to end heart disease forever. There are reasonable and impressive-sounding studies that say better and more consistent monitoring of blood pressure and other key health metrics could reduce stroke risk and the risk of coronary artery disease by 10-20%, which is certainly meaningful.

This isn’t Omron Health’s primary product, of course, they have a broad line of traditional blood pressure monitors, portable EKGs, a line of nebulizers, and some other healthcare-related products sold primarily to professionals that I don’t know much about… and Omron Health is just a 10-15% slice of Omron itself, so the impact of this particular smart watch is very likely to be limited unless it surprisingly takes off with sales in the millions.

More confirmation that this is our match? The company has been in business since 1933, and they have filed about 80 patents for their blood pressure-monitoring watch. They have about $800 million in cash and no long-term debt, and they do primarily trade on an overseas exchange (though the US ADR is plenty liquid for US investors who are interested, and has recently traded at fair prices — the stock closed at 52,200 yen yesterday in Japan, which is about US$47, and it’s trading within about 1% of that level now). They also are in the midst of a buyback program for the current year that they’ve authorized for up to 20 billion yen in repurchases, which is not quite $200 million but is close enough (that’s just over US$180 million).

And while the stock has bumped up again recently, it is also true that the last time it traded at this PE ratio, in 2016, the stock roughly tripled in the subsequent couple years. I don’t know if that’s the valuation metric Curzio is referring to, or what drove that, but it’s at least a reasonable match for the hints.

The stock has had a few sustained periods of outperformance in the past decade compared to the S&P 500, though it has come down pretty sharply each time that happened (and, to be fair, it has done wildly better than the average Japanese stock during that time)… here’s the 10-year total return for Omron, in US$, vs. the S&P 500 and the MSCI Japan index ETF: 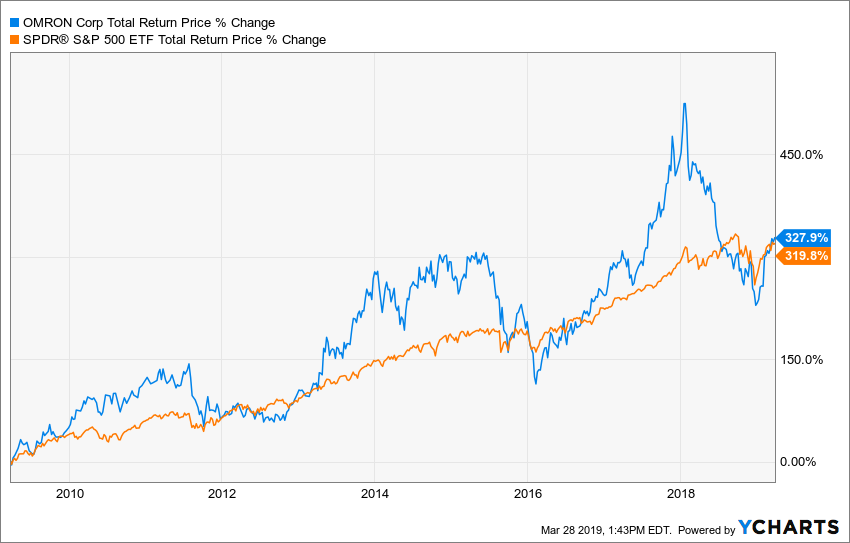 So I’d keep expectations for this particular product on the low low low side, personally, though I didn’t see the product in action like Curzio apparently did… but the company itself is pretty rationally valued and might be a fine idea as long as you don’t go into it expecting life-changing returns from the blood pressure watch.