This is only the second time I’ve looked into a teaser pitch for Frank Curzio’s Crypto Intelligence newsletter since it was first launched — the timing for that launch was pretty rough, the newsletter started promoting itself in the first half of 2018, when bitcoin was crashing off its first bubblicious peak and everyone was giving up on cryptocurrencies, so it’s good to hear that the newsletter is still around.  Even if it appears that Barry Cohen is no longer helming the service, (it seems to be Frank himself running Crypto Intelligence these days).

So what’s Frank pitching these days? He says it’s the “Goldman Sachs of the Crypto Industry” — a nice line, but what does it mean?

Here’s the headline from the ad:

“THIS COULD BE MY 6TH CRYPTO 10-BAGGER

“Learn How To Claim Your Stake In This Urgent Trade Below…”

And, for those of you who don’t much like farting around with all the different exchanges and wallets and “on ramps” to the digital currency world, where many exchanges seem sketchy and lots of little cryptocurrencies aren’t traded on the exchanges you happen to be familiar with (I agree, it’s a pain in the neck), this is not actually a cryptocurrency… Curzio is teasing a publicly traded stock:

“This is NOT some tiny crypto that could go to zero in the blink of an eye.

“It’s displaying the EXACT same ‘explosive indicators’ as some of my biggest crypto winners to date.”

He lays it on pretty thick, too…

“We’re in the middle of a once-in-a-lifetime transformation of our financial system.

“The Apples and Amazons of tomorrow are in their infancy today.

Maybe so, I wouldn’t argue that the financial system seems likely to evolve… but remember, it’s not just the Apples and Amazons of the future that are in their infancy today, a lot of the startups of this generation will go the way of Webvan, Flooz or Pets.com, too, forgotten or persisting as just a cautionary tale for the next generation.

Part of the argument, as is common among crypto enthusiasts these days (and makes sense) is that big institutional buyers have gotten into the space now, building up some more stability that might (fingers crossed) mean that last year’s spike in cryptocurrency prices won’t be followed by a repeat of 2018’s crash… in Curzio’s words:

“It’s clear what we’re seeing today is something completely different.

“Because this time a ton of big players with deep pockets are getting involved.

“Even Blackrock, the world’s largest asset manager with $8.7 trillion in assets under management, is beginning to “dabble” in Bitcoin.

“But it’s not just Bitcoin…

“Coinbase, the largest U.S. crypto exchange by volume, claims a “growing number” of its institutional clients have taken positions in Ethereum…”

And Coinbase will be going public next week, just FYI, it should start trading through a direct listing next Wednesday, April 14… so a lot of folks are looking to that as the next big attention-getter in the crypto space.

But what is it that Curzio is pitching today? We do get a few clues. Here’s a little bit from the pitch:

“First, the company is run by a number of former higher ups at Goldman Sachs, Morgan Stanley, Blackrock, and more….

“One of the biggest winners in the Crypto Intelligence portfolio, Voyager Digital, had the exact same ‘explosive indicator.’

“Its team is composed of former higher ups from Morgan Stanley, ETrade, and Uber…

OK, so we’ve got some bios to check… and we know it’s not Voyager (I went into Voyager Digital for a different pitch a few weeks ago, in case you’re curious about that one).

“It provides financial services and investment management to some of the most explosive names in crypto.

“That’s why I’m calling it the “Goldman Sachs of the crypto industry.”

“Like Goldman, it can grab pre-IPO shares of some of the biggest companies of tomorrow….

“In fact, they co-invest alongside massive banks like Citibank, Wells Fargo, and, yes, even Goldman Sachs.”

OK, so it really does investment banking to some degree, they’re not just a crypto exchange or bitcoin miner. What else?

“Which means it probably booked MUCH bigger gains off that growth.”

“The third reason is simple, but arguably the most important…

“And it’s revenue recently grew an insane 600% in just one quarter.”

So what’s our stock?

Thinkolator sez that we’re very likely looking at Galaxy Digital Holdings (GLXY.TO, BRPHF) as the solution today. Galaxy Digital did indeed help to take Silvergate Capital (SI) public, and Silvergate is a banking company that works with cryptocurrency businesses, and Curzio has bragged about recommending SI a few times. And the two companies are pretty similar, so that’s the best specific reason for the match. Not quite a 100% certain match, to be clear.

The other clues do hit as well, however. Galaxy Digital reported “comprehensive income” growth of about 650% last quarter (not quite the same as “revenue”, since a lot of that comes from the unlrealized increase in value of their cryptocurrency holdings, but close enough for this purpose). And their assets under management did more than double over the past six months — again, a lot of that is because those assets are cryptocurrencies, and Bitcoin has gone up a lot more than 100% over the past six months.

Here’s what the share price for Galaxy Digital looks like compared to the price of bitcoin, just to illustrate that connection (Silvergate would chart pretty similarly, for what it’s worth)… 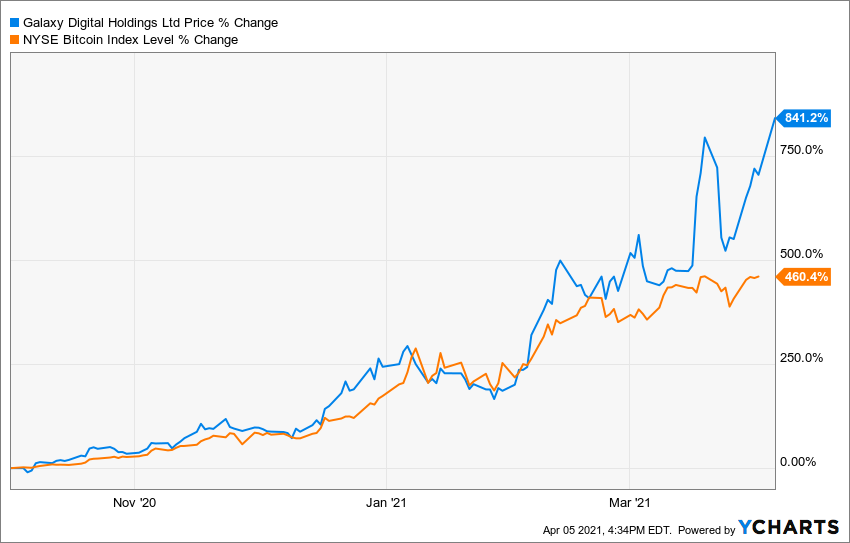 Galaxy Digital was founded by Michael Novogratz, who is a widely-followed cryptocurrency guy (and an alum of Goldman Sachs and Fortress Investment Group), and they came public in Toronto through a reverse merger with a shell company back in 2018. They are trying to bring institutional money into the cryptocurrency area. This is how Novogratz puts it:

“Our mission is to institutionalize the space, and promote the growth and advancement of the underlying ecosystem and technology behind digital assets and blockchain.”

I assume that this one will continue to be quite volatile, as pretty much everything in the cryptocurrency space is volatile… and companies who are facilitating investments and trading and lending in cryptocurrencies can easily be more volatile than the cryptocurrencies themselves. But Galaxy is arguably the closest thing to a well-established brand name for institutions who are looking to invest in Bitcoin (or whatever) — I don’t know whether they’ll maintain this leadership position as Bitcoin and other cryptos become more widely held by institutions and more banks and bankers get involved, but there is something to be said for getting in fairly early and becoming a leader. And Novogratz is certainly both well-connected and a strong cheerleader for bitcoin, having to some degree used it to rebuild his fortune back up to “billionaire” status after some of his Fortress hedge funds collapsed in the 2008 crash.

I do like the strategy of managing institutional money in this space, Galaxy gives big investment banks and wealth managers some funds into which they can steer their crypto-curious clients, so this is really kind of the opposite of the DeFi mission — I assume they’re loading fees on top of fees to manage these funds, counter to the “direct and simple” ideals of cryptocurrency trading that’s supposed to knock out the middleman and lower fees. But that doesn’t mean it won’t work — institutions are more comfortable paying fees to experts than they are taking risk on their own, it’s easier to tell your investment committee that you lost money in a Galaxy/Novogratz fund than it is to say you lost the private key to the endowment’s Bitcoin wallet.

And though I expect we’ll eventually have a lot more competition in the ETF space when it comes to cryptocurrencies, Galaxy is also subadvisor to one of the new Canadian bitcoin ETFs (BTCX) and will play the same role with the new Ethereum ETF from the same manager (ETHX). That’s not necessarily an instant game changer, but the business could scale quickly if it goes well.

And the kicker is that Galaxy is “actively preparing” to list its stock in New York… and that almost always drives a lot of new attention to a stock, so getting in on a Toronto-listed stock that is a few months from listing in New York can provide a little boost all on its own. No guarantees there, of course, if Bitcoin falls by 20% you can bet that Galaxy Digital will fall, too, but a more visible listing to attract more investors, particularly institutional investors, is generally a good thing.

You can check out the fourth quarter numbers from Galaxy in their press release if you’d like to follow up. They’re spectacular, as you would expect… and Bitcoin has doubled again in the first quarter of 2021, so when the next set of numbers comes out I expect those will be spectacular as well. W

here or when the ride ends, I don’t know, and I haven’t looked for skeletons in the closet or really torn apart Galaxy’s books… but asset management and institutional fund management are big and lucrative fee-earning businesses, so if you want a company that’s levered to institutional acceptance of cryptocurrencies, well, you could probably do a lot worse than Galaxy Digital.

Disclosure: I do own some Bitcoin and Ethereum and a handful of other cryptocurrency investments, and have accounts with both Coinbase and Voyager, but do not own any of the other investments named above… and I will not trade in any covered stock for at least three days, per Stock Gumshoe’s trading rules.

Have a friend who swears by the old Gods and the new that Galaxy DIgital is going to $120+ as bitcoin climbs, as 50%+ of their managed assets is in BTC. I didn’t heed his advice when BRPHF was in the$1.50~ range.. He’s done pretty well for himself from the crypto space, also made 900k+ from selling virtual real estate on DecentralLand. Something I don’t really get, as one can create virtual land, virtual worlds, virtual universes any time, anywhere with just another smart contract. What makes one virtual world more valuable than another… Times are moving real fast, difficult to catch up and staying with the trends.

Indeed, it’s been a wild year.