What's Jason Stutman hinting at in ads for The Cutting Edge?

Jason Stutman’s “upgrade” newsletter, The Cutting Edge ($1,499/yr), is out with a teaser campaign that promises you the chance at riches from “Charged Ore” … and, in fact, an actual sample of that ore itself as part of your subscription.

So what is “Charged Ore,” and what’s this little Nebraska mine that Stutman thinks will make you rich? Let’s dig in and see if we can Thinkolate some answers for you.

Here’s how the ad gets our attention…

“Whether it’s Tesla, GM, Nissan, BMW, or any other carmaker…

“They’re all looking at a rare energy metal that I call ‘Charged Ore’ to take electric cars into the mainstream.

“But what’s truly exciting for investors like you is the tiny $1 stock with a monopoly on America’s ONLY domestic source of this metal.

“To be blunt: I’ve never seen a mining play quite like this before.

Cool your jets… and know that when you’re getting clearance from your lawyers to run an ad, “in the coming months” is not a specific promise, particularly when it’s prefaced by “could.” Yes, anything is possible… but we knew that already. What’s likely? What’s probable? What’s the risk of loss?

Those are the questions to mull as we consider little junior miners… and the answer must almost always be “100% of my capital is at real risk of loss.” So try to keep that “risk” thought in your head as we go along, right next to the dreams of 1,000% gains.

But let’s move right on to the clues. What is “Charged Ore?” Some hints…

“At a quick glance, you might confuse this silvery metal with iron.

“But that’s not why Bloomberg calls it ‘The Metal That Everyone Wants to Buy….’

“Before a recent scientific discovery, Charged Ore was mainly used to produce stronger, lighter steel. Just $9 worth of this metal could reduce the weight of a car by 100 kg….

“But it’s most important use — and the reason why it costs seven times more than copper — is because of the opportunity I’ve shown you today: It’s taking electric cars into the mainstream.

And he goes on to imply that batteries need to use this “Charged Ore” to improve their recharging speeds — which he says is critical for mass adoption of electric cars.

Well, this “Charged Ore” is niobium, a niche metal used mostly in steel alloys that also has some use in superconductors (like in CERN’s large hadron collider in Switzerland, or in MRI machines)… and there are indeed battery chemistries using niobium that are much faster to recharge, like Toshiba’s titanium-niobium oxide lithium batteries that use niobium in the anode (replacing the graphite anodes typically used in lithium batteries, and upgrading the original Toshiba SCiB battery’s titanium oxide anode). 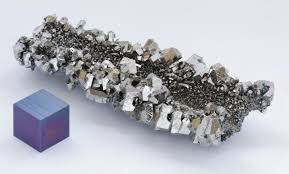 Those Toshiba batteries are not yet commercially available (the original SCiB is, without niobium, but the new ones are perhaps a year away), so I have no idea whether batteries are likely to become a major niobium demand driver. Right now, it seems that niobium demand is almost entirely from the makers of steel pipe for oil and gas pipeline