Latest teaser pitch for Disruption Investor says "One $4 Stock is the Key" -- so what's the real story?

This recent ad from Stephen McBride for RiskHedge’s Disruption Investor ($99/yr) gets our attention with a popular image that’s both been widely used as a meme and cited as an example in AI presentations… I don’t know who owns the image at this point, but I’ve seen it so many times across the web that I guess I can share it here: 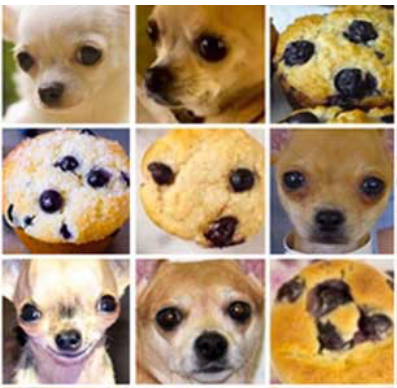 The basic idea is that being able to distinguish the chihuahuas from the blubbery muffins is a “test” that trips up most “computer vision” and artificial intelligence programs — though in fact, a lot of them seem to do pretty well on the test in distinguishing dogs from muffins, even if humans are still a bit better.

And McBride tells us that he sees the improvement of “computer vision” being the key to the next breakthroughs in technology….

“… getting a computer to see—and understand what it sees like you and I do? Well that’s been the most difficult challenge yet!

“The greatest minds in the world have been at it for years… and results are spotty at best, like dogs and muffins.

“But once a computer CAN see like a human… it will unleash the next great leap forward for computers and what we can make them do.”

And since this is an ad, the “breakthrough” is, of course imminent and in the hands of “one little company” — here’s some more from the pitch from a recent email that RiskHedge sent out headlined, “will this new technology save us from the next COVID-19”:

“Buying this stock could be like buying Amazon before e-commerce… Netflix before streaming… Apple before the smartphone… or Intel before the memory chip. Here’s your chance to buy an honest-to-goodness life-changing winner.”

“And we are this close to making it happen. One more breakthrough may be all we need. And I believe that breakthrough is just months—maybe weeks—away.

“Billions Are Pouring In

“It’s no surprise then that billions of dollars in research money is pouring into teaching computers to see.”

So this is a pretty typical kind of teaser ad — describe the huge potential market and a dramatic technological evolution, on which hundreds of huge companies like Alphabet, Microsoft and Facebook are spending billions of R&D dollars, and then imply that the profits will be funneled to a little company you’ve never heard of. I first saw this ad since May 13, by the way, in case you’re keeping track of the urgency of a particular day, and have gotten new copies of it every few days since then so it still seems to be an active promotion.

“Because today, I want to tell you about a company that is on the frontier of helping computers understand what they see…

“And its breakthrough will completely revolutionize life as we know it.

“This new technology will soon be in every smartphone, tablet, laptop, and desktop. It will be used in practically every industry around the world.

“But all my research says this incredible breakthrough in Computer Vision is just days or weeks from being announced to the public.

“And if you move quickly—before the big news that could happen any day now—this $4 stock could hand you the kind of carefree retirement most people only dream about.”

So then the idea starts to narrow a bit, to focus on a medical device of some kind…

“The FDA is so excited about this brand-new technology that it awarded it the rare Breakthrough Device Designation….

“Approval of this new technology could come any day.

“And when it does, this $4 stock I’m going to tell you about could deliver up to 1,000% gains or close to it overnight.”

That’s apparently based on lots of examples of drug stocks that shot up dramatically higher after approval, though we should keep in mind that medical devices often are less dramatic than drugs when it comes to the stock market — whether because of prices, or just a lower level of uncertainty about FDA approval, the stocks don’t tend to move as dramatically on FDA decisions. There can be moves, for sure, but 1,000% moves are really based on “surprise” — a drug did dramatically better in trials than expected, or gets approved when a delay was expected. Likewise, 50-90% drops are based on “surprise” results as well, in the other direction.

So what does this device do? More from the ad:

“This device uses Computer Vision to diagnose one of our most devastating diseases… long before a single symptom appears.

“Imagine waking up tomorrow morning and grabbing your smartphone as usual. But before checking the news or texting your kids, you open up an app and stare into your phone’s camera for three seconds to take a quick scan of your eye.

“Then, while you go on about your morning as usual, that app will be making a 3D scan of your eye and running extensive diagnostics using Computer Vision technology to test for early signs of Parkinson’s disease.

“As soon as FDA approval is announced—which could happen any day now—a simple eye scan will diagnose Parkinson’s years before someone experiences a single symptom.”

“Initially, this device will be used in doctor’s offices or hospitals. But imagine detecting a disease—before you have a single symptom—simply by looking at your phone!”

And following that, McBride goes into the many other areas where this technology might be used, or is possibly already being tested… including, just for example, viral outbreaks that spread fevers…

“Now imagine simply walking past an airport scan with advanced eyesight that can detect body temperature down to a tenth of a degree. It would instantly know if a passenger has a fever and should be tested and quarantined during a pandemic.

“Imagine the peace of mind of not having to go to a crowded doctor’s office or emergency room to be tested in the next pandemic.

“In the midst of the coronavirus, doctors are already moving to telemedicine. Right now, it’s virtual checkups. But imagine when nearly any diagnostic test can be conducted from your smartphone and results immediately given to you—without stepping foot in a doctor’s office or lab.”

And he goes beyond that in foreseeing the future that might evolve from here:

“Innovators are already working on health apps that can diagnose thousands of different medical conditions. Soon these apps will be pre-installed into smartphones, laptops, and desktops the world over. And I have no doubt people will want that phone!

“Imagine it… your phone is a tiny EKG machine that can check your heart rhythm.

“Worried your kid has an ear infection? Take a picture of the eardrum and the app will tell you.

“Diabetic? Automatically control your insulin levels with this app.

“Fever? Scan your forehead and instantly know if you have the latest scary virus.

“Based on my exhaustive research, I am confident saying… healthcare on your smartphone is hands down the greatest revolution in computing since the internet.”

That future, even if it emerges, will not all be in the hands of one company, of course… but it’s helpful to have an imagination when you’re investing in growth stocks, since the best profits are made by being able to see around corners a little bit and having some confidence in future developments. We just have to keep our feet on the ground as well, with some discipline in looking at other factors like valuation, competition, and actual financial results.

“Right now, this company’s market cap is $400 million. But with upcoming FDA approval and its line of innovative products, it could easily soar to $5 billion at a breathtaking speed….

“For my $4 small cap, diagnosing Parkinson’s is just the beginning.

“Right now, this small cap’s eye-tracking device is quietly being used by researchers and other household names on incredible healthtech applications….

“Like the researchers at Osaka University who are using this small cap’s eye-tracking innovation to diagnose autism.”

Apparently there is other work on using eye tracking for developmental screening, too, but there’s also some more direct eye health progress…