What are they touting as their "new Best Dividend Stocks List pick?"

During these crazy market moves, a lot of us are keeping in the back of our mind a notion along the lines of, “hey, this might be the chance to buy something cheap… but it better be really, really good!”

And for many of us, that means our minds drift to “blue chip” type stocks — the companies that you’ve long admired or wished you had owned for the past few decades of extraordinary and steady growth, but that always seemed too expensive. Maybe now’s the time that we can finally stomach buying some of these?

It’s not easy, of course — when readers have asked about when it’s OK to buy during this coronavirus collapse, I always respond that there’s no one point that will be perfect, and repeated the old saying that “nobody rings a bell at the bottom,” but my favorite indicator is the vomit test… if pressing the “buy” button in your brokerage account makes you want to throw up, that’s probably an indicator that it’s time to start buying. I have been doing a little buying all the way down, including last week, (along with some selling as stop losses hit), but I favor making lots of small (usually very small) decisions over trying to make one big one… there’s no rush.

And in the abstract, the notion of “upgrading the quality” in your portfolio is a nice way to think about getting something good out of this horrible global crisis. As everything seems to fall together, maybe we can sell the companies who we know are not top-tier or put some of our idle cash to work, and use the moment to buy the giants who we know (or hope we know) will survive and thrive in the end.

So with that in mind, I’m stepping away from the “urgent briefing” ads for the moment and looking into a teaser pitch from Dividend.com — they hint at a stock that just “made a comeback” to their “best dividend stocks list” — they’re selling their Dividend.com Premium service ($149/yr).

(As an aside, is anything more annoying than every newsletter publisher hosting an “urgent” video briefing that purports to be a public service for a stricken country, offering guidance for panicked investors, but is actually a sales pitch centered around a stale stock pick they’ve been trotting out for six months? Don’t worry, I’m sure we’ll cover plenty of those in the weeks ahead as well).

So what is it we’re told about this dividend growth stock? Here’s the intro:

“The coronavirus has upended the markets. Global growth is slowing and the world’s economy appears to be heading towards a recession. For investors, the time to take risk isn’t now. Investors should be focussing on firms with large moats, big competitive advantages and strong demand even in the bad times. And no other stock fits that description better than our new Best Dividend Stocks List pick in the consumer sector.”

That’s fairly comforting language, so this is less likely to lead to hyperventilating than the pitches about COVID-19 vaccines or imminent bankruptcies and business closures… what clues do we get about the actual stock?

“Our pick is one of the largest retailers in the world and created the category in which it operates. With tens of thousands of stores across the world, our pick has been able to use its size and scope to be a low-cost leader. This focus on low prices and a broad basket of goods has given our pick tremendous staying power in times of trouble.”

OK, that certainly narrows it down a lot — but it could still be a bunch of different companies, from Costco to Walmart to TJ Maxx, and we could include lots of specialty discounters and the various Dollar store chains and some Supermarket-style grocers in there as well.

What other clues do we get?

“With new apps, in-store tech upgrades, ‘click-and-collect’ and a series of shrewd DTC buyouts, our pick has quickly become one of the leaders in the online shopping space as well.”

“DTC” is “Direct to Consumer,” in case you’re wondering. But yes, this also doesn’t really narrow it down — all of the traditional retailers are desperately trying to remain relevant by building online businesses, with some doing much better than others.

There’s even a coronavirus mention in the ad, which I guess is required to get our attention these days:

“… with the coronavirus continuing to shift our shopping habits, our pick is poised to keep the growth going.”

“Huge moat and recession-resistant nature allowed it to pull in a record level of sales last year….”

And we’re told that yes, this does pay a dividend (you’d assume so, no, from a Dividend.com ad?) — with a payout ratio of 43% that is described as “healthy,” a current yield of 2.06%, and a recent dividend increase of 2% with a “four decade” history of increasing the dividend.

Well, sometimes the most calming idea or answer is a boring one, and that’s the case today — this is a tease that we should buy Walmart (WMT).

And since Walmarts are among the few stores that are open and still doing heavy sales volume in this world of toilet paper hoarding and “stock up for quarantine” shopping, the stock has held up much better than most — so while it is indeed a defensive name and a deep-moat stock, thanks in part to the fact that it’s the only grocer and mass retailer available to millions of Americans and tends to be the go-to retailer for customers feeling the impact of recessions… and while Walmart has been talking about beefing up the business and hiring, along with Amazon, while so many others are closing down… the stock has not really come down to “bargain” territory during this coronavirus panic.

Here’s what that looks like in chart form — with Walmart in blue, Amazon (AMZN) in orange, Kroger (KR) in red (that’s the grocer that Berkshire Hathaway started buying last year), Costco (COST) in purple, and the S&P 500 in green…. 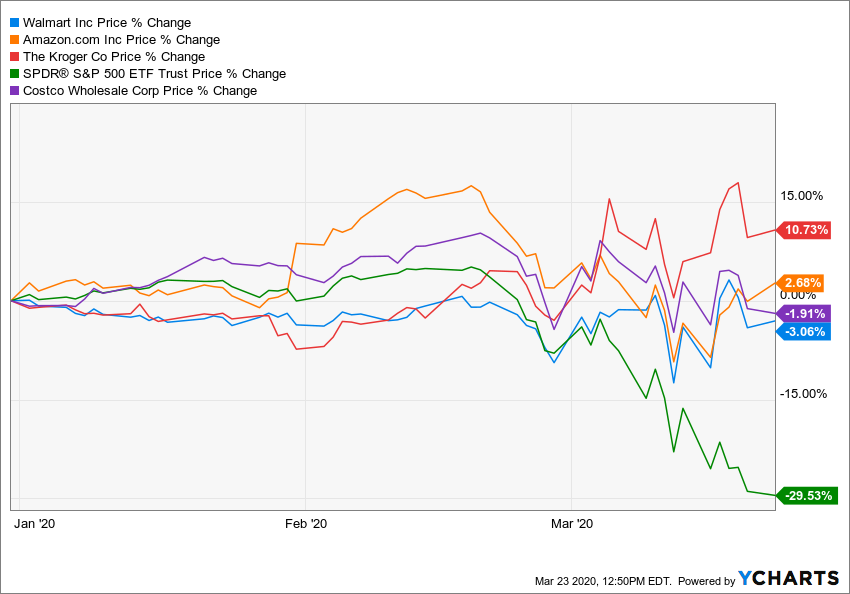 Walmart will probably post relatively steady revenues during these quarters of really direct coronavirus impact — they will be one of the beneficiaries of the “stock up” moves, along with other grocery stores and folks like Costco, though their costs are also rising and people will probably be buying more groceries, which are low-margin, and less of their higher-margin products in the other departments of the store. It is likely to continue to be relatively immune to virus panic, unlike a lot of stocks, though a deep recession (or worse) will certainly hurt Walmart — probably not as badly as many others, I imagine, but a shrinking economy and skyrocketing unemployment, should those things be persistent, would bring down numbers for essentially everybody.

For some perspective, I thought I’d go back and see what happened to Walmart during the 2008-2009 crisis… and it turns out that the stock climbed nicely in 2007 and the first part of 2008 as what I’d interpret to be somewhat of a “flight to safety” trade (it’s dangerous to assign a narrative to a stock chart, but that’s roughly how I remember thinking about WMT at the time as well), but then once things really fell apart WMT fell pretty sharply into late 2008… though when the March, 2009 bottom hit it was still roughly flat with the price it had traded around for much of 2006 and 2007 while the S&P 500 was down by roughly 50%. 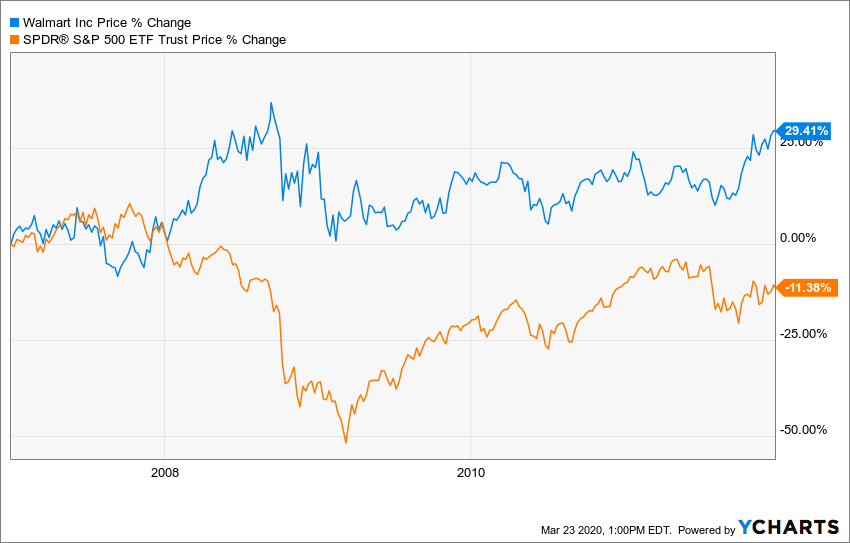 That doesn’t mean it will happen the same this