Every now and then a reader sends in a question about one of the stock ideas teased by dividend.com, which is a service that looks for, you guessed it, dividend paying stocks.

Their standard “tease” is that they send around some hints about the latest stock they’ve added to one of their “best” lists, but will block out most of the details until you subscribe… and I know that lots of Gumshoe readers are interested in earning dividend income… so, can we name this particular one for you?

Here are your clues:

“Dividend.com has added an international pharmaceutical giant to the Best Dividend Stocks List and removed an industrial basic materials company from the list.

“One of the biggest trends for the long haul happens to be rising healthcare demand. On the one hand, our rapidly aging population is requiring more therapies to keep us going for longer. On the other, rising incomes in emerging markets and other nations are allowing people to tap into new healthcare solutions for the first time. The combination of these two pieces is creating one heck of a bullish tailwind for the healthcare sector.”

And then a few more specific tidbits…

“One of the world’s largest pharmaceuticals…

“robust portfolio of drugs – currently numbering over 30 as well as a few blockbuster franchises.

“Recorded revenues of more than $20 billion last year – a 7% increase over the previous year’s number.

“… likely to repatriate close to $9 billion in overseas earnings.”

And, when it comes to that all-important dividend…

Which is not, of course, a top-secret unknown stock — that’s not the point of this pitch, which noted that it’s one of the world’s largest pharmaceutical companies and already has lots of drugs and big cash flow and some blockbuster products. The point they’re making, I suppose, is that this dividend is more appealing than most.

Are they right? To some degree, it’s splitting hairs — the big pharma stocks are all facing similar regulatory risks related to drug pricing, most of them are trading near all-time highs unless they’re on the verge of a major “patent cliff” problem when their tentpole drug is losing patent protection, and they pretty much all pay solid and growing dividends. In Lilly’s case, it’s a forward yield of 2.6% now, after they raised the dividend by 8.1% in February.

Lilly does not quite have that rarefied “dividend aristocrat” status — they have cut or paused the dividend from time to time in their 40+ year history of paying quarterly dividends, most recently when they kept the dividend flat for several years coming out of the financial crisis, but the general tendency has certainly been to increase the dividend over time, and they have started to string together a few years of dividend growth again now, with four years in a row of dividend increases, and this latest hike was their largest since 2008.

They have been admirably consistent on the top line, with year-over-year growth in the 8-10% range almost all the time over the past decade (there were some exceptions, in 2013 and 2014, when revenue dipped), and they have a very manageable balance sheet, so if their drug development continues to be solid the company will probably continue to do well… but unless you want to study up on exactly which big pharma stock you think will outperform the others, and take the risk of specific drug development problems that might hit any of them, you might just as easily go with a basket and cut your risks and the level of work you have to do — in the big picture, the stocks have largely traded en masse as we wade through the latest version of regulatory reform and pricing outrage, and most have been relatively weak… though yes, Lilly has done better than most.

Here’s the chart of the total return for the past three years of the big pharmaceutical stocks, as represented by the iShares US Pharmaceuticals ETF (IHE): 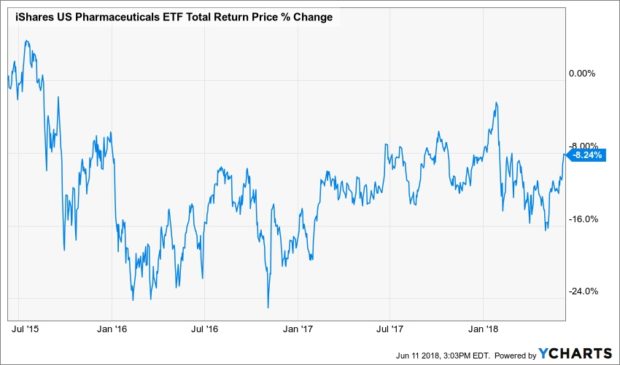 And here’s the total return of a selection of those big pharma stocks over that same time period:
<img loading="lazy"