Dividend.com teases a stock that has "pretty impressive tech-like growth for a garbage company."

Every once in a while I think it’s important to get some balance into our thinking… we can’t obsess over growth every day, so now that the world is opening up and inflation expectations have people in a little bit of a growth-stock panic again, I thought I’d take a look at something, well, more boring.

And right there in my inbox is a good candidate — Dividend.com is selling their Premium service ($149/yr) by pitching an “environmental services pick” that they say “continues to thrive during pandemic times”… so what is it?

“Trash isn’t exactly glamorous, but what it lacks in excitement, it makes up for in steadfastness. Despite shifts in how we work and play, trash hauling remains a lucrative business and provides plenty of cash flows/dividends for investors. And our Best Dividend Stocks List pick in the sector was one of the main beneficiaries.”

OK, we’ve looked at trash stocks before, from time to time, and we know that they generally took a pretty good hit last summer when offices and restaurants closed… sure, we generated a lot more trash at home, but they lost a lot of good customers. Which one is Dividend.com pitching? Let’s check out the clues…

“Thanks to rising industrial activity and the re-opening of the economy, trash volumes have already started to rise. Our pick has been quick to capitalize on the change. Moving forward, this new normal creates an interesting environment where both residential and commercial demand is higher…

“… management at our pick estimates that for the full year, revenues will grow by more than 12.5%. That’s pretty impressive tech-like growth for a garbage company.”

“Thanks to aggressive cost cutting, investments in technology and continued price improvements, margins have boosted significantly. As a result, earnings jumped by more than 14% during the first quarter of 2021, while cash flows surged by 44% year-over-year.”

Other clues? They have “over $10 billion in annual revenues,” and we’re told that the dividend was increased by “nearly 6%” last quarter, with a payout ratio of 52% and current yield of 1.56%… and they had “more than one billion in free cash flows” in that quarter, while earnings grew by 14%, and cash flow by 44%.

Sounds fairly decent, no? That’s not a huge dividend, but dividend growth is our friend. So what’s the stock?

In some ways, those clues could point us toward either of the two largest US trash companies, Waste Management (WM) and Republic Services (RSG). WM is the larger player, with revenue of about $15 billion (RSG $10 billion) and a market cap of $59 billion (RSG $35 billion), and WM tends to get a slightly higher valuation than it’s second-place competitor, but they are extremely similar. Just to give you a little context before we dig into which one matches these clues better, here’s the 5-year chart for both (That’s WM in blue, RGS in orange, and the S&P 500 in red): 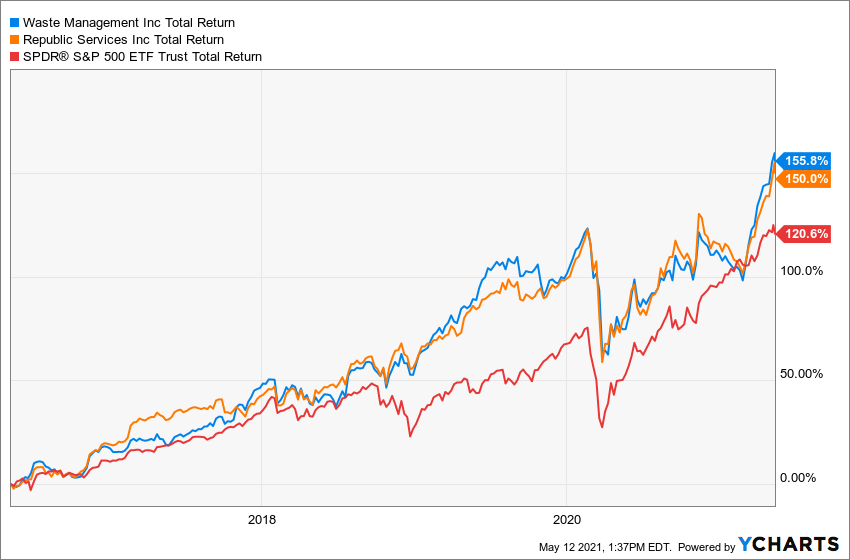 So it’s frankly a little bit silly to work really hard to distinguish among the two, they’ve both done extremely well, have similar management strategies and balance sheets, and have similar outlooks and valuations…. it’s perhaps a little easier for RSG to grow faster, given its slightly smaller size, but it’s also a business where network effects and large asset bases (like landfill ownership) make a big difference, so there’s also some advantage in being larger. Both companies reported strong first quarter results as commercial wasge volumes started to pick up, and both raised their forecasts for the year. Ready to split hairs?

About two weeks ago, WM reported $1.1 billion in “operating EBITDA” and $865 million in free cash flow, and posted 14% growth in adjusted EPS in the first quarter, and their revenue growth guidance was 12.5-13%. They use lots of different kinds of ‘cash flow’ in their announcements, but their “net cash from operating activities” did go up by close to 44%, that line had 46% growth year over year. Their dividend was raised from 54.5 cents to 57.5 cents in February, so that’s an increase of 5.5% and a current yield of 1.59%. WM&#