What’s Empire’s “Buy This SPAC on October 8” Pitch About? Enrique Abeyta says it’s a “Pre-IPO deal that could make you 25 times your money”

Special Purpose Acquisition Companies (SPACs) are the flavor of the year on Wall Street, following big high-profile SPAC-fueled IPOs like DraftKings (DKNG) and Virgin Galactic (SPCE), and we’re seeing a bunch of newsletters and financial pundits try to leverage that popularity… the latest is Enrique Abeyta, who is launching a SPAC-focused newsletter on Thursday for Empire Financial Research (title and price unknown at this point, the pitch for the event is here if you’re curious).

And they also hint at the deal that Abeyta is going to highlight for this launch, so shall we try to ID it for you?

OK, you got it. I can’t resist solving a puzzle. Here’s how it’s pitched in the teaser for the event:

“On October 8th, we’re airing the deal of a lifetime.

“It’s called a ‘SPAC’… A type of deal you’ve probably never seen before.

“A chance to invest in what could soon become the most exciting new company in America… essentially BEFORE it goes public. Like a Pre-IPO, but even better.”

OK, SPACs are surely exciting for investors these days… but there have also already been more than 100 new SPACs that have launched just this year, so which SPAC is it?

“The man behind the SPAC we’re sharing on October 8th is one of the most connected dealmakers in Hollywood. He’s worked with Tom Cruise… Sylvester Stallone… and helped relaunch the James Bond franchise…”

OK, so given the relatively small world of SPAC sponsors that’s probably enough… but let’s just make sure by checking the other clues…

“The last time he launched a deal like this (in 2019), you could have quadrupled your money in just 6 months!”

So that confirms we’re being teased about a SPAC sponsor who has done this before. Other hints?

“He’s the former CEO of the studio that produced The Wizard of Oz! His business partner is a former co-president of Sony Entertainment.”

And that’s about it. Ready for the Thinkolator? It takes but a few minutes to pour in those few cups worth of clues and get the Thinkolator chugging, and only a couple seconds of actual work to get our answer: This is Flying Eagle Acquisition Corp (FEAC).

Flying Eagle Acquisition Corp. is the sixth SPAC that has been launched by Jeff Sagansky and Harry Sloan, who are almost certainly the two Hollywood dealmakers teased by Abeyta, so it has gotten a fair amount of attention — these guys aren’t rookies, and, in a world where your latest hit is all anyone cares about, they’re also riding pretty high on their last deal right now… their fifth SPAC, launched about a year before this one, in the Spring of 2019, ended up making a deal to take DraftKings public. That was Diamond Eagle Acquisition (DEAC), which became DraftKings (DKNG) after the merger was completed, and is now widely seen as the most successful of the recent crop of SPAC mergers (more on that in a moment).

Will Flying Eagle’s next deal become another DraftKings, Nikola, Hyllion or Virgin Galactic? Or will it falter like many lesser-known SPAC deals have done in the past? That depends entirely on what kind of deal Sloan and Sagansky have come up with this time, and, at least in the short term, on whether that idea catches fire with investors… and that deal has been announced, so what is it?

Flying Eagle will be merging with Skillz to take that mobile gaming company public, and if we assume the deal is approved by all parties (it probably will be, the share price is signaling no trepidation on that front), then the combined public company will issue a lot more shares to current Skillz (private) shareholders and new institutional investors (at $10 per share), and be renamed Skillz, with the new ticker SKLZ, with supervoting shares meaning that Skillz leadership will maintain voting control of the company. The deal will probably be completed before the end of 2020, assuming no surprises, but I don’t know if the actual FEAC shareholder vote has been scheduled yet.

The deal was announced on September 2, and caused the stock to jump by about 25% right away. Like many SPACs recently, it is a combination of an existing business, the cash from the SPAC ($690 million held by Flying Eagle), and additional private investments being made as part of the deal by institutional investors. Those large investors are putting in another $159 million in cash, according to the initial press release, but that release also noted that Skillz expects to have a closing cash balance of $250 million once the deal closes… that’s the minimum, Skillz insiders can sell some shares as part of the deal and existing Flying Eagle shareholers can redeem their shares (though probably few will, given the current share price of $12+), but they’re limiting Skillz insider sales to make sure they end up with at least $250 million. The pro forma valuation they cite for the combined company is $3.5 billion, with a business that expects to generate $555 million in revenue in 2022, so that looks pretty rational on the face of it — that’s just a little more than 6X anticipated 2022 revenue.

The fact that they didn’t mention 2020 revenue means I bet that number is a LOT smaller, so I did go into the SEC filings to see what they’re not highlighting (if you only see what management wants to include in a press release, of course, every company looks good). Their S-4 filed in early September is the most recent document I saw, in case you want to check into it for yourself (you should, if you’re thinking about risking actual money on this deal)… the basic financial metrics, though, are pretty interesting, if only because of the growth rate. Here’s how that looks in the filing: 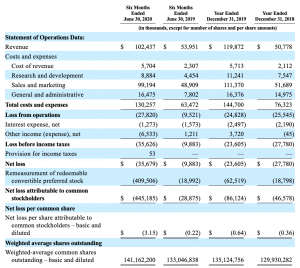