Extreme Fortunes ad from Paul Mampilly hints: "I anticipate this unique company could soon see a surge more than a 15-fold surge in the months ahead — all by gaining a new, powerful foothold in the Internet of Things revolution." What's the stock?

We tend to get a lot of questions when there’s a new Paul Mampilly ad pounding the pavement, presumably because Banyan Hill tries so hard to reach pretty much everyone who has a pulse and an email address (with the latter being far more important than the former), so we’ll jump in on this Monday morning and check out the latest pitch for his Extreme Fortunes newsletter (which at $2,995/yr is both expensive and high-risk, since no refunds are offered either on the initial payment or on the auto-renewals).

It’s a blessedly short tease, particularly if you don’t then go on to listen to the “wealth summit” presentation that tries to seal the deal… these are the clues we get from the email ad:

“I’m outlining my research on a unique opportunity I’ve spotted in the tech markets — one I’ve been waiting to enter for almost a year.

“And now, the perfect buy situation is here.

“I anticipate this unique company could soon see a surge more than a 15-fold surge in the months ahead — all by gaining a new, powerful foothold in the Internet of Things revolution.” 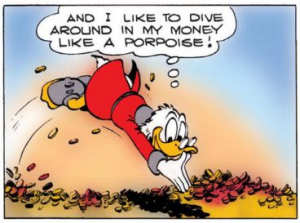 OK, so a 15-fold surge is, of course, ridiculous… particularly when attached to the term “months.” Yes, the lawyers let you get away with it because “months” doesn’t really mean anything, he could be thinking of 120 months… but the implication, of course, is that you’ll be diving into Scrooge McDuck’s Money Bin by the time the leaf peepers bring their traffic jams back to us in New England.

So before you think about this secret company, get that 1,500% return in “months” out of your head.

OK, ready to think rationally? Let’s check the other clues… we hear about a few of their customers:

“By leveraging its business intelligence software, this firm grew across the board into the servers of DHL, T-Mobile, eBay, National Geographic, Traeger and countless others.”

And get some metrics:

“The company’s revenue has grown 30% year over year … and is expected to jump 188% within the next two years.”

What other clues? We’re told that they’re “based out of Utah&#82