What's Extreme Value's editor pitching as "My No. 1 Stock Pick of All Time?"

This is not a new idea, and in fact we’ve looked at it pretty recently as it’s been pitched by other pundits, too… but Dan Ferris is out with a new promo for his Extreme Value newsletter that re-touts the idea he’s often touted as his #1 favorite investment for a few years now, and the tide of questions from Gumshoe readers is rising, so we’ll at least get those “what is it” questions answered for you today.

The lead is compelling, as always…

“Stansberry’s most secretive analyst comes forward – says he believes ONE stock could beat everything he’s recommended in 20 years… and has the chance to soar 1,000%, beginning immediately.”

And Ferris notes that this is indeed an older idea, and that he’s boldly releasing his “rare interview footage” from 2019…

“I’ve never – ever – felt so strongly about getting one single idea out to the public.

“Then 2020 came along. Everything changed. The video got put on the back burner.

“And for nearly two years now, this rare interview footage has essentially sat in a vault.

“I practically demanded that my publisher finally release the tape, right now.”

So that’s a fun narrative to put behind this promo, but we should note that Stansberry has ginned up subscribers for Extreme Value using pretty much this same teaser ad all along, we’ve seen it resurface every few months since he first released a precursor of this ad in February of 2018.

Doesn’t make it a bad idea, of course, Ferris is a value-focused guy, and like all such investors he tends to be patient and stubborn. Sometimes it takes years for your investment thesis to play out.

And he loads up the expectations for this one now…

“this new recommendation could be better than anything I’ve shared in my career.

“I stake my reputation on it.

“It’s my No. 1 recommendation.

“It’s the No. 1 stock recommendation in my 20-year career.

And it’s not a short-term play, though, of course, he does say that “upside could arrive very quickly” — a teaser ad has to have some urgency in it, of course, otherwise you’re not going to pull out your credit card (they’re selling Extreme Value right now for $1,500 for the first two years, no refunds). More from Ferris…

“My best suggestion is that you buy this stock and essentially forget about it.

“Because to me, this is the ‘holy grail’…

“I believe this has 1,000% long-term potential – in a low-risk, low-volatility stock that could soar in a ‘Melt Up’… and potentially do even better when stocks inevitably break down.

“I consider this stock a ‘one-and-done’ way to make sure you don’t miss out on the upside of gold or cryptos over the coming years.”

So what is this stock that’s teased as a gold royalty play, you ask? Yes, of course we know what it is, we’ve covered the earlier versions of this ad several times… but one more bit of tantalizing for you first…

“It’s a ‘hidden’ opportunity. The market doesn’t yet realize this is a royalty business – which is the only reason it’s possible to buy it so cheaply today.

“I seriously doubt that situation will last.

“It’s the kind of thing you’re lucky to see once or twice in a lifetime….

“I call it ‘the Best Gold Business on Earth.’

“And I believe buying it today could be a lot like getting in on the world’s best royalty companies at the very beginning of their astronomical runs.

“But in this case, it’s not a conventional royalty collector…

“It’s even better than that.

“And it’s not a miner… explorer… producer… or any other type of business you’ve likely heard of, either.

“Those kinds of businesses are extremely risky. Even in a raging gold bull market they go bankrupt all the time, for many different reasons.”

So what’s being teased here? This is once again, of course, the Canadian asset manager Sprott (SII), which is primarily focused on managing investor funds that are exposed to precious metals and other natural resources. Their biggest businesses are ETFs and mutual funds, primarily those that own physical precious metals but also a few that focus on owning miners, and what Ferris refers to as a “royalty” is the management fees they earn from those funds (and from their other asset management work, including hedge funds/partnerships that invest in junior resource companies).

And I covered Sprott again just a few weeks ago, when Eric Fry was touting the stock, so you can check out that article if you want to dig into the details, including a bunch of charts I pulled up to track assets under management, but this is a little excerpt:

The last time I wrote about Sprott was back when it was applying for that NYSE listing last Summer and Ferris pitched it again. So what’s the best way to think about this one?

I think of Sprott as essentially a levered play on gold (and to a lesser extent, silver). That means it’s primarily in competition with other levered plays on precious metals, primarily the mining stocks and royalty companies. It’s not as operationally risk as those firms, since the majority of their assets under management are in ETFs that primarily just hold physical metals… but nor is it as levered on the upside unless they’re able to attract a lot of new dollars into their ETFs when prices rise. Which maybe they can, but that isn’t at all a certainty.

The New York listing could certainly help in the long run, particularly if we see an extended bull market for gold and silver — Toronto is the center of natural resources investing, and Sprott is a much stronger brand name north of the border, but there’s so much money sloshing around on the NYSE that almost any decent company that gets listed in the US and can get “discovered” with any kind of story that appeals to investors (and “leverage to gold or silver” counts as a story) can certainly get a lift from being included in that much larger market — especially if they’re a fairly unique story.

Sprott is the only real “pure play” asset manager in precious metals, so there’s certainly some chance the stock could take off if people are excited about gold — I imagine there’s a limit to that, but I don’t know what the limit is.

The optimistic case is that a NY listing lets Sprott also raise more capital at a higher valuation, and invest more heavily in the business to acquire more assets, and that creates a flywheel of returns because of the inherent efficiencies of scale that an asset management company enjoys as it grows (the same team can manage $500 million or $5 billion without a big difference in costs, especially if it’s mostly just in bullion). That’s certainly possible, though I don’t know what their plans are — if gold is on a strong rise for a few years that would provide a nice tailwind, and if gold falls again it’s possible that they’ll be able to acquire more assets, like the Tocqueville mutual fund they bought a couple years ago, at relatively appealing prices.

And in the short term, if silver really takes off because of this newfound Reddit-linked enthusiasm or for whatever other reason, the hope is that they’ll be able to boost their assets under management further as they can argue that buying their ETFs is more efficient than buying coins (which are temporarily at a stiff premium and in relatively short supply).

The pessimistic case is that they’re competing against much larger organizations for investor and institutional funds, and they might lose that competition. Particularly in the ETF world, they have had trouble attracting new funds to their mining ETFs or their precious metals ETFs, despite the “twist” they put on the metals ETFs (that they are redeemable for gold for some large investors, which lets them argue that they are not “paper gold” like the much larger ETFs). I don’t know if that’s just a brand and marketing edge that the bigger ETF managers have, or if folks are rationally choosing the lower-fee ETFs over Sprott’s offerings.

And in case you’re curious about how the stock is doing now, here’s the chart for Sprott (in blue) measured against some other gold-related leaders — the Gold Miners ETF (GDX, orange), royalties standard-bearer Franco-Nevada (FNV, red) and gold itself (SPDR Gold Shares GLD, in green). 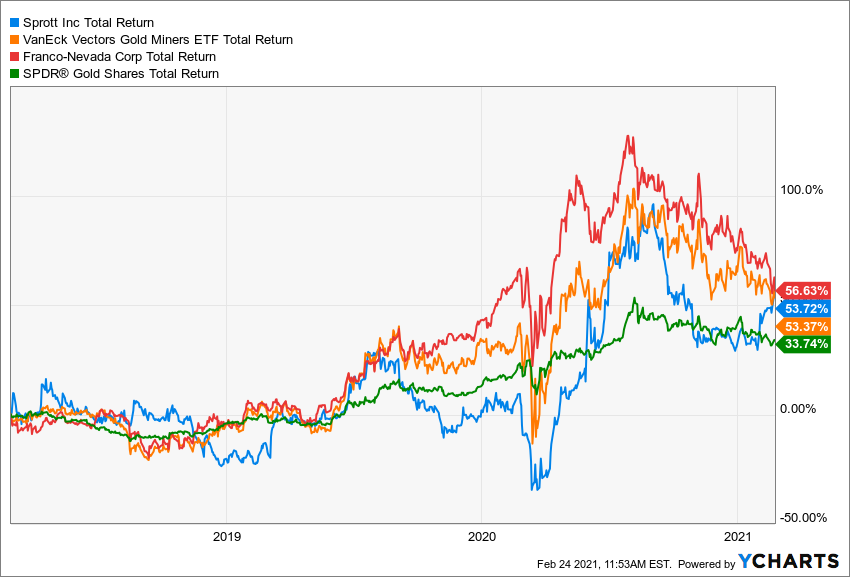 The leverage is still there to both bull and bear moves in gold, for sure… whether it compounds into something greater in the future as Ferris predicts, or gets beaten or disrupted by other asset managers, I don’t know. I don’t currently own Sprott, but will reiterate that it’s not a crazy idea… I don’t consider it to be dramatically more special than other leveraged gold (and silver) investments, but Ferris clearly does, and maybe he’ll be right. And it does pay a decent dividend while you want to see how it goes (about 3% right now), though the story could also change a bit this week because they’ll report their 2020 annual results on Friday morning.

And yes, I should note, they do also have a little crypto exposure, which Ferris has also touted over the years as a hidden asset. That’s primarily through their effort to “tokenize” gold through several venture-level investments… my expectation is that those won’t go anywhere, a crypto version of gold doesn’t seem to be something the world is clamoring for just yet, but one never knows — they haven’t spent all that much on those Digital Gold strategies to this point, so it’s true that it remains a “potential upside, low downside” part of the business.

So as always it’s your money, your call — if you’ve got thoughts on Sprott, feel free to toss ’em on the pile with a comment below.

P.S. We haven’t heard much from Extreme Value subscribers in recent years, so if you’ve ever subscribed to Extreme Value please click here to share your experience with your fellow investors. Thanks!