“Pandemic or not, the trash trucks will keep coming”

What's hinted at as the latest Extreme Value recommendation?

A quickie for you here today, since several Stansberry subscribers have sent me questions about it recently…

It’s not a hard-push of an ad, I haven’t seen it come directly to my inbox, but apparently it has been distributed to Stansberry Digest subscribers — the tease is that Dan Ferris and Mike Barrett wrote about the trash and e-recycling industry in their June issue of Extreme Value, and you should subscribe to learn about the recommended stock.

Here’s how the pitch opens…

“Pandemic or not, the trash trucks will keep coming….

“… they recommended that subscribers buy shares of a garbage-industry leader that they call ‘one of the greatest businesses of all-time.’

“This company maintains a spectacular balance sheet, including gobs of free cash flow (“FCF”)… an unmatched network of assets and competitive advantages… and a business model that allows it to consistently raise prices enough to offset all or most of its cost inflation.”

They describe this as a capital-efficient company that’s primed to survive any market conditions, partly by having the flexibility to make acquisitions during tough times. And that’s what narrows down the clues for us…

“… the company that Dan and Mike recommended has an imminent acquisition lined up that’s expected to add a $1.6 billion revenue stream through recycling – e-waste included.”

Finally, we’re told that the stock is up about 3% since it was recommended last month — and we know that Extreme Value comes out on the second Friday of every month, so the recommendation was probably priced on June 12th.

So what’s the “secret” stock here? Given those clues, it must be the big daddy of the trash business, Waste Management (WM).

Which is up about 3% since June 12… and which is indeed a great business… as a friend in the garbage business used to tell me, “Trash is cash, and business is picking up!”

Though it’s not actually picking up just at the moment, of course — trash collection is down because of the lack of office and commercial trash generation in the coronavirus shutdown. I know that we certainly have an excess of trash and recycling coming out of our house since we’re cooking at home more and getting more and more Amazon packages delivered, and I assume most households are seeing a similar shift, but that doesn’t make up for all those empty dumpsters at restaurants and office buildings.

Still, I’m pretty confident that the world will be back to throwing away and recycling more junk than ever in the future… whether that’s next quarter or in a year or two… so it stands to reason that the business should remain fairly steady over the long term.

And what’s that acquisition hinted at? Waste Management made a deal to buy Advanced Disposal Services (ADSW) over a year ago for $33.15 per share in cash, but now, after some back-and-forth with antitrust regulators and a renegotiation, the June 2020 update is that the deal will be done for $30.30 in cash, with a third party (GFL Environmental (GFL)) stepping in to buy some of the assets that the Department of Justice said had to be divested in order for the deal to go through.

And yes, ADSW reported about $1.6 billion in revenue over the past year… so that’s where that clue comes from. That should, depending on which businesses are divested, increase the potential revenue for WM by close to 10% (WM had $15.5 billion in revenue over the past year). And since debt is pretty cheap right now, and they’re doing this deal for cash (not creating more shares), it should be accretive to WM shareholders — this should increase revenue per share to a meaningful degree.

This is not an exciting or high-growth business, to be sure, and the part that is growing fastest — recycling — is also generally the least profitable, since there really isn’t anywhere for a lot of that surplus cardboard and aluminum to go these days unless you pay someone to take it off your hands.

And this will probably be the worst year for WM revenue growth in a long time, given the COVID-19 closures that are impacting almost the whole country, all at once… they saw their April business drop by 15-20% at the worst for the commercial side of the business, even though the smaller residential collection business did rise (and, as was reported in the Wall Street Journal, Waste Management is pushing to charge municipalities more for residential service as the volume climbs)… but once things begin to recover, trash collection should return to being that almost annuity-like revenue stream for the largest US trash collection and landfill network owner, growing at roughly the same pace as GDP. This is Waste Management’s annual revenue growth charted next to GDP growth for the past decade… 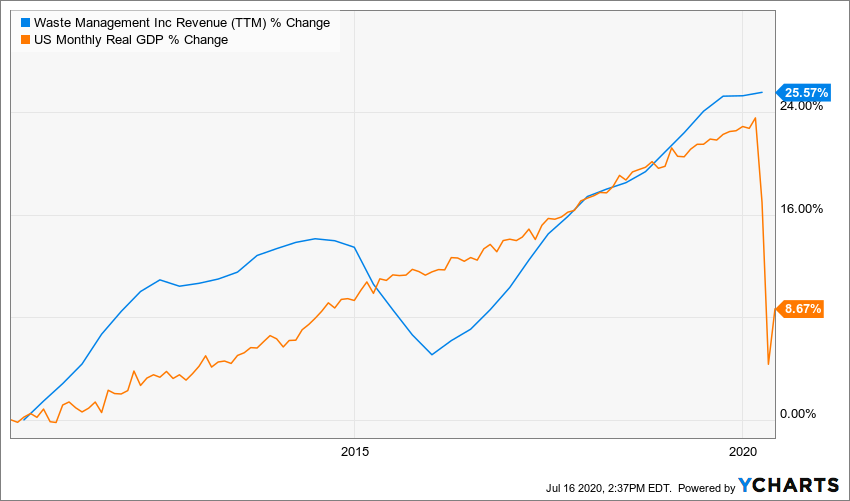 And here’s that same chart with the total return for WM shareholders added (share price return plus dividends) — so you can see that they’ve done a remarkable job of building an ever-more profitable and efficient company despite the fact that their top line grows just about at the same rate as the overall economy. 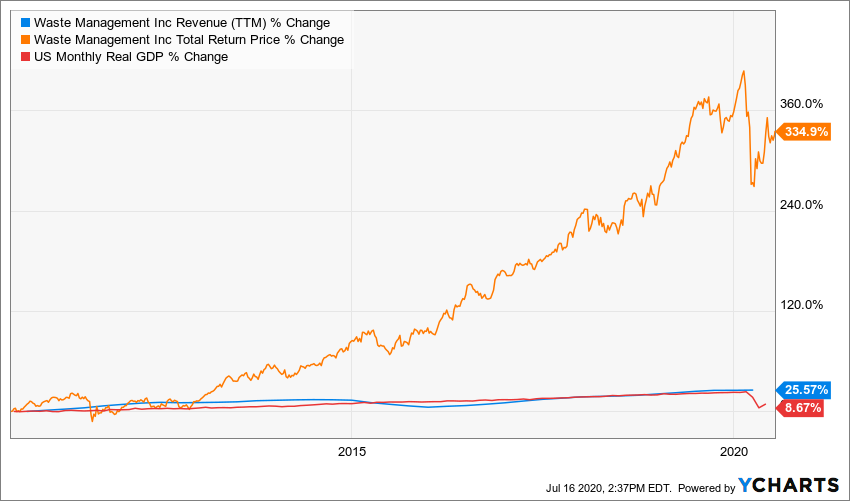 Waste Management is indeed quite capital efficient — it’s a capital-intensive business, since they rely on rapidly depreciating fleets of trucks and on huge landfill properties, so they aren’t as efficient as some other Stansberry-promoted ideas we’ve noted in the past that rely on brand names (like Hershey), but a dense collection network, restrictions on permitting for landfills and new collectors, and a dominant market position, with some regional near-monopolies, can be just as valuable as a strong brand even if the margins don’t often look as impressive. And as we’ve seen from this latest acquisition, they can keep growing — there are still lots of very small trash haulers in the US, and Waste Management, though it’s the biggest national player, has only about a 20% market share.

And while their near-monopoly positioning allows them to keep prices climbing, it’s also true that those capital-intensive assets often last a lot longer in real life than the depreciation schedules expect, which helps to fuel some really strong cash flow. Free cash flow per share has grown 73% over the past decade, and that has fueled both a steadily rising dividend (which has been increased every year for 17 years, including this year) and a steady buyback program (they’ve paused the buyback program, but have bought bask 12% of the company over the past decade… which improves per-share fundamentals).

So sure, trash is cash… I wouldn’t try to talk you out of buying Waste Management shares. It’s a very strong company, essentially like a utility, with good economies of scale and a defensible “moat” around the business.

It’s not particularly cheap, particularly given that this year’s numbers will likely be pretty bad and the shares will fall with the market if we have another crash (though they’ll probably fall more slowly), but right now it’s trading at probably about 25X next year’s expected earnings, with earnings likely to increase steadily over time. As long as business collections rebound by this time next year, the business should be a steady performer and arguably deserves a fairly rich valuation.

It’s also not drool-worthy income stock, given the 2% yield and the slow pace of dividend growth, but there’s a lot of that going around — these kinds of blue chip companies have been relentlessly bid up in price over the past decade. WM got up to a 4% dividend yield during the 2009 recession, for example, and has often traded at a PE in the 14-18 range… but, well, not many other “blue chip” industrial companies or utilities trade at low PEs these days, either, low interest rates make us chase quality and chase dividends. It’s a little tempting to wait for a real washout in the market to buy these kinds of companies at better prices, but there’s no guarantee that those better prices will come our way anytime soon. And if business bounces back relatively quickly, with the added bonus of that acquisition (which is being made for cash, so it will not dilute shareholders directly), it could be that WM surprises with a faster-than-expected rebound in revenue in the next few quarters, which would probably keep the shares moving up.

That’s just what I think, though, and I don’t own any stocks in the trash business at the moment. It’s your money, so it’s your call — what do you see ahead for Waste Management? Prefer smaller players like second-largest waste hauler Republic Services (RSG), which trades at a similar valuation, or faster-growing Waste Connections (WCN)? Maybe beaten-down waste burner Covanta (CVA) or small growth darling Casella Waste Systems (CWST)? Let us know with a comment below.