Ray Blanco says the "secret code" on a pill bottle could be worth $539,325... huh? Let's see what he's actually talking about in his FDA Trader teaser ad.

Ray Blanco seems to love pitching a good “results coming soon” story for his FDA Trader ($1,495, no refunds) newsletter over at Agora, and this one is no different from dozens of others he has touted in the past… though the stock is one I haven’t seen him tease before.

OK, fine, yes, I know what the stock is and this one was a pretty quick solution — which is why I’m getting it out to you so early in the day… but still, let’s go through the story and give you a taste of the ad, then I’ll share that answer with you.

Here’s what caught my eye:

“The drug-maker will print a secret code on the pill bottle.

“BUT YOU MUST TAKE ACTION BEFORE SEPTEMBER 28.”

That’s hooey. The code part, at least — Blanco spends a while talking up these “secret” codes on pill bottles that can help you find riches, and that’s a complete red herring… yes, every pill bottle has a number on it, and each drug has a unique code, but it’s not at all secret — it’s just a number that’s organized by the FDA and used for reporting and identification… think of it like the barcode number on any other product. It shouldn’t mean anything to investors, other than to reiterate that yes, a drug that is available commercially will have a code (called a National Drug Code, NDC). You can search the NDC directory here if you’re curious, but I’ll warn you — for most of us, it’s boring and meaningless.

And how about the “September 28” bit? That’s a reference to when he thinks there will be some sort of data release that should have an impact on the stock price. Here’s more:

“On that day, heart disease — the No. 1 killer in the world — could fade to black.

“As you read this…

“Some very sick patients — 800 of them — are participating in a clinical trial.

“The trial is a final hurdle, if you will — and it’s wrapping up any minute.

“Upon favorable results, the ‘Golden Pill’ will hit every pharmacy shelf in America, and likely become the nation’s latest blockbuster drug — a la Lipitor and Plavix.”

Blanco says this is “the most important medical trial in human history” because it’s the first one to block the root cause of heart disease… and because it’s owned by a “junior biotech” and could soar to join the ranks of Pfizer, et al on the strength of this drug, which “blocks cholesterol at the very source of it — during the liver’s biosynthesis process.”

What kind of gains? I thought you’d never ask… more from the ad:

“It took over $250 million and 20 years for the Golden Pill to sit on the brink of glory.

“Make no mistake, though — these final hours will be extremely explosive.

“That is, because the drug-maker has only one product — the Golden Pill.

“So with favorable trial results on September 28 — the stock price could blast violently vertical.

“It’s why I’m forecasting a 5,000% gain, beginning with a super-spike on Announcement Day.”

OK, so the ad goes on and on… but we already know where it’s going. And we are urged to remember that yes, a company that has only one product in development can also fall sharply when expectations about that product change.

This is, sez the Thinkolator, another pitch for Esperion Therapeutics (ESPR) and its bempedoic acid.

That drug carries high hopes as a possible next big anti-cholesterol drug that can dramatically lower LDL-C levels in the blood and, they hope reduce risks of cardiovascular disease. And better yet, it might be much cheaper than the PSK9 drugs and more effective than the statins… so the efficacy and safety are being watched closely, as with any drug where the potential exists that it could be very widely used… and the Phase III trials have brought a lot of volatility to Esperion’s stock price over the past year or so, as did earlier trials back in 2015: 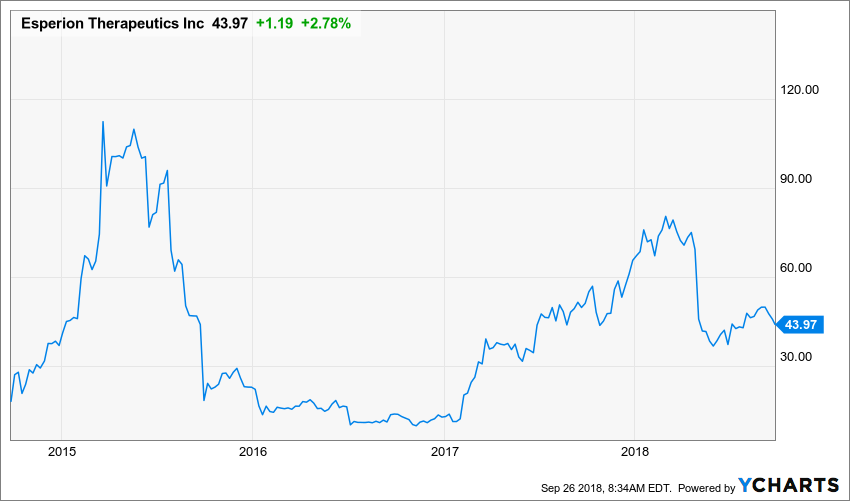 Just this year, an earlier readout from one of the Phase III trials had a higher mortality rate than expected, and investors freaked out and sold the stock down by 40% or so… then another study reported more encouraging results and the shares recovered to $50 or so last month, and, yes, there is another Phase III trial that is expected to generate some published results by October… so September 28 would indeed be the last day to buy if you want to have the best chance of owning shares before that data comes out (not that they’ve promised a particular day, but October starts on Monday).

So the biggest study they’ve reported on yet scared people, but the most recent report was at least relatively encouraging… and it seems, from number of patients, at least, that this October data release will be the next big one. They are already planning to file their NDA for approval in the first quarter of next year, so it seems fairly likely that the drug will move ahead with an application for approval, and the company says confidently that they expect to be selling the drug commercially by 2020, but the results of these trials will obviously help to inform the FDA’s decision… and, perhaps more importantly, will help investors to begin thinking about whether this is going to be a small-time drug just for very-high-risk people with wildly out of control cholesterol, or will be a widely prescribed multibillion-dollar bonanza like the statins.

In case it’s not obvious from my previous comments on biotech stocks, I have no idea which way it will go. But that’s the “Golden Pill” being touted, and there is a catalyst coming soon — you can see the basic rundown in their most recent news release with those positive top line results here, and their more comprehensive Investor Day Presentation from July here.

This is a stock I know a fair number of readers have been following, partly because our former biotech columnist Dr. KSS was a big fan (I don’t know whether he still likes it), and partly because other pundits have also been touting it — including Dave Lashmet back in July in a Stansberry Venture ad we covered here that similarly referred to it as “the most valuable drug in development, anywhere.” The potential market is certainly big, the story is compelling, and we’ll know more next week… if you’ve been following the Esperion story and have an opinion to share, I’m sure we’d all love to hear it — just use the happy little comment box below.

P.S. We’re constantly collecting reader opinions about the newsletters they’ve subscribed to, so we can all make more informed decisions — if you’ve ever tried out Blanco’s FDA Trader, please click here to share your experience with your fellow investors. Thanks!

I don’t attention to Ray Blanco. I don’t trust him at all.

Agree, as soon as I see the names Ray Blanco, James Altucher, Tim Sykes, anywhere on the message, I delete it.

Too risky for me. Too many deaths in trials. Probably not caused by the drug, as some of the patients were very sick. Won’t matter, any more deaths stock will tank.

#Esperion (#ESPR) It seems to me that most people on anti-chlolesteral drugs are fairly healthy. Why would Esperion allow trial candidates to participate if they have some other underlying condition that could compromise the trial results?

I suspect they did that because it’s easier and cheaper to get approval for conditions where current therapies haven’t worked and the situation is more dire. If you go in looking for approval in a much larger disease that affects more people, where your drug is not as necessary or the weight of side effects could be more daunting, the standard for efficacy is higher (because there are already approved treatments that work pretty well) and the standard for safety is much higher.