Skousen’s “Under a Buck” Potential 10-bagger in Gold

What's the penny stock hinted at in Forecasts & Strategies teasers?

A quickie for you to start out this week, since gold is on the lips of many investors and I got a question about this Mark Skousen teaser.

The little excerpts of the clues I got indicated that this wasn’t a heavily distributed teaser ad, it was an “upgrade” pitch to get the subscribers of his basic service, Forecasts & Strategies, to sign up for his special FreedomFest events this Summer.

“I have come across a potential ‘ten bagger’ in the mining business, and it’s selling for under a buck!

“It is literally a penny stock that trades on the over-the-counter market, but with gold in a major upward trend, it could be selling for dollars very quickly.”

So I can see why that got reader questions flowing quickly — that pretty perfectly describes most folks’ thinking about little mining stocks… wouldn’t it be fun to buy something for a few cents that turns into a fortune?

What hints does he drop to entice us?

“It is selling for pennies because the mining company will be producing gold starting in 2021. Fortunately, they already know how much gold there is (6.6 million ounces, which could make it the sixth-largest gold mine in the United States). This is not an exploratory mine, but a mine in the development stage.”

OK, that narrows it down quite a bit — though maybe don’t hold your breath about that “producing gold in 2021” bit, mining company forecasts tend to be almost criminally optimistic on that front. Any other clues to drop into the Thinkolator?

“It owns a world-class, multi-million ounce, low cost, open-pit mine in a historic district that has been held back from development because of environmental issues. That is all about to change. The feasibility studies have been made, the permitting is moving forward and production is expected to start late next year.”

OK, so if they’re still in permitting then maybe construction could start next year… that’s different from starting production. It often takes well over a year to build a mine, often longer than that before it can produce its first gold.

What else? It’s in the western US, Franco-Nevada and Barrick Gold are somewhow involved, and we get one more clue about a backer:

“… recently a billionaire hedge fund investor was invited to check out the property and bought an entire new funding valued at over $30 million.”

So this, sez the Thinkolator, is Midas Gold (MAX.TO in Canada, MDRPF OTC in the US), which we’ve certainly seen teased before… though not by Skousen. I first saw it teased about five years ago by Chuck de Castro, when it was a smaller discovery, and more recently it has been actively touted by Nick Hodge a bunch of times since early 2018.

Here’s part of what I wrote following that first Nick Hodge tease in January of 2018 (the price was about the same then as it is now, though there have been more financings so the market cap has grown)…

“They do have a prefeasibility study (PFS), so that’s the easiest data on which to base your assessments of the value of the project — the 2014 PFS included a NPV at a 5% discount rate of US$832 million, or about $2.60/share… which sounds pretty good compared to the $0.70 share price. So why is the stock trading at such a steep discount to that “net present value?”

“I don’t really know… this is a prospective mine developer, so the possible issues are legion. The regulatory prospects are presented as very optimistic by the company, but perhaps investors are more skeptical on that front…. the net present value figure is calculated on a pretty low discount rate for a relatively risky enterprise (though that’s not unusual)… the estimates were made at a time when silver prices were much higher, so lower silver is likely to drive that down a little bit (though gold is by far the most important driver)… the economics of the mine got less attractive in the years between the preliminary economic analysis in 2012 and the prefeasibility study in 2014, and investors hate to see things moving in reverse… the site is relatively complicated and expensive to build, mostly because it’s three separate open pit mines. You name it, none of those things are obviously insurmountable problems, but you don’t have to dig very deep to find possible problems and risks in a mining company.”

John Paulson, whose hedge fund has been a major backer of Midas since 2016, did indeed back a substantial new financing over C$30 million just a couple months ago, though that doesn’t show up in the market cap yet — most of that financing is in convertible notes that will kick in from 2023-2027. Those notes pay less than 1% a year so this isn’t really a typical debt financing, to me it looks more like a way for Midas to hide this equity investment on the balance sheet instead of having it show up in the share count and look dilutive (and Paulson and other major backers to get control if the company goes bankrupt). Paulson also has a couple board members on Midas now, including the Chair, and has contributed much of the capital the company has historically raised (more than C$60 million over the past five years), so Paulson & Co effectively controls about 43% of the shares once all that debt is fully converted. Franco-Nevada (FNV) has a small shareholding and a 1.7% NSR royalty on the project, and Barrick Gold (GOLD) is a substantial shareholder as well, they bought 20% of the project at C$1.06 per share back in 2018 and did a follow-on investment in 2019 to maintain their share (though it will drop to about 11% once Paulson converts his debt, assuming the company doesn’t raise any more money before then).

And strangely enough, it doesn’t look like Midas ever released that final feasibility study we were all expecting in 2018 — they now say it’s being held out so they can incorporate the decisions/alternatives provided in the draft version of the Environmental Impact Statement, which was supposed to come out early this year but is now delayed until the third quarter (partly because of COVID-19, though this kind of thing seems to always be delayed). So permitting is underway, though the first stage of US Forest Service approval now won’t come until well into 2021 (at best) and there is additional permitting that can’t begin until that is finalized (back in December they were expecting the final word from USFS in Q1 2021, now they just say “in 2021”).

So Midas will definitely will not be under construction in 2021 at this point, though if permitting and financing goes swimmingly they might start soon after that, and according to their most recent presentations (from about two weeks ago), they should have their feasibility study not long after the draft EIS is released, so probably right around the end of the year, then final permitting to be done by the end of 2021, and — assuming they can quickly get financing based on the specifics of the feasibility study — they could begin restoring the environmentally damaged area of past mining and begin to build their modern mining operation, which they anticipate taking about three years. So maybe first gold pour could be 2025 if everything goes really, really well during the next two years and they get a fast jump on building the project.

The 2014 estimates we’re still stuck with do continue to indicate that it’s an impressive-sounding project, and the updated 2018 resource statement increased teh estimates for the contained gold in their three potential mines on the site (plus the historic tailings), so there is a lot of gold likely in them thar hills, though the 6.6 million ounces isn’t “reserves” — the “probable reserves” number comes in at 4.6 million ounces, the rest are the measured, indicated and inferred resources that they’ll probably continue to firm up with additional drilling (and there is very likely more gold to be found as well, they do keep hitting exploration targets surrounding those established deposits). So it could be big, and if we go by the 2014 PFS estimates they think that at $1,650/ounce gold the project has a $1.4 billion net present value at a 5% discount rate.

So this all sounds quite good, but a lot of mines sound good in a PowerPoint presentation. I expect the shares are weak this year largely because there have been delays all along the way that tend to shake investor confidence, and because we still don’t have a feasibility study to give any hard numbers for the cost of building and operating this mine given all the changes that have come in the past six years (gold prices, changes to the environmental plan, different deposits extended, cost of mining, etc.) … I don’t know if there are serious issues that would prevent the mine from being built, or change the appeal since the 2014 estimates were published, but it certainly hasn’t been a fast planning or permitting process and sometimes the words “patience” and “junior mining investor” don’t go very well together (perhaps because these companies burn so much money in drilling and exploring and permitting that they have to consistently raise money at the worst times just to keep the machine rolling).

So there should be news coming at some point, but meaningful news will not come until the third quarter… and since this is a mining company, I’d assume that “third quarter” means “late October” rather than “July 1.” They should have enough cash to get through to at least early 2021 without raising more money, thanks to the latest Paulson raising… and gold interest is high so if they get good news or some more rabid promotion one never knows what might happen to the shares (the lsat time they really soared was during the last rapid gold spike, in the first half of 2016), but that doesn’t mean it will automatically ride the gold price for the next few months — here’s what Midas shares have done over the past three years, including the last 18 months or so of gradually rising gold prices, compared to the gold price (in orange) and the average large gold miner (using the GDX ETF, in red): 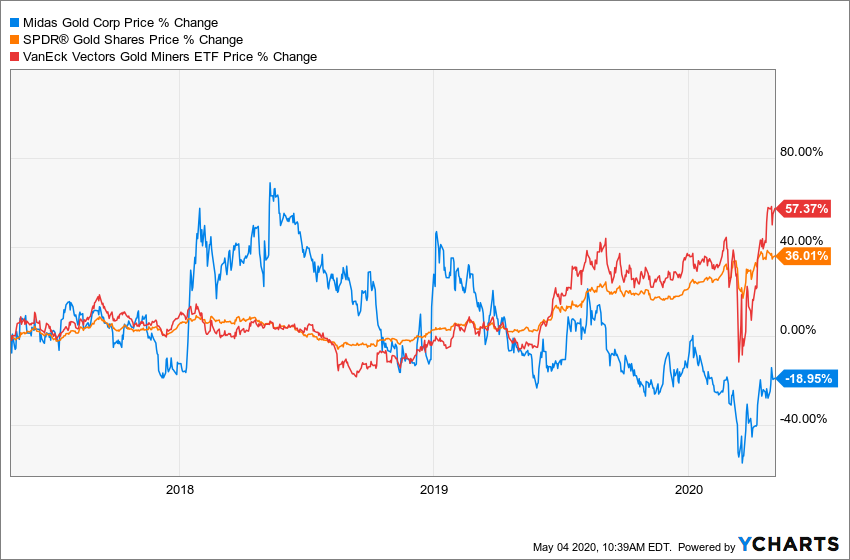 And that’s about all I’ve got for you today… a gold miner with a big potential project spread across a few deposits in Idaho, and that’s currently in the doldrums when it comes to information flow. If you’ve been following Midas in recent years or have anything to add, or, indeed, if you’ve got a different play on rising gold interest that you’d like to share with the class, by all means, use our happy little comment box below. Thanks for reading!

Disclosure: Among the companies mentioned above, I own shares of and/or call options on Barrick Gold (GOLD). I will not trade in any covered stock for at least three days, per Stock Gumshoe’s trading rules.

Travis, other than Barrick are there any gold miners you like?

I personally like and invested in B2G, WPM, SAND

I primarily invest in gold mining through the royalty companies, my largest position by far is Sandstorm Gold (SAND) and second largest is Royal Gold (RGLD).