Can you really “Buy Lyft Stock Before the $23 Billion IPO?”

What's being teased by Ian Wyatt as a back door into the year's hottest IPO (so far)?

In case you’ve been living under a rock, the hot IPO news this year is that both Lyft and Uber will be going public very soon — Lyft, in fact, should hit the public markets for the first time on Friday after setting a price for the IPO tomorrow, and their larger competitor will be watching closely, with plans to join them in listing publicly (and raising money) sometime in the next few months.

And it’s going to be a doozy, most likely, it will probably be priced in the $60s and may well soar on the first day of trading if demand is as high as the press coverage indicates.

These are huge and unprofitable companies, with arguably no rational path to profitability in the next few years other than “fix prices” or “screw over drivers,” but they are also operators of fantastic and very popular services that almost every urban American relies on to some degree, and they are the biggest “brand names” to hit the IPO market in years. And they’re big — Lyft will likely have an implied valuation of about $20-25 billion depending on pricing, Uber is hoping to go public at a valuation of over $100 billion.

And, yes, investors love IPOs. Probably more than they should, given that the real purpose of an “IPO” is usually as much “Employees and early Backers Want to Sell” as it is “We Need Capital for our Amazing Growth Plans,” but we all still remember the go-go days of the late 1990s when getting a piece of a dot-com IPO might give you 500% returns in a week, and there’s something universally appealing about being first. People still line up at the Apple store for the latest model on the day it’s released, and people still want to buy IPOs on the first day.

So it’s understandable that newsletters have often found that promising access to “Pre-IPO” shares in exchange for a subscription payment is an appealing enough offer to get possible subscribers off the fence and pulling out their credit cards. We’ve written about these a few times, so I thought I’d update my thoughts by checking out the latest teaser pitch along these lines from Ian Wyatt.

Here’s the headline from Wyatt’s “webinar” pitch, where he sells you on viewing his free live presentation… which, I am pretty sure, is going to pitch the same exact “pre-IPO” investments he has touted before.

“It’s your chance to secure shares in upcoming tech stock Initial Public Offerings – BEFORE the shares go public on the NASDAQ or New York Stock Exchange.”

So no, I confess to not having participated in the live presentation… though I have sat through a couple of his similar presentations in the past. So I’m just going to assume that he’s again pitching his Million Dollar Portfolio, as he did with similar “webinar” presentations touting ways to get in early on the Spotify IPO almost exactly a year ago.

So here’s my assessment of what his pitch probably covered…

Wyatt is almost certainly going to again be touting the major publicly-traded venture capital funds again — those are, on the exchange-traded side, GSV Capital (GSVC), which is an owner of Lyft shares, and Firsthand Technology Value Fund (SVVC), which is not… and on the mutual fund side, the SharesPost 100 Fund (PRIVX), which currently lists Lyft as its largest holding. Other likely high-profile IPOs in the near future like Pinterest and Palantir are also holdings of some of these funds, along with dozens of venture-backed companies that most of us have never heard of.

GSVC and the PRIVX fund are the most noteworthy publicly-available owners of the higher-profile companies as of now (SVVC doesn’t own Uber, Lyft, Palantir or Pinterest), though that doesn’t mean they’re going to surge higher instantly. These are diversified investment funds, and the returns are not going to be earthshaking for any of them just because of any possible “pop” in the value of Lyft (or whatever the next “hot” IPO is).

Here are the top holdings of GSVC, which currently trades at about 80% of their self-assessed net asset value: 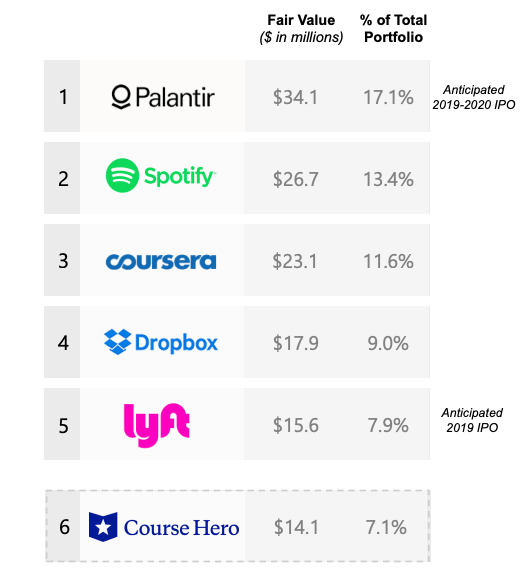 What does that mean? Well, if it’s about 8% of the NAV and the value of Lyft somehow doubles in the first weeks after going public, that would mean their stake goes from $15 million to $30 million in value. That $15 million is meaningful for a smallish company, the current net asset value for GSV Capital is $195 million (as of Dec. 31), so that would be a 7.5% boost to the fund’s book value per share. That could drive the shares up a little, assuming Lyft sees such an instant surge.

But GSVC is also a fund that trades independent of the net asset value — sometimes they’ve traded at less than half of NAV at times when no one was excited about the IPO market or their “exit” potential, so the bigger difference is in sentiment about GSVC. They went from trading at about 60% of asset value in mid-January to now trading at 80% of book value, mostly because, I assume, investors are enthusiastic about the prospects for IPOs and private market valuations improving again… and probably largely because GSVC is one of the few ways to get exposure to Lyft and Palantir and similar high-profile names.

Should you want to get exposure to those names? Well, that’s a different question. The same thing has happened with GSVC and SVVC in the past with the Facebook IPO, then the Twitter IPO, and if you had bought into GSVC back in 2012 because of that enthusiasm and held onto the shares, you would have lost a lot of money buying into previous spikes in the the “price to book” valuation. Here’s the chart of GSVC since inception — price in orange (currently about $8), price/book valuation in blue (currently about 0.8). 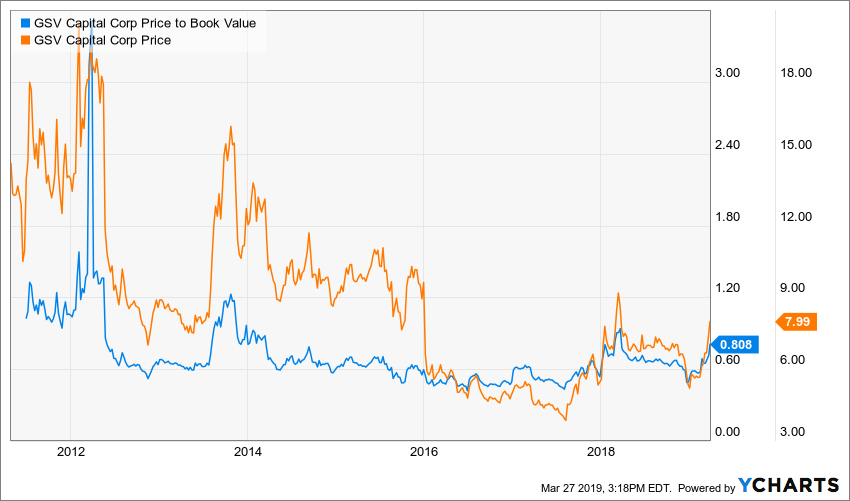 Of course, during the pre-Facebook and pre-Twitter runs in 2012 and 2013 GSVC traded OVER book value, not just at a smaller discount, so things might not be as dramatic… but they have clearly been challenged to turn a few good early investments in successful companies into shareholder returns. Here’s the total return for GSVC (they do pay dividends, so the 45% drop in price over the years isn’t a fair measure — total return includes those dividends): 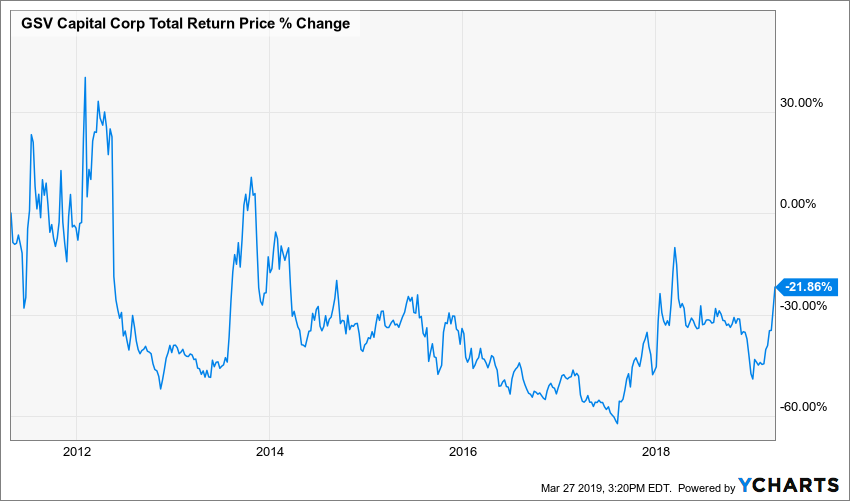 That’s not just to pick on Wyatt, who has touted this fund many times. I’ve owned GSVC in the past, tempted by huge discounts to NAV, but it didn’t particularly work out well for me, either… but looking at funds like GSVC at huge discounts before a mania emerges about some high-profile upcoming IPO works out a lot better than buying during that mania at much higher prices. If you want a lot of exposure to Lyft, just buy LYFT shares — you will likely pay a lot more than GSVC did, but you won’t also be saddled with their management costs and the 30 companies they own that you don’t care about. Or better yet, wait it out and see if Lyft shares collapse in six months once the lockup expires and insiders start selling, or whenever people move their profit lust on to Uber or the first wave of ugly news hits the shares, it’s very rare for the IPO price to be the all-time low for a stock, there are almost always opportunities to buy during periods of much lower enthusiasm.

And how about the SharesPost 100 Fund (PRIVX)? That’s structured as a mutual fund, so it offers shares and redemptions (which are limited) only at the NAV, so you can’t ever buy in at a discount (or premium), and it’s far