“Company that Doesn’t Make or Sell Anything” to “Double Your Money Year After Year?

What's the "NO JOKE!" 9,186% grower being hinted at in the ads for Intelligence Report?

“There is a company that doesn’t make or sell anything—yet, it earns over $3 billion a year.

“It occupies this futuristic-looking building (its world headquarters) in the heart of New York City.

“And it’s been turning ordinary investors into multi-millionaires.”

And, actually, that’s enough to get our solution… because, as anyone who spends any time in New York city will know, that “futuristic looking building” in Manhattan that they include a photo of in the presentation is, in fact even named after this “secret” company.

Here’s a photo of it that I pulled separately, in case you want to use that to jump to your own conclusion right away… 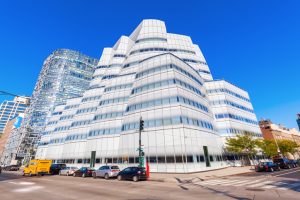 But we’re just getting started, I don’t want to spoil the surprise for those who haven’t strolled around Chelsea in the last decade, or who aren’t architecture buffs… and we want to know what makes this company such a “no joke” compelling idea for Jim Woods, who is using this idea as bait to hook new subscribers to his Intelligence Report (that’s a longstanding investment newsletter formerly edited by Richard Young, Woods took it over a couple years ago — currently charting $99/yr for the basic subscription).

What else do we hear about this investment? Here’s a taste:

“This very strange 33-year-old company doesn’t make or sell anything! Yet, year-after-year, it earns over $3 billion (over $4 billion last year)!

“Join investors who are doubling their money every year—9X-ing the S&P 500—and 3X-ing the entire tech sector!

“You owe it to yourself to check out this company and its legendary Chairman, who mastered “the art of the deal” before Trump even made his first one!”

Getting any warmer, there? You’ll almost certainly recognize the CEO’s name, but we’ll get there in a minute…

“… this company can produce profits in a very unusual way.

“Yes! Mountains of cash are pouring into this company every day thanks to a technology it did not invent, does not own, and does not pay for.

“But it’s a technology—a digital platform—that by 2025 is expected to produce $1.95 trillion a year…”

Oooh, how intriguing! Whatever could it be? Apparently it’s growing really fast, too… from the ad:

“A growth rate practically unheard of for an established blue-chip company!

“And if its share price merely matches that extraordinary 9,186% growth rate…

Thats a logical fallacy, of course — if a company is projected to grow earnings or revenue by 9,186%, then either that projection is hotly disputed or the company is going to be valued based on that revenue expectation (with some discounting for time and uncertainty) today. Stocks don’t wait to go up after a company has grown, they go up in anticipation of all of that future growth. Sometimes investors overpay or underpay for that future growth, or sometimes surprises happen, that’s what makes a market, but copywriters love to tease the idea that their projected growth in the business means the stock will rise by that same percentage amount… and that’s just misleading.

Which doesn’t mean this is a bad stock, of course, just that you should get the 9,186% growth rate out of your head before you go any further or consider investing in it — if you start with that kind of forecast, then it will be really hard to be critical or skeptical of anything to do with the stock.

What else do we learn about this “secret” stock?

“This company is Wall Street’s version of the goose that lays golden eggs.

“Publicly-traded spinoffs valued in the tens of billions of dollars—even before they were spun off!

“And you’ll automatically own shares in these billion-dollar companies…

“Provided you first own shares in this already multi-billion-dollar company.”

We get more praise of the company and its founder…

“This company has weathered every storm.

“For 33 years and counting.

“Do you know why?

“His personal net worth is over $4 billion.

“And he’s as brilliant a businessman as he is unconventional.

“He was a college dropout.

“His first job was as a mailroom clerk.

“Today, he entertains European Royalty wearing shorts and sandals—and is married to a Royal Princess….

“… in his former business, he created TV-sitcoms!

“He even created an entire TV network that challenged and outperformed the top three: ABC, NBC, CBS.”