Lynn tells me that a bunch of folks have been writing in with questions about this “5G Keystone” pitch int he past few days, so I’ll take a look. Here’s the lead-in from Dave Forest, who’s touting what he says is an 81-cent stock and pitching subscriptions to his International Speculator newsletter over at Casey Research ($1,995/yr, no refunds):

“Which means one thing:

“The supply crunch is setting up to be even bigger.

“And that’s great news for us.

“Because one 81¢ company owns one of the largest AND highest-grade neodymium deposits — in North America!

“To be exact, they hold up to 1.2 million metric tons of neodymium.”

So this is another pitch about rare earth elements, which have had a few big runs over the years — and which are the source of political fights between China, which produces almost all of these raw materials, and the rest of the industrialized world, which needs them for all kinds of high-tech gizmos, from smart phones to guided missiles. More from the ad:

“According to Global Times, one of China’s top state-run newspapers, the Chinese government is ready to halt all exports of neodymium to the U.S.

“Can you imagine what that would mean for the 5G rollout?

“I’ll tell you; it would bring America’s deployment of this breakthrough tech to a crawl.”

And the 5G connection is drawn tighter still…

“The Chinese closed off all exports of this element to Japan, Europe, and the United States.

That had nothing really to do with 4G specifically, of course, but there were sure plenty of soaring rare earths stocks back then — here are the ones he name drops and shows little charts of:

That was an exciting time, for sure, and I remember the last real rare earths mania fondly… but don’t forget how challenging it is to trade these kinds of bubble stories. You’re not going to turn $1,000 into $4.5 million, not just because you probably won’t luck into the right stock… but, more importantly, because you’re not going to buy now and hold through a 43,000% gain and then sell at the top.

Avalon Advanced Materials was a leader of that prior bubble mania and still exists, so we can look at the chart just to get a little context — yes, it was theoretically possible to buy it in 2003 or 2004 and show extraordinary gains into what we now know was the peak of that boom, in April of 2011, but would you have sold at a 1,000% gain in 2006, or after the stock later dropped by 80% or so in the 2009 crash? If so, no 10,000% return for you! (the chart shows 8,410% gains, I did not try to find the absolute bottom or top share price and buying it for nine cents would have led to a much more dramatic final return percentage than buying it for 11 cents, but that’s pretty close). 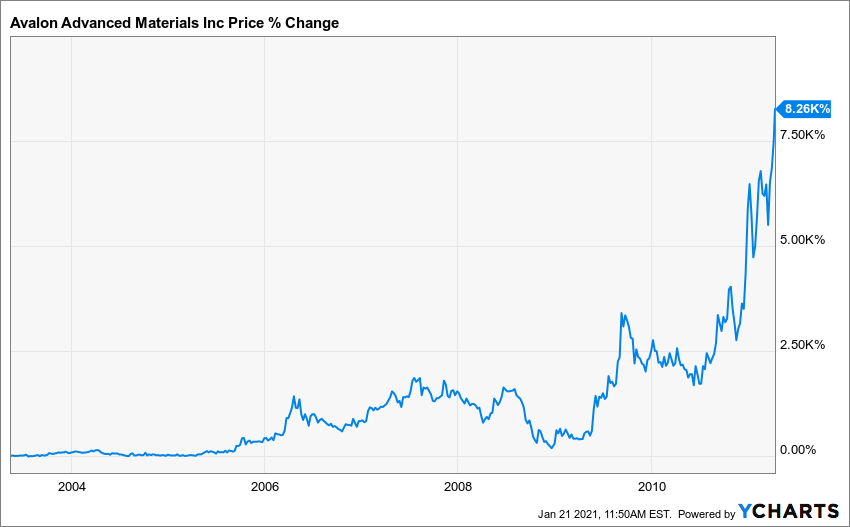 And, of course, we should remind ourselves of the old adage — nobody rings a bell at the top. If you were stubborn enough to hold on for your 10,000% gain… would you have been also stubborn enough to not sell as it collapsed from that peak? This is what that same chart looks like if we extend it out another ten years or so, to today — not a 10,000% gain, but a 40% gain (I threw the S&P 500 in there, just for some context): 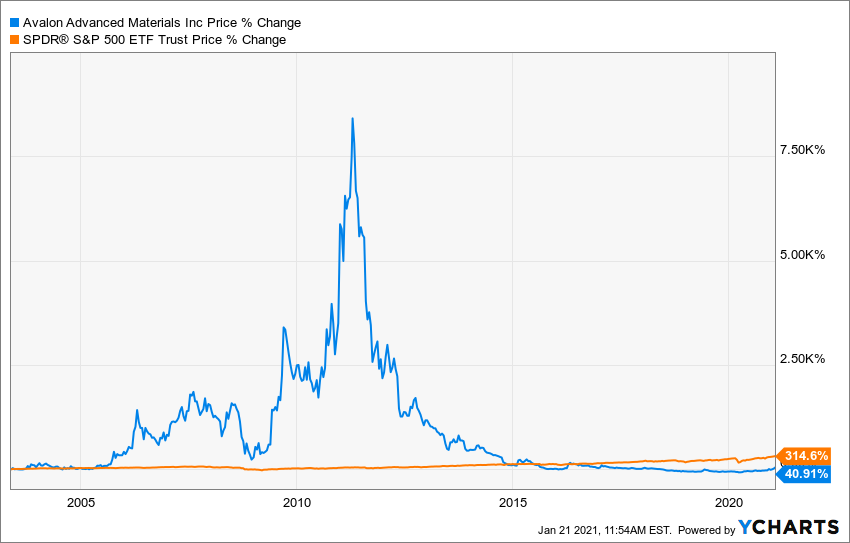 Lottery tickets are fun, but they don’t compound on themselves — you have to redeem them for cash at some point. And nobody is very good and picking which exact point.

Which doesn’t mean that we should give up on finding exciting little stocks to trade, that’s a fun thing to do with small amounts of your portfolio that you can really afford to lose, just that we should not plan on 10,000% returns, or even 1,000% returns, or, if we don’t have portfolios that can easily absorb the cost, pony up nonrefundable $1,995 subscription fees in the hunt for such elusive beasts. They will come every now and then, for the patient and the stubborn… but remember that if you spend a lot of time chasing 10,000% gains, you’ll also find that they’re always accompanied by their friends, the 80-90% losses that help to absorb some of those big wins. (I’ve got a few 1,000% return equity positions in my portfolio now, just for context, one that took 15 years to get there and a couple that took three years, and those are great portfolio builders… and we’ve even had a few 20,000% returns on wild options specula