What’s Schaefer’s “The Next Uber: The Backdoor Way to Profit from the Rideshare Revolution?”

What's being teased in the ads for Investing Whisperer?

Today I’ve got a new service to look at — it’s from Keith Schaefer, whose Oil and Gas Investments Bulletin we’ve covered a few times over the past decade or so… but this time he’s getting away from energy stocks with a service he calls Investing Whisperer (currently $999/yr for “charter members”). He has also done some “promoted” stocks where he was paid by the company in the past, but those were disclosed and this appears to be an actual recommendation he’s teasing.

The basic gist of the ad is summed up here:

“I believe there are still fortunes to be made investing in ride sharing… but anyone investing in Uber today is likely to lose money.

“If you want to make money in the technologies changing the world today, you just have to look a little bit harder…

“And thanks to the Schaefer Method, I found the tiny company that’s vacuuming up those dollars…

“Even better – its success isn’t just tied to Uber and Lyft. As basically any of the ‘gig economy’ platforms that require drivers grow – like Postmates, Amazon, TaskRabbit and GrubHub, just to name a few – this small company will profit…”

He provides some numbers for why he thinks this is an “unstoppable trend,” including this…

“Only 10 years after it began, Uber has booked 10 billion rides. And it’s on pace to book more than SIX BILLION rides a year (and growing).

“But even after that impressive growth, the company is only responsible for 1% of all miles driven globally.”

“This company is tiny (less than one-one-hundredth the size of Uber). It’s not on anyone’s radar.

“And as ride-sharing demand continues its growth, this company’s profits (and market cap) should absolutely soar.

“I call this company ‘The Next Uber.'”

So what does this company do? Apparently it is filling a need for Uber and Lyft…

“Right now, the biggest problem with Uber and Lyft’s business model is a shortage of drivers…

“Both companies admit they don’t have enough drivers in most of their markets.

“And to make things worse, around 40% of drivers that apply to drive for Uber and Lyft can’t get an approved car.

“And these platforms need more drivers, not fewer…

“But if the platforms can’t attract enough drivers, customers will go somewhere else… and the whole business falls apart.”

What does this little stock to do attract more drivers, then? Apparently they rent cars to drivers who can then use them to take Lyft or Uber calls or deliver stuff for any of the many services out there…

“When a driver rents a car through The Next Uber, they’re paying as little as $290 a week – 22% cheaper than competitors.

“In addition to costing less than competitors, drivers can also get approved much quicker when they sign up with The Next Uber – I’m talking as little as 12 hours versus two to three weeks with a company like Hertz.

“The Next Uber also allows drivers to drive on any platform… they can earn money with Uber, Lyft, Amazon, GrubHub, TaskRabbit, etc.”

And some more info about this “next Uber” …

“The Next Uber matches up drivers to either private car owners (people like you and me) or car dealerships that have idle cars with drivers that need a car.

“And it collects revenue all along the way… the company takes a fee from the vehicle owner and the vehicle renter. It also makes a profit on the insurance it provides its customers.

“It doesn’t carry any inventory of its own… so it’s ‘asset light’ and doesn’t require loads of capital to operate the business.”

That all sounds good… providing a matchmaker service for car owners and people who want to be Uber drivers. Is there any other info from Schaefer to help out the Thinkolator? We do get a bit more… 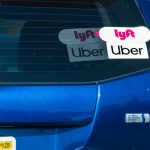 “Asset heavy guys (like Hertz) are only offering this service because Uber/Lyft are subsidizing the programs. Otherwise, they’d lose a ton of money…..

“The Next Uber is getting 25,000+ new driver leads each month. But it currently only has a couple thousand cars to rent out (remember, this company is very new).

“But this is a great problem to have…

“This tiny company has 10 times the demand for its product than it can supply.”

And a couple other clues hidden in the hype…

“In fact, adding more dealerships is The Next Uber’s No. 1 focus right now…

“And it’s working… The Next Uber already has a backlog of 200 dealerships that it’s onboarding onto the platform.

“And it has 750 more dealerships (and counting) in the pipeline….

“An executive at The New Uber, whose previous job was building the largest Ford dealership in the world, believes the company will have 10,000 cars on its platform by the end of 2019.

“And it’s only about 1,000 cars away from profitability right now… which it should hit any day now.”

Schaefer says that this is “on the cusp of positive cash flow,” which is certainly a lot more than Uber and Lyft can claim.

So why would car dealers do this? From the ad:

“The Next Uber’s service helps dealers in three, big ways…

“Each driver that rents a car from a dealer is a potential, future customer

“The extra miles drivers put on those idle cars allow dealers to earn factory rebates when they sell the cars as ‘certified pre-owned.’

“Yes, The Next Uber’s service is great for dealerships.

“But it’s also great for The Next Uber. The dealership pays The Next Uber every time a car is rented. So does the driver… “

And Keith sums up his argument:

“It checks all my boxes for The Schaefer Method…

*The company is on the cusp of profitability

*Insiders own a bunch of stock

*The company has huge scale

*It doesn’t need to raise money

*Its model is proven in all 50 states”

Other clues? We’re told that it “grew 138% last year”, and that company insiders are also loading up on stock”… and that “you can invest in this opportunity right away with any online brokerage. And you can invest as little as $20 to get started.”

Well, you can actually invest a lot less than $20 if you want… Thinkolator sez this is HyreCar (HYRE), which currently trades for about $2.30 per share. Here’s the company’s description of itself:

“HyreCar Inc. (NASDAQ: HYRE) is a nationwide leader operating a carsharing marketplace for ridesharing in all 50 States and Washington D.C. via its proprietary technology platform. The Company has established a leading presence in Mobility as a Service (MaaS) through individual vehicle owners, dealers and OEM’s, who have been disrupted by automotive asset sharing. By providing a unique opportunity through our safe, secure, and reliable marketplace, HyreCar is transforming the industry by empowering all to profit from Mobility as a Service.”

This is how they described themselves previously, they seem to have dropped the “peer to peer” language at some point in 2018 for most of their promotional materials…