What microcap stock is being hinted at by Micro Energy Trader?

This teaser solution was originally posted on October 5, 2016 — the ad has circulated very heavily at various times in the past 18 months, routinely driving a lot of questions our way, so I took another look in May of 2017 when the ad was last updated. The ad still carries the May, 2017 date, but readers are asking me about it every day so we’re taking another look.

The stock rose substantially from the Fall of 2016 into the $5 per share peak in late January of 2017, probably in large part because of the attention from the original Kent Moors ad and, to a lesser degree, from the Game-Changing Stocks pitch from StreetAuthority that also hinted at this stock as one of their ideas even before that… that’s a lot of attention for a microcap company to absorb, and it almost doesn’t matter what the fundamentals of the company are like if a few thousand new investors are getting excited about it because of a newsletter ad campaign.

A year later now, it seems Arotech is still the stock being teased, and the fundamentals don’t appear to have changed markedly to me… and the shares are again at roughly the same price as before the first version of Kent Moors’ ad caught our attention 18 months ago. They did have their best post-Moors quarter yet to end 2017, and the one analyst does forecast a profit for both this year and next (17 cents this year, matching last year’s performance and right in the middle of the company’s guidance, and 31 cents next year… though you should never bet heavily on the estimates of a single micro-cap stock analyst), but I don’t know anything about what those forecasts are based on… other than the general sense that yes, defense spending is rising.

They did announce their first quarter earnings just last night, so you can consult those numbers to see if you think the story is changing — it looks to me as though the training and simulation business is still leading the charge, and that the power systems division, which includes that still-tiny “micro grid” business that Kent Moors talks about, is getting some orders — but not exactly blowing anyone’s minds. Doesn’t mean it’s a terrible investment, or a bad company, you can make that call — it just can’t match up to the ridiculous hype in the ads for Micro Energy Trader.

I’ll leave you with this before we head into the meat of this recurring ad: If these smaller decentralized power grids are going to change the world, it’s going to happen slowly… and it’s still hard to see any reason why this particular little defense contractor should “dominate” in a very competitive business, particularly since they haven’t grown very dramatically over the past year and a half that Moors has been making almost the same promise.

Much of what follows is unchanged from 10/5/16, as the ad itself is largely unchanged, but I’ve gone through and done some light updating as necessary:

Dr. Kent Moors never goes small or understated with his investment promises… this is the intro to his latest teaser pitch for Micro Energy Trader ($3,500/year):

“I have, in my possession, a document containing shocking details about what may be the most important energy innovation of the past 100 years.

“This disruptive invention, partially funded by the military, is in the final stages of development by a small U.S. defense contractor.

“As soon as it’s released it will almost instantly disrupt nearly every aspect of a $6 trillion global energy market.”

Don’t get out your checkbook yet, though, we’re going to sniff around, use the awe-inspiring power of the Mighty, Mighty Thinkolator to figure out what company he’s talking about, and give you a chance to think for yourself a bit (and, I hope, share your thoughts with us).

After that, if you’ve got an extra $3,500 laying around and want to subscribe to his letter… be my guest — but I think you’ll have a better chance of thinking through the stock dispassionately if you don’t pay up front for the privilege (teaser stock ads like this fuel two big biases for many investors: if you pay for information, you’re more likely to believe it and act on it; and we are all more inclined to overweight the first piece of analysis we read about any investment, so I think it’s better if that first bit of info comes at no or little cost and with at least a little cynicism to balance the “buy” sentiment of these overhyped newsletter ads).

So let’s dig into it, shall we? Moors indicates that it’s a tiny defense contractor that has the potential to grow to rival giants like Boeing…

“Now look at a microcap company like the $75 million defense contractor I’m about to introduce you to.

“If, as I expect based on their incredible new development, their value jumps 38,901%…

“They’ll still only be a third of the size of Boeing today.

“And I’m confident they’ll grow to at least that size.

“Because when you find the right defense contractor at the right time, the profit potential is truly historic.

“The federal government has already vetted the company, paid for their research, tested their technology’s effectiveness…

“And they’re awarding them more contracts than ever.” 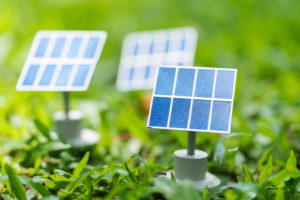 OK, having the Feds as a customer is good — particularly if the number of contracts is rising. The government, particularly the defense department, is not terribly cost-conscious… all else being equal, your profit margins are probably safer if you’re trying to sell jet fighters to the government than if you’re selling sensor chips to Apple.

Moors says that the government is looking for energy solutions for the military, and he says the promising development that cuts down on the huge demand for diesel fuel (for generators) is what he’s calling the “nano grid” — apparently, fuel is a big logistics challenge for the military as well as a real risk factor: