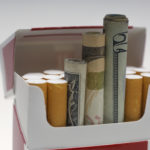 And now big are these payments? Fitz-Gerald cites several different examples of indiiduals who have been collecting big from tobacco at $3,300, $5