Fool’s “Small-cap ‘Amazon of the North'”

The ad from Hidden Gems Canada says "This Small-Cap Canadian Stock Could Be Like Buying Amazon in 1997..." What is it?

This article was originally published on October 30, 2019 when we first saw the Motley Fool “Amazon of the North” ads — it’s being teased again this week, so we’re re-posting this solution to help answer reader questions. The stock being teased has risen about 15% since we first covered the pitch, but the story has not changed in any meaningful way — what follows has not been updated or revised.

Back to the Motley Fool we go… this week it’s the Motley Fool Canada that caught my attention, hinting at a recommendation they made a few months ago but still like now for their Hidden Gems Canada service.

Here’s the lead-in for the ad, which I received just this morning… we start with the “fear of missing out” greed factor:

“When The Motley Fool first recommended Amazon to its U.S. members in 1997, it was just a small-cap stock trading for roughly $1 a share… but many investors failed to take it seriously.

And then move on to the “wait, maybe you’ve got another chance for those gains!” tease…

“Now, a Canadian small-cap stock is being called “The Amazon of the North” by some market insiders.

“Why? It just secured a $600 million investment from none other than Amazon itself.”

So what is this company? We’re told that it’s listed on the Toronto Stock Exchange, and that it “dominates 95% of the market” in Canada (for what, we don’t know). And the ad also says that it’s valued at $1.2 billion today, so it’s certainly small enough to have big long-term growth potential (though I’d say Amazon, too, has plenty of growth potential remaining, and it’s ticking along at almost a $1 trillion valuation).

Any other hints about the focus of this special report? Not really, though they do say that the report is called “”The Small-Cap Amazon of the North Has Arrived.”

And they ladle on the FOMO pretty heavy in the P.S. of the email that I got today:

OK, so, before I tell you the Thinkolator’s results I want to make one thing clear: I PROMISE that this stock will NOT be the “next Amazon.” It’s NOT going to go up 32,000% in the next 20 years. I am extremely confident in that assertion.

Which doesn’t mean it’s a bad stock, of course, just that if you start your research with that “next Amazon!” in mind, you’re not going to be careful enough or think about risk or loss potential. Let’s go in clear, shall we?

So now I can tell you: Thinkolator sez this is: Cargojet (CJT.TO in Canada, CGJTF OTC in the US), which is indeed an Amazon supplier and may receive an equity investment from Amazon.

But no, this is not some infinitely scalable breakthrough company — it’s an air leasing and air cargo company. Their primary business is operating a Canadian city-to-city air cargo transport network for rapid overnight deliveries and companies like Amazon are their customers. Here’s how they describe themselves:

If Amazon earns and exercises those warrants, they would then hold 14.9% of the company, for which they would pay about C$183 million (that’s exercising warrants on 14.9% of their current 13.5 million share count, at $91 a share). I would assume that this deal works out well for Cargojet if it inspires Amazon to use its services more actively or exclusively, which is certainly possible, and if it deters Amazon from building out its own fleet of cargo planes in Canada, but it isn’t creating brand-new business — Amazon was already Cargojet’s customer, and presumably was their largest customer.

Cargojet sees opportunities for growth in a few areas — they aren’t currently planning on significantly increasing their fleet of 22 cargo jets and three passenger jets (the passenger planes are on charter and run by a third party) in the next couple years, but they think they can use them more efficiently by adding daytime or weekend routes and increasing their trans-border shipments, particularly with the US as the new trade agreement (presuming it eventually gets ratified by Congress) increases the allowable cross-border purchasing limit for individual Canadians.

Their planes are pretty old, mostly 20-30 year old Boeing 757 and 767 freighters, and they own about half of them (the other half are leased), their pilots are in a labor agreement through 2023 so labor is pretty settled, and about 75% of their revenue each year is from long-term contracts with major customers which include surcharges for high fuel costs, so the business should be fairly predictable. Here’s how they described the business in the last earnings report: 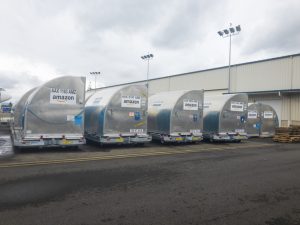 “The Company’s revenues are primarily generated from its overnight air cargo service between 14 major Canadian cities each business night. Most customers pre-purchase a guaranteed space and weight allocation on the Company’s network and a corresponding guaranteed daily revenue amount is paid to the Company for this space and weight allocation. Remaining capacity is sold on an adhoc basis to contract and non-contract customers. Although a significant portion of overnight revenues are fixed due to guaranteed customer allocations, Cargojet’s revenues will generally rise and fall with the overall level of customer volume typically expressed in pounds.

“Revenues and shipping volumes from the Company’s overnight air cargo service are seasonal. Customer demand is highest in the fourth quarter of each year due primarily to the increase in retail activity during the holiday season in December.”

I don’t think I’ve ever looked at a cargo airline before, but it’s a pretty appealing concept because of the higher returns they can earn compared to full-service shippers — since they’re mostly just operating a network of overnight routes they don’t have the last-mile costs of package delivery or sorting, and longer-term contracts mean they don’t have the daily fluctuating demand of passenger airlines (or the additional costs of customer safety and service, which is probably why they can get away with having some planes from the 1980s in the fleet).

The downside, I would imagine, is that they do carry a bit of debt since they’re effectively an airline and have to pay for those planes, and they’re probably not setting aside cash for substantial renewal of the fleet so they’ll need pretty consistent access to capital for major maintenance and, eventually, replacement planes or new planes if they want to maintain and grow their capacity.

Cargojet does pay a dividend that has been growing in recent years, currently that amounts to about a 1% dividend yield, and the valuation is awfully rich on a PE basis thanks to those heavy depreciation and amortization charges — though on an enterprise value to EBITDA valuation it’s not far from the ballpark where UPS, FedEx or US airlines frolic, with an EV/EBITDA of about 12.5 it’s at about the same valuation as FedEx, a little cheaper than UPS (13.4) and quite a bit more expensive than American Airlines (10.5), Delta (7) or Air Canada (5.2). It’s also quite a bit more expensive than the companies who really just charter cargo planes to customers (including Amazon Air), like Atlas Air Worldwide (AAWW, EV/EBITDA of 4)

You can check out Cargojet’s latest investor presentation here, there’s quite a bit to like about their flexible and entrepreneurial culture and their steadily growing revenue and cash flow. The current valuation doesn’t strike me as particularly appealing at first read-through, so I don’t see any rush here — they do have an opportunity to add more routes using their current fleet, which could help considerably with margins if there’s demand for more capacity, but I haven’t seen any specifics about how much of their current capacity is utilized (are the flights from St. John’s to Vancouver every night full? Half full? I have no idea), so I’m not sure how much they can grow without more planes or people, and more planes or heavier utilization of their existing planes would presumably require more capital (like most US air operators, I assume they’re also dealing with pilot shortages). They do have a solid 10% or so return on equity, and their balance sheet obligations look very manageable given the long-term nature of most of their shipping contracts, but it’s hard to see dramatic growth from here unless those planes are flying half full and they’re going to be able to double revenue without adding flights or equipment.

And if you want some further input from other Motley Fool Canada writers, on the free Fool.ca site they posted both a negative look at Cargojet in August and (different author) a bullish note in September. And yes, one analyst did call Cargojet the “Amazon of the North” in a bullish note after the Amazon warrant deal was announced.

Personally, I come away from my first exposure to this company with the feeling that it’s a good company, with a nice ramp up in growth over the past few years, and a solid relationship with Amazon that will help keep cargo volumes high and probably provide additional revenue growth as Amazon continues to expand its business in Canada (though Amazon doesn’t tend to let its suppliers charge very much)… but they seem to me to be priced for that already, and it’s hard to see any rapid growth from here. Without rapid growth, I might opt instead for the relative safety of one of the big aircraft leasing firms if I wanted to play the general rise in demand for air cargo and air travel (Air Lease (AL) or AerCap (AER)), or even take a look at the recently beaten-down Atlas Air Worldwide (AAWW), which just reported a bad quarter today (I don’t own any of those, to be clear).

Perhaps you’ll feel differently, and maybe I’ll change my mind — feel free to try to convince me with a comment below.

P.S. We haven’t heard much about the Fool’s Hidden Gems Canada service, so if you’ve ever tried it out please do click here to share your experience with your fellow investors. Thanks!

Disclosure: Of the stocks mentioned above, I own shares and/or call options on Amazon. I will not trade in any covered stock for at least three days, per Stock Gumshoe’s trading rules.

Been holding Cargojet Convertible Debentures for many years. Safe alternative to a GIC and have had a strong upkick due to share appreciation

What do you think it is? Key clues I scraped from the ad are…

I don’t think you’ll find a better match, but if you do I’ll be happy to hear what it is.