Here’s the teaser pitch that caught the attention of some Gumshoe readers this morning:

“Not to alarm you but you’re about to miss an important and rare event.

“Renowned investor Tom Gardner has identified a stock that he thinks resembles Facebook before its IPO.

So what’s the story? Well, it’s a pitch for the Motley Fool Stock Advisor newsletter, which is helmed by the founding Fool brothers Tom and David Gardner. And over the years they’ve made a habit of particularly trumpeting the stocks that both brothers like (Tom tends to be the “value” guy, David the “growth” buy, so they refer to these stocks that both of them like as “total conviction” investments).

“across the 21 stocks Tom and David have agreed on…

“The average return for each stock is an astounding 473%!”

I’m sure that number is accurate, but it’s also over a long period of time and, more importantly, it is dramatically skewed by a couple hugely dramatic stock gains — particularly the 8,000%+ gain in Netflix (NFLX) since both brothers jumped on it more than a decade ago.

But still, we want to know what the stock is — what’s the story?

Here are our clues:

“This tiny internet company is about 1/279th the size of Facebook.

“Yet, we think it has a jaw-dropping market opportunity that could be bigger than 2016 total sales of Apple, Amazon, Facebook, and Google – combined!

“This small cap stock has already banked $429 million for its young CEO.

“You see, Tom thinks this company’s product holds the key to even higher earnings as more and more people ditch cable for streaming TV.”

So part of their thesis is that there’s more to come from the “cord cutting” surge as people cancel their cable TV and rely on online streaming… and that this company is somehow making money from that:

“… while the ‘cord cutting’ trade has pushed millions of investors into Amazon, Netflix, and Disney… all of which are near all-time highs.

And, for one more clue…

“The Motley Fool has recommended this stock four times already in the past year, and each time it’s gone on to crush the market.”

So is this, perhaps, one that we’ve already covered?

Yep, I’m afraid so — this ad is pretty similar to one that the Motley Fool was running around Christmastime, but going by the updated numbers in the ad I can confirm the Thinkolator’s answer, with more certainty… as they were doing back in January, the Motley Fool is teasing The Trade Desk (TTD) as a Gardner brothers “total conviction” pick.

Tom Gardner interviewed The Trade Desk CEO Jeff Green late last year, so you can check out that interview here if you want more background (or more confirmation of the Fools’ fondness for the stock), and in that interview Green summed up what The Trade Desk’s mission and business is:

“… our purpose is to actually fund media. And the way that you fund media is by making advertising better, and creating a better monetization engine for all of media. And for us, that specifically means that we service the advertisers in the agency. So we’re a buy-side platform, as they call it, which is a set of tools that helps agencies and advertisers buy all-digital media, so whether that’s Spotify or Hulu, or The New York Times, or Motley Fool, to essentially buy the ads on those sites using data and to make certain that you get the right ads in front of the right customers. So that’s what we’re after, and that’s what we do.”

This happens to be a stock I own as well, I bought some shares last fall after researching it when I looked into an earlier Motley Fool ad, and added to my position more meaningfully last month before earnings. It so happened that the latest earnings report was fantastic, which was probably a relief to shareholders after the November collapse in the share price, so the stock enjoyed a nice 20% pop or so last month and looks a bit more difficult to buy now.

But the future is looking a little rosier, too… my assessment back in February was that I could justify buying a small position in TTD up to about 30X forward earnings, given the small size of the company (market cap around $2.5 billion now), the large size of the market (global digital ad spending is well over $200 billion/year, and “programmatic” ad spending is growing at ~25% annually), and the expected earnings growth (analysts forecast an average of 23%/year).

At the time, that meant a maximum buy price of about $50 for me… but if you use the same assessment now, with the higher estimates for 2019 earnings, that would mean the stock is “buyable” up to about $65, which is close to the all-time high and about 10% above the current share price. There’s certainly plenty of risk, all you have to do is look at the stock chart to see that the shares do not automatically surge higher at all times and that the company hasn’t delighted one and all with a “beat and raise” every quarter during its young life (they went public late in 2016). 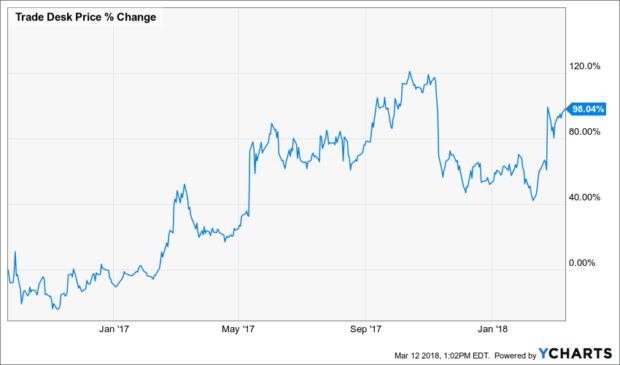 But you can also see, if you layer the revenue on top (orange line), that the business is growing nicely. 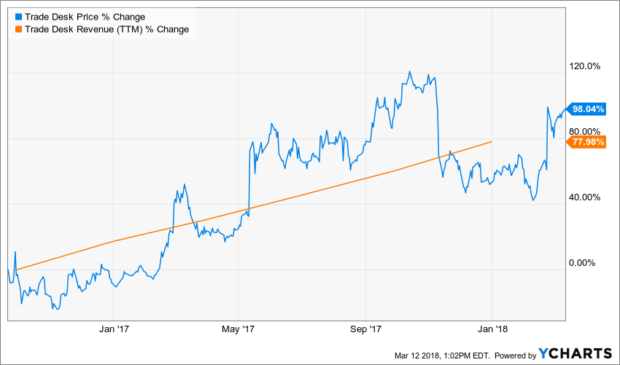 On the other hand, for those looking for a reason to be a bit more skeptical, the fundraising over the past year and a half, including the IPO, means the revenue PER SHARE is not really growing yet (red line)… that ought to improve, since they generate enough cash to sustain the business at this point, so there’s no clear reason why they’d need to sell a lot more shares in the future, but that doesn’t mean they won’t. 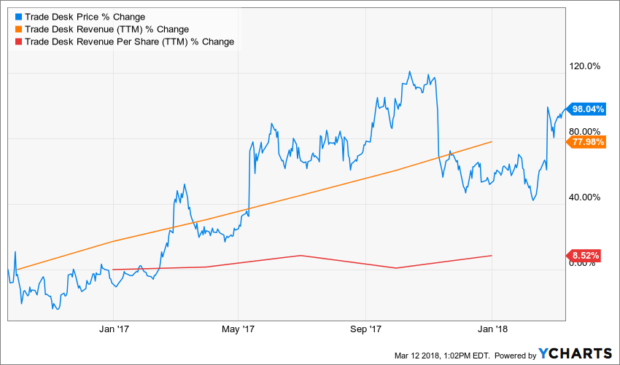 Which is why, of course, you have to make your own decision… is the underlying growth enough for this richly-valued small cap? Can they continue to grow as the market for programmatic advertising grows? Can their access to streaming video advertising give them any edge over behemoths like Alphabet? (Or even just a corner where competition is not as fierce yet?) I don’t know the answers with any certainty, which is why it’s a fairly small position — but I like what they’re doing so far, and I like their ambition.

The “ticking time bomb” quote, by the way, is also from that interview Green did with the Fool — here’s a little excerpt to give you the context of that:

“And so the TV ecosystem today, we think of as a little bit of a ticking time bomb. Which is, especially in traditional TV where the users are going away, the number of people watching is declining, but the cost of providing the service has been going up. And the price of the ads has been going up, even though fewer people are watching. And so that’s making it so that it’s less effective on a per-dollar basis than it’s been, and yet the cost of content is going up. And so that’s what we think is creating the ticking time bomb.

“And the only way for that to resolve itself is with programmatic advertising. So we’re super excited about the fact that dollars are moving into programmatic advertising, and the way that that’s working is in the new apps that you’re getting on your Roku or your Apple TV or your Samsung TV, the ones after Amazon and Netflix, like a Hulu or a Sony Crackle or a TBS, all of those have some amount of ads, or at least an ad option. And because we can target them in a way that television ads never could, as well as the fact that there’s a degree of scarcity right now, because there isn’t that much inventory, it’s making those ads go for a premium, which is actually making it so that more content owners are trying to make their content available in apps like that.”

In case you’re curious, the only clue that really doesn’t make sense, on the surface, is the $429 million “CEO bet” number… Jeff Green only holds about $6.8 million worth of the Class A shares.

But wait, there are Class B shares, too… how many of those does he hold? Those are the super-voting shares that they created, copying titans like Google and Facebook, which basically ensure that TTD’s management team and insiders have full voting control forever, and my quick check of the filings indicates that Jeff Green holds something in the neighborhood of 6.5 million Class B shares, which, when added to his Class A shares, would get you well over $400 million in value, though not quite precisely $429 million with the shares here at $60.

Green also holds stock options and is probably granted stock and options with some regularity as part of his compensation, though he has pretty consistently sold off his Class A shares, so his shareholding does fluctuate… and, of course, the price per share fluctuates quite a lot. (The Class B shares are essentially the same as Class A when it comes to ownership, it’s just that they come with 10X as many votes… so Green individually has something like 30% voting control, and other insiders also own Class B shares.)

And yes, I suppose to some degree he’s “betting it all” on The Trade Desk’s future, but, of course, he didn’t buy those shares at today’s price, he has them because he founded the company… and he’s not a “never sell” CEO — just from a quick scan of the insider transactions, it looks like he’s sold well over $70 million of his shares over just the past year (most of that was in his initial big sale after the post-IPO lockup period, but he has continued to sell smaller chunks continually since then)… so don’t weep for him or overstate his financial commitment — I’m sure he’s giving the company his all, but he’s still got that $70 million to keep him in chicken and waffles if this “bet it all” company fails.

So there you have it… more confirmation that the Fools are “total conviction” on The Trade Desk. Does that mean it will definitely go up several hundred percent like Facebook? Or even more, since it’s a lot smaller? Uh… no.

I own shares, I think it’s an attractive possibility, and I like the growth and the strategy and, because I’m funny like that and don’t want it to be all about the unseeable future, I like the fact that they are currently profitable… but I don’t think it’s a sure thing — not in an industry that’s changing as fast as digital advertising, and not for a company that is relatively small and subject to pressures from both major advertisers and traditional advertising agencies, and from the major “walled garden” publishers like Facebook and Google who control such a large part of the advertising inventory. I hope it works out well, and I think they’ve got a good chance, but I’m keeping my position small for now.

Your mileage may vary, of course — and it’s your money, so what matters is what you think — are you convinced that The Trade Desk will grow to dominate the automated ad buying process for online streaming, or otherwise expand its market in programmatic ad buying? Think the Foolish brothers will be right with their “Total Conviction,” or do you remain unconvinced? Let us know with a comment below.

P.S. We’re always collecting investor opinions about the newsletters they’ve subscribed to — so if you’ve ever taken Motley Fool Stock Advisor for a whirl, please do click here to share your thoughts on that service with your fellow investors. Thank you!