The Motley Fool has for most of this year been teasing their Shopify (SHOP) recommendation with headlines that tout the fact that SHOP’s CEO is “betting” $560 million (or now $780 million) on the stock, but today we’ve got a slightly different spiel… this time it’s Tom Gardner, Motley Fool CEO and half of the headline duo behind Motley Fool Stock Advisor, betting the Motley Fool’s money on a stock.

That’s not a shocking new thing, by the way, the Motley Fool has been investing its own balance sheet for years now — and, of course, $280 thousand sounds a lot less dramatic than $780 million. But the basic gist is the same: You should buy the stock, we’re told, because this guy who’s smarter than you owns shares.

Tom Gardner is a smart guy and has an admirable investing track record at the Motley Fool, though not nearly as exciting as his brother Dave (David Gardner has generally been the “growth” guy, credited with some of the Fool picks like Priceline and Amazon that have generated absurd returns over a long period of time; Tom has mostly cultivated the image of being a “value” guy).

Here’s part of the ad letter that caught the attention of Gumshoe readers:

“I wasn’t allowed to tell you yesterday… but I have some major (and timely) news to share.

The ad came rolling in over the weekend, by the way, so that “yesterday” is a reference to Friday… so presumably this was a recommendation that Tom Gardner made to Stock Advisor subscribers on Friday.

What else do we learn about it? The ad refers to it as a “cloud-networking powerhouse” and gives a few hints about recent performance:

“… this pioneer behind next-generation data centers and cloud networking, knocked the cover off the ball in this most recent quarter.

So what’s the stock? Thinkolator sez this is Arista Networks (ANET), which is indeed a fast-growing cloud networking company. It’s pretty big, too, with a market cap of about $13 billion.

Those clues dropped in the Stock Advisor pitch are an exact match for the company’s last quarter, reported on August 3.

I don’t know a lot about the operating environment for networking system companies, but Gartner favors Arista as second to only Cisco in the space when it comes to “vision” and “ability to execute” in their Magic Quadrant — this is how they sum up Arista:

“Arista Networks, based in Santa Clara, California, is focused exclusively on data center networking and continues to grow above market rates, reaching a 9.8% revenue market share in 2016. Its Extensible Operating System (EOS) software is highly programmable and can be integrated with nearly all third-party cloud management and orchestration infrastructures. Arista’s CloudVision provides a central point of management, facilitating integration with third-party controllers (including VMware NSX). The vendor’s hardware strategy is based on leveraging merchant silicon from multiple suppliers and thus its focus is primarily on software and management, although Arista has shown an ability to deliver optimized merchant silicon-based products. Over the past year, Arista introduced support for data center interconnect (DCI) through the R-Series and announced containerized EOS for disaggregated use cases that use third-party hardware. The vendor also delivered more streaming telemetry capabilities, to improve visibility of network performance. All enterprises should consider Arista, particularly large organizations with advanced requirements that need flexible and programmable solutions. The resale partnership with HPE will help Arista increase global market coverage.”

Stock Gumshoe depends on these kinds of technologies to maintain this lovely website for your edutainment, of course, but I can’t claim to have any inside knowledge or independent understanding about whether or not Arista is particularly strong in “streaming telemetry capabilities” or “orchestration infrastructures,” but the Gartner endorsement is pretty impressive — you can see it here, along with their strengths and cautions about Arista.

To give another perspective, from the usually pretty cautious Morningstar folks: They give it a “fair value” of $136, so it’s well over that and is roughly 30% overvalued, in their analyst’s opinion… probably mostly because they don’t have much of a “moat” in what is likely to continue to be a very competitive market.

Right now, though, they’re doing exceptionally well — part of the reason for that big “beat” last quarter was their lower tax rate, and their margins improved because R&D and other costs did not rise as fast as revenue… but the huge jump in revenue has really been the big driver, which you like to see for a growth stock.

And if you go back a few years and can get over the fact that you’d prefer to have bought it at $90 a year ago, you can at least see that the fundamentals are also growing at a torrid rate — this chart just demonstrates that revenue per share (up about 75% in three years) and earnings per share (up 170%) have been supporting the share price gain of 185%. The trailing PE ratio (that green line at the bottom) hasn’t really changed at all, so investors aren’t just changing their sentiment and deciding to pay a higher multiple for Arista’s earnings — the company has actually been growing. 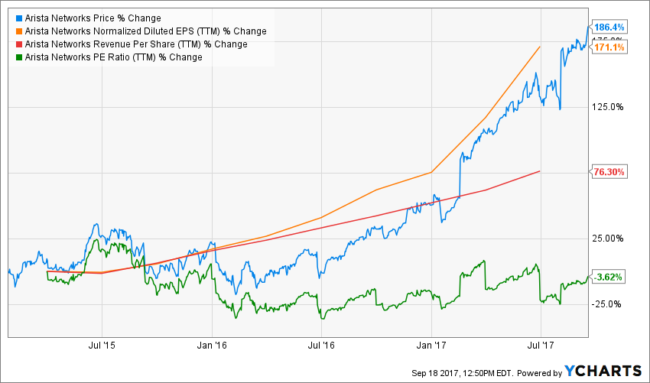 So ANET is currently at $185 (it did pop at midday on Friday, and again this morning, so that’s another confirmation, though unneeded given the certainty of the match, that the Fool issued its recommendation for the stock — Stock Advisor recommendations go out at Noon on Fridays). At that price, you’d be paying 39X current-year adjusted earnings estimates of $4.71… and 33X next year’s estimated earnings per share. There’s some net cash on the books, roughly a billion dollars, but not enough that you’d change your thinking about the company’s valuation.

Are you getting our free Daily Update <br /