Since we’re still close to being in the afterglow of the Berkshire Hathaway Annual Meeting, when Warren and Charlie (and now Bill Gates, too) are trotted out on CNBC for hours at a time to share their avuncular wisdom, it shouldn’t be terribly surprising that we’re seeing a few “next Berkshire” pitches again.

“You probably already know this: Warren Buffett’s Berkshire Hathaway has racked up amazing, life-changing returns over its 50-year history. Anyone who got in early and held on turned a mere $1,000 into more than $12 million!”

And, of course, that’s what we all want — the chance to put up a small investment and someday own a baseball team and get our alma mater to name a building after us… is that so much to ask?

OK, fine, we’ll settle for helping our kids go to College and retiring without panic… who knows, just that might cost $12 million by the time I’m ready to toss my keyboard in the trash and enjoy my golden years.

We’ve seen these kinds of promotions for years — lots of folks promise you the chance to get in early on the next Warren Buffett, and they’ve been doing it for longer than Stock Gumshoe has been around… some of my first articles in 2007 were about “next Berkshire” ideas, and it wasn’t a new notion then.

But hope springs eternal… so what’s the stock getting the Berkshire Baby treatment today? More clues from the Motley Fool:

“… what if we could find the next Berkshire Hathaway… a company with the same smart leadership that uses Buffett’s disciplined, common-sense approach of leveraging the insurance business to buy other stocks, bonds, and entire companies? And a knack for finding winners in “obvious” places that most people miss?

“Tom Gardner, CEO of the Motley Fool, believes he has found the perfect ‘mini-Berkshire.’ He’s confident enough in this company that he’s recommended it three times to his members… and that’s something that just doesn’t happen very often.”

OK, so that’s the “triple buy” part of our headline — apparently this has been thrice recommended by one of the founding Fool brothers (Tom Gardner is generally the more value-focused of the pair, his brother David Gardner, whose record is dramatically stronger, is the one who bets on growth and won huge with stocks like Priceline and Amazon in their early days).

What else do we learn? We’re told that this stock is “only 1/30th Berkshire’s size” … that “this mini-Berkshire’s CEO is a charismatic investor and a proven winner” … and that the stock has risen almost 10,000% since it was started 30 years ago. So what’s our stock?

This is, sez the Thinkolator, our old friend Markel (MKL). Which I expect I’ve probably owned for about as long as Tom Gardner has been recommending it, perhaps longer. 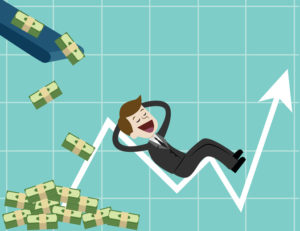 Markel is a specialty insurance and reinsurance company, and the comparisons to Berkshire Hathaway come because they make some effort to emulate Warren Buffett’s insurance conglomerate — they allocate much more money to investing in equities than more conservative insurance companies do, using the value investing philosophy of co-CEO Tom Gayner, who is widely admired as an investor, and they even have been buying up smaller operating companies as well to diversify. They also are good at communicating fairly with shareholders, and they have much better employee incentives than most companies (they base incentive bonuses not on the share price or the quarterly returns, but on the rolling five-year growth in book value per share, a far superior measurement for an insurance company that’s trying to grow rationally and profitably in the long run).

The company has grown pretty dramatically over the years, though the biggest single spurt of growth came with their acquisition of Alterra a few years ago — and the drop of the shares following that acquisition announcement in late 2012 was, coincidentally enough, also the last time that I was really excited about buying more Markel shares.

I wrote what I think is my best semi-recent assessment of Markel after my visit to the Markel Breakfast in 2016, just about two years ago (the last time I was in Omaha for the Berkshire meeting, upon which the annual Markel Breakfast is a bit of a lamprey).

At the time, I essentially said what I’ve now reiterated several times in recent years: Markel is a great company, I’d be happy to own more of it than I do, and if you can hold on for a decade or more it will probably do pretty well even if you overpay today… but it’s too expensive right now, and a price/book valuation of well over 1.5 assumes too much future success.

As I noted, though, that doesn’t mean it’s a “sell” — and I still feel that way. Two years ago, Markel was trading at almost 1.6X book, right around $900 a share, and I thought that was too much. Since then the price/book valuation has risen and it’s now at almost 1.7X book, and book value has also gone up a little bit, so the shares are in the low $1,100s.

I’m still holding, and I consider this a core position that won’t be easily shaken loose from my portfolio… but that doesn’t mean you have to buy it when it’s relatively expensive, and I haven’t added to my position in quite a while. The oft-cited comparison to Berkshire Hathaway (BRK-B), unfair though it is to both companies on a basic level, caused me to note two years ago that Berkshire was much more appealing at the time, given its valuation, even though the long-term growth might be less compelling because of its much larger size.

And not to pat myself on the back, but that was the right call (I make lots of wrong calls as well, longtime readers will need no reminder of that). Since that Omaha weekend in early May