I’ve recently gotten a bunch of questions about an ad that’s actually dated October, 2020… so it’s a little bit of a dated pitch for Ian King’s New Era Fortunes ($1,950/yr, no refunds), which I haven’t covered yet….

But today, it’s being pitched with a new intro from Banyan Hill that promotes a current recommendation, what they say will be Ian King’s eighth recommendation in this newsletter… so let’s take a look and see if we can figure out what that will be, shall we?

These are the criteria he says he’s generally looking for, taken from the full ad:

“What I’m looking for is a company with a line of business that’s underpriced by investors.

“Ideally, a new business venture that Wall Street is overlooking but has the potential to disrupt an entire industry….

“I want to see that sales are increasing at least 20% or more year over year.

“That’s because sales are numbers that can’t be manipulated.

“Find a company with sales going up at a 20% annual clip, and its sales will double in five years…”

And some other items from the checklist in that October ad:

“I want to find a small stock at the forefront of a tipping-point trend in an industry that is positioned to grow by 100% or more in the next five years.

“I want it to have a lot of patents in place protecting its products.

“It has to be an innovative company that’s solving a huge problem.

“It has to be listed on a major exchange.

“Its gross margins need to be stellar and consistently growing.

“It must have a large and growing distribution network.

“These are just a few of the characteristics I’m looking for with every potential recommendation I’ll make in the new venture I’m launching today.”

And here’s what was hinted at in the emails from Banyan Hill that I received yesterday… so we don’t know which day King’s next recommendation might be released, but it’s apparently “soon” …

“Six of the seven recommendations in my colleague Ian King’s small-cap service New Era Fortunes are up 40% or more in just 33 days… Gaining as much as 110% more. And Ian is about to release his eighth recommendation.”

It’s been a good year to introduce a new newsletter, that’s for sure — growth out the wazoo, as we used to say. So whatever will that eighth recommendation be?

These are our hints… it’s a SPAC, which seems to make everyone’s heart go pitter-pat this year:

“It involves a small, private firm that makes navigational chips for autonomous vehicles … a leader in a potential $200 billion market. And its revenues are expected to surge 176 times by 2025….

“Shares of the SPAC are trading for just $14 right now.

“But Ian doesn’t think they will stay anywhere near there for long.”

So… hoodat? We’re in the somewhat shocking position now of having at least three new LiDAR names come public through SPACs in a single year, not bad for a technology that Elon Musk himself has often written off as “doomed,” but which one is this?

Thinkolator sez that King is very likely to be teasing Aeva, which made an agreement about a month ago to be acquired by the SPAC InterPrivate Acquisition Corp (IPV), a deal that will likely be closed in the first quarter of 2021 (nothing is guaranteed, of course, it’s been an extraordinary year for SPAC deals, and most of them go through thanks to the heady incentives all parties have to consummate these deals, but they do occasionally fail or face delays).

The November investor presentation to announce and promote the deal, Aeva’s leaders came from the consumer tech world (Apple and Nikon) and they have been developing their “4D LiDAR” product for just three years, with a couple prototype models developed and some partnerships with automotive industry leaders… and, this year, a production partnership with ZF, a large German auto supplier, to produce their LiDAR components at scale. Eventually.

And if you want an indication of why a SPAC is targeting a LiDAR company, you need look only as far as the last two LiDAR companies to go public through SPAC mergers… Luminar (LAZR) and Velodyne Lidar (VLDR), this is what those stocks have done in the past few months as those SPAC mergers have been consummated: 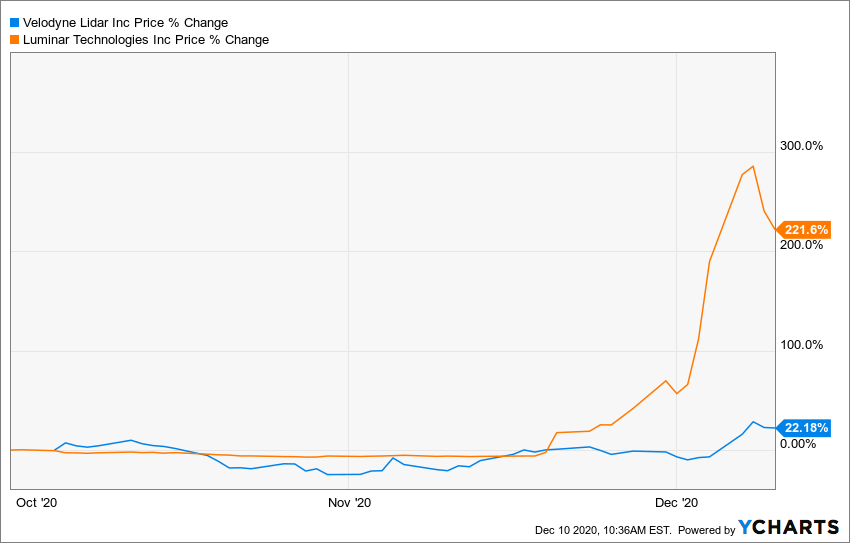 Like with other Lidar names, it’s likely that meaningful auto industry revenue for Aeva is at least four or five years away — like LAZR and VLDR and some other “next generation auto supplier” companies in batteries, the presentation hig