McCall’s “Folding” breakthrough: How to profit from “The Smartphone that Will Change the World?”

The latest Investorplace pitch for Matt McCall’s Investment Opportunities ($99/yr) promises that we can cash in by “joining the Foldable Phone revolution”… and that sounds both fun and lucrative, so let’s check out the ad and see if the Thinkolator can ID his investment ID for you.

The dream of a flexible phone screen has been around for as long as smartphones, we’ve seen plenty of science fiction-looking scrolls and roll-up phones and other origami ideas, maybe patented but not yet feasible, for most of the last decade… and apparently they’re now coming to real life now, and Matt McCall is super excited… here’s a taste of the ad:

“The next-generation smart device will fold into and out of virtually any device you need as easily and as effortlessly as folding a piece of paper.

“A smartphone. A tablet. A smartwatch. Even a laptop computer.

“Now, I know the thought of being able to fold a device into any shape might seem impossible…

“But now, thanks to a groundbreaking innovation, the technology now exists to make this dream a reality.

“That’s why companies are rushing at breakneck speed to bring this technology to market.

“THIS is the future of mobile communication. One device to end all devices.

“PhocusWire calls it the single biggest shift in mobile devices since Steve Jobs introduced the iPhone in 2007.

“Time.com says it will ‘forever change how we interact with our technology and create and consume our favorite content.'” 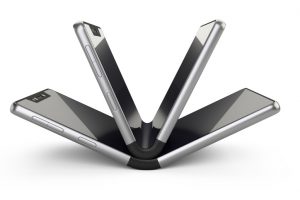 OK, we’ve all seen the pictures of phones with folding screens, and maybe even snickered a little bit when Samsung rushed out their folding screen phone last year and ran into “um, the screen cracks in the middle!” complaints… but it does seem to be the clear direction we’re heading in, with my teenagers, at least drooling over the new Motorola Razr and Samsung Z Flip phones.

Screens that can fold in half to slip in your pocket, avoiding the dreaded “pocket dial” and helping to avoid cracked screens… that just makes sense. Even if the folding ones, so far, are probably too fat to be happy in most pockets — one assumes that, like everything else in technology, they will probably continue to get thinner and more powerful. 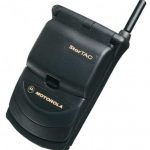 Of course, it was also clear 25 years ago, when the first flip phones were popularized (I still remember my Motorola StarTac fliphone, and the fact that stumbling through a text using the numeric keypad cost me $1 a pop), that the direction we were heading into was ever-smaller cellphones… and I confess that I personally joined the scoffing chorus when the first U.S. camera phone was released in 2002, and also thought the trend toward phones with massive screens was silly, and those all were hugely popular ideas that made billions of dollars, so one hesitates to speak with certainty about what the future holds.

“Samsung’s next foldable-phone initiative, dubbed ‘One Device to Rule them All,’ might be the biggest innovation in mobile technology to date…

“The massive $11 BILLION project features a patented display that can take the shape of anything you want.

“A smartphone. A tablet. A smartwatch.

“DJ Koh, head of the company’s mobile business says, ‘To those who say they’ve seen it all, I say, buckle your seatbelt, the future is about to begin.'”

Plenty of companies have talked about or even patented such “watch to tablet” flexible displays, including IBM in 2019, and Samsung is certainly taking the lead in foldable displays at the moment, but that DJ Koh quote is just from their relase of the Galaxy Fold last year.

And the rumors swirl, of course, about Samsung’s biggest competitor…

“The iPhone is going foldable too.

“The rumors on the inside are, the new folding iPhone prototype is even better than Samsung’s.”

There are always Apple rumors, of course, but it’s natural that they’re working on folding phone projects — not so likely for this year, but one never knows. They patented some folding designs last year, and there were rumors about a folding iPhone in 2017 and about new possibilities from Corning’s new foldable glass products… though the latest rumors last month were that Apple might first come out with a hinged design using two screens instead of a seamless fold.

Regardless, the technology continues to advance, and I guess the real world use of thew new folding phones from Samsung and Motorola will start soon to give us some idea of the durability of the technology… and, perhaps, some insight into whether this will really be a hot trend, or is a solution in search of a problem.

McCall is far more certain than that, though — as one has to be when trying to sell a newsletter, I suppose. Waffling and “on the other hand” thinking may fill up the column inches here at Stock Gumshoe, but it doesn’t sell. Here’s more from the ad:

“The bottom line: It may be decades before we get another chance like this, to get in at the very start of a major technological shift…

“For early investors, it presents the kind of moneymaking opportunity that could turn a tiny initial stake into an absolute fortune.

“So how can you position yourself to profit from this opportunity?”

And that’s when it becomes clear that he’s looking at component suppliers, not devicemakers — he wants to invest in the screen technology itself. As he puts it:

“Invest in the screens….

“By far, the best way for you to capitalize on this trend is to invest in the company developing the one key component that all the phone makers must use.…

All the leading display-makers are working on curved and folding screens, of course, and have been for years… so which company is it that he thinks will lead?

We finally get into some clues from the ad, as McCall spins the story of the first folding screen:

“Over the years, you’ve probably heard a few terms being thrown around like liquid crystal, LED and plasma….

“But not too long ago, scientists working at one little-known company made an even bigger breakthrough in screen technology… called a flexible organic LED screen. Or F-O-L-E-D.

“It’s a display that is thinner, lighter and more durable than we could ever imagine.

“It can bend without breaking.

“In fact, some screens are elastic enough to be rolled around a pencil without any kinks or creases…

“And not too long ago, a lone engineer got a wild idea to build a phone using one of these bendable, indestructible marvels…

“The engineer’s early prototype could be folded and unfolded 200,000 times a year without breaking. That’s over 500 times per day!

“Which meant companies could bring the foldable phone to market.

So what is the company behind this FOLED folding screen? Here are the hints for you…

“It’s a company that currently holds over 5,000 patents for organic LED screen technology.

“It’s already inked deals with Samsung, Apple and LG. Three of the top smartphone manufacturers in the world.

“Those three companies make up over 25% of the global market share.