What’s Bill O’Reilly’s “You Gotta Tell Me What the Stock Is, I’m Hooked!” Teaser about?

This article was originally published on September 18, 2019, but we’re getting lots of questions about the ad as it’s being re-circulated with Bill O’Reilly’s “You Gotta Tell Me What the Stock Is, I’m Hooked!” teaser line today. The stock is at roughly the same price it was when first teased three months ago, and what follows has not been updated.

It seems that the plague of celebrity endorsements is washing across the newsletter world these days, with CNBC star Robert Herjavec pitching a “buy private companies” network, former House Speaker John Boehner touting a marijuana stock service, and now, political lightning rod Bill O’Reilly from Fox News being pulled in to Oxford Club’s “The Great American Wealth Project” (and throwing a copy of his Trump book into the “special offer,” which, like the last Oxford Club pitch we looked at, is $99 and an autorenew at $79/yr)

This is really not so different from having a handbag designer or weight loss product spend half a million bucks to get Kim Kardashian to post on them about Instagram, of course… newsletter publishers know that using a name brand “influencer” like O’Reilly or Herjavec will resonate with a big chunk of their target audience (dudes in their 50s and 60s who have an interest in investing or are worried about retirement).

In this case, it was a big “presentation” that O’Reilly did with Oxford Club honcho Alexander Green yesterday, staged as an interview of Green where Bill asks him “tough questions” about how to achieve a seven-figure portfolio. (To be clear, I don’t know if O’Reilly was paid to “interview” Green for this ad or they have any other relationship… he does say he’s been a longtime Oxford Club subscriber)

The ad claims that buying the Alex Green picks in the Oxford Club portfolio over the past 18 years would have given you dramatically better performance than buying the broad market. I don’t know how rigorous that comparison is or what the inputs were, and don’t know the Oxford Club’s historical performance, but it was often among the most consistently solid newsletters tracked by Hulbert until he dramatically scaled down that tracking service a couple years ago, performing better than most newsletters in both up and down markets. (I’m sure, at least, that their overall performance is better than the performance of the “get rich with this one pick” ideas they’ve teased over the years — it would almost have to be… though, to be fair, The Communique has teased a few big winners along the way, in the past five years their best teased stock was Five9 (FIVN) in 2016 and their worst was Chicago Bridge & Iron (now McDermott, MDR) in 2017… you can always see the details on our tracking spreadsheets).

The big picture promise is really just “you can get rich by investing, and don’t be scared off by the media” — and that’s a reasonable thing to say. Here’s a bit from the transcript:

“Bill: Why is that? What’s keeping regular folks from getting rich?

“Alex: One reason is a basic lack of financial literacy. Schools don’t teach it, and most parents don’t know enough to instruct their kids either.

“But the #1 reason is that the media is FAILING at its job to inform the public about the incredible wealth-building opportunities available right now.

“If you look at the headlines, you’d think the country is struggling economically.

“The media scares the hell out of people, to the point where they’re afraid to put their money in the markets.

“And the average bank currently pays just 0.05% on deposits. At that rate, your savings will double in just… 144,000 years. Clearly, no one is getting rich that way.

“As a result… there are three major problems facing most Americans.

I can’t argue with that… there is a savings crisis in the US, even if it’s probably not as bad as the headlines (“more than half of Americans would go bankrupt if their car needed a repair!”), and yes, I’m sure a lot of Americans who have been able to set aside some savings have invested too cautiously because they’re fearful of the market. Many have probably missed out on this decade-long bull market, thanks both to demographic trends (most of the money in the market is owned by people near retirement or in retirement, who naturally should reduce the riskiness of their portfolios as they age), and to the scare put into them by the dot-com bust 20 years ago and the global financial crisis ten years ago. I can’t blame people for fearing the market’s ups and downs, but avoiding the market for the past decade certainly hasn’t helped anyone.

Even when saving well or trying to be exposed to the stock market over the long term, US investors are below average — one of my favorite news items each year is the release of the Dalbar Study, which follows a lot of behavioral finance trends but, on this point, tracks the average performance of US investors compared to the benchmarks. US investors are terrible at investing, on average, and have been for decades, and it’s (mostly) not because they pay fees that are too high or choose the wrong stocks — it’s because they try to time the market, pulling money out when they’re scared and throwing money in when things look good and they want to try to “catch up.” The average US investor had a loss of 9.4% last year, when just sitting in an S&P 500 index fund for the full year would have resulted in a loss of only 4.4%… and given the crazy start to this year off of those winter lows, I’ll be surprised if the gap in 2019 isn’t worse. This is a quote from their press release about the study, and they end up having to say something very similar pretty much every year: 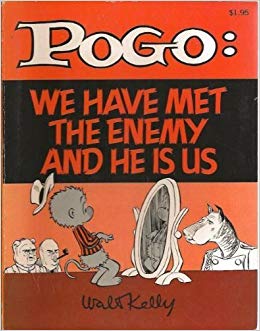 “‘Judging by the cash flows we saw, investors sensed danger in the markets and decreased their
exposure but not nearly enough to prevent serious losses. Unfortunately, the problem was compounded
by being out of the market during the recovery months. As a result, equity investors gained no alpha,
and in fact trailed the S&P by 504 basis points.’ said Cory Clark, Chief Marketing Officer at DALBAR, Inc.”

But anyway, back to the teaser… what’s Alexander Green’s solution to this savings crisis?

“There’s only one surefire way to retire wealthy in America.

“Sometimes, just ONE great company… ONE single stock… can pay for your entire retirement.

“And I’ve got the details on the new #1 Stock in America right now.”

Sound familiar? Yes, Alexander Green has been touting this “one stock retirement” idea for well over a year now in teaser ads for the Oxford Club, mostly hinting that he thinks Foxconn is the best stock to build your retirement around… it should sound familiar to ardent Gumshoe readers, since we dug back into that spiel