What’s being hinted at as Ray Blanco’s “1 Stock for a Life-Changing Marijuana Payday?”

Solving Blanco's "Starting on March 29 August 1, You Could Amass More Millions Than You Could Ever Spend" Marijuana Pitch for Penny Pot Profits

This article was originally published on March 15, 2019, when we first saw the ad — there is a new version now, slightly updated but teasing the same stock and promising a new “hot” deadline, so we’re republishing this here with very minor updates.

This particular ad is of the “Indiana Jones” variety, which is my favorite kind of ad… it spins a yarn of a high-risk adventure, deep in the forbidden jungle, to discover a massive profit opportunity. How can one resist?

Well, we’ll try. And the best way to resist a sales pitch, of course, is to understand it. This spiel is from Ray Blanco for his Penny Pot Profits newsletter ($1,995/year, nonrefundable), and he’s hinting at “The 1 Stock for a Life-Changing Marijuana Payday” … so what is it?

First we’ll slap ourselves in the face a bit, splash on a little cold water, and remind ourselves that no, there is no “one stock” that will change our lives (or if there is, we certainly won’t know which one it’s going to be in advance… diversify!)

But yes, we’ll throw the clues into the Thinkolator for you and get some answers percolating… so what are those clues?

Here’s the final sell on the order page (sometimes we like to work backwards):

“1. This company will finally finish construction on their newest processing facility [in April, he added: “allowing them the ability to fully harvest and process 5,530,000 kilograms of medicinal grade marijuana.”]

“2. As soon as they do, they’ll have everything in place to begin commercial sales of their medicinal oil extracts, sending billions rushing onto this company’s balance sheet — a rate never before seen in history for a company this small. [Again, back in April this was expanded to say: “As soon as this happens, its share price could explode faster than ever before seen in modern history.”]

“3. By the time every newspaper, blog and TV show around the world are all left speechless by this company…

“… a select few investors who acted fast on this story could start walking away with more millions than they could ever spend.”

The “Indiana Jones” part of the story is the lead-in…

““When the Armed Guards Confronted Me… I Knew I Was Just Moments Away From the Biggest Stock Discovery of My Career….

“This could go down in modern history as the biggest stock market gain ever seen.”

And he includes a photo of what looks like a warehouse under construction, somewhere in the Andes, and says…

“But it’s hiding one of the biggest secrets of the 21st century.”

What else are we told?

“… its shares are still trading for just pocket change.”

And the insiders are somehow compelling people, and have been “acquiring” shares (note, that’s often different from buying shares — insider buying is a bullish signal, insiders giving themselves shares… not so much bullish).

“Over the Past Few Weeks, Company Insiders Have Acquired Over 1,815,000 Shares…. 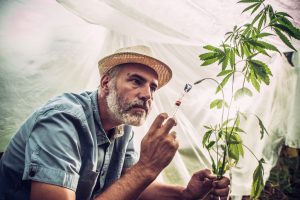 “One is a published author and international lecturer. From being a former adviser to the United Nations to helping establish the prestigious World Health Professions Alliance, he‘s quietly becoming one of the most influential people of the 21st century….

“Another has spent the past 27 years building some of the world’s largest companies. Most recently, he helped build a business to over 17,000 employees….

“Another is becoming one of the most celebrated and respected entrepreneurs and investors in the world. He’s on the board of some of the most powerful finance institutions in the world, like JPMorgan Chase Bank and President’s Choice Bank, to name a few. He even founded one of the world’s fastest growing personal finance startups.”

And what’s so special about this company? Apparently it’s a marijuana grower… and something about its location or its technology or techniques means that Blanco thinks it’s going to become the low-cost leader:

“This company has done what John D. Rockefeller and Standard Oil did in 1870.

“Through an innovative harvesting process that involves the use of…

“They’ve been able to cut their costs to about 5 cents a gram — a number so low they were almost embarrassed to share it with me.

“On top of that — they created some of the highest quality products on the market.

“In fact, they have over 150 registered strains of medicinal-grade cannabis!”

He also says that the “average grower” pays more than $1 per gram of marijuana, so this is a 95% lower cost. That seems like a number you’d want to double-check, I don’t know what the average cost of marijuana production might be.

And, of course, he throws out the conservative-sounding but completely unsupported numbers about “if the company takes over just a little fraction of the global industry…”

“Just imagine, conservatively speaking, if this tiny company only manages to capture 10% of the legal marijuana market…

“Billions would start flowing into this tiny company!

“Even that would be enough to build some of the fastest fortunes in history.”

Sure, I suppose it’s possible that a little startup that just built its first facility will take over 10% of the global cannabis industry someday… but it ain’t a “conservative” guess.

Any other clues? He does tell us the size of the growing operation…

“This company has over 12.1 hectares (or 1.3 million square feet) of greenhouses to grow their marijuana…

That would indeed be dramatically more efficient production than the big Canadian growers — if the stats in this article are correct (I didn’t check), then the largest Canadian growers are on pace, as a group, to have more than 10 million square feet of production space over the next year or two and produce about three million kilograms of marijuana flower per year.

Heck, the Emerald Health/Village Farms partnership has the potential to put almost five million square feet of greenhouse space into marijuana production itself if they wish (they’ve only committed to less than a quarter of that so far, but have the vegetable greenhouse space and extra land they could use)… though at current production estimates that would apparently only provide ~400,000 kg/year.

So if Blanco’s calculations make any sense, then a greenhouse operation near the equator is dramatically more efficient than a greenhouse in Canada. I’ll buy that, but don’t know if it’s anywhere near as dramatic as he says — it seems like 1 million square feet of greenhouse space would be expected to generate something in the range of 100-150,000 kilograms of marijuana flower a year in Canada, could that same space really generate 50X as much in Colombia? Maybe, I guess, I’m no horticulturist, but there’s room for some skepticism.

But anyway, now that we start with a little skepticism… what’s the company? This is the Canadian/Colombian marijuana producer PharmaCielo (PCLO on the Canadian Venture exchange, PHCEF OTC in the US). They went public through a reverse merger with a Canadian blank check company that consummated in January, though also raised money in a private placement last year that was widely covered in the marijuana investment press.

And it’s a fairly big company