Koyfman’s “Liquid Electricity” to create “Energy Out of Just Air and Water” and Hand You up to 11,300%?

What's teased in Microcap Insider's pitch about "The NH3 Revolution: How a Tiny Toronto Startup Beat a $3.3 Trillion Industry"

We got lots of questions over the weekend about the latest Microcap Insider teaser pitch, so that’s how your friendly neighborhood Gumshie is starting his week… Alex Koyfman’s ad about the “oil killer” starts out like so…

“A Little-Known Fuel Is Set to Revolutionize the Energy Sector in the Coming Years — This has NOTHING to do with Batteries, Hydrogen, or Nuclear Fusion”

And it leads off with a patent for “producing ammonia from air and water,” which is the basic promise — ammonia (NH3) is mostly a fertilizer, so producing it more cheaply or efficiently is always welcome, but the pitch here is for using ammonia as a fuel.

That idea is not brand new, ammonia has been proven to work as a fuel in both internal combustion engines and in fuel cells, and chemical methods for producing ammonia have been around for more than 100 years, but fixing nitrogen from the atmosphere to create ammonia is a fairly energy-intensive process, and there’s been a meaningful push for creating “green ammonia” in recent years, both from “reverse fuel cells” and from just replacing the energy input for “brute force” conversion of ammonia (using solar power, for example, instead of other energy to create the pressure required to make the old Haber-Bosch process work).

And that’s what Koyfman is teasing today, some little Canadian company that has a machine and a technology for generating ammonia… and which therefore could slit itself in as a “green” business that generates ammonia in modular machines, where it is needed (for farms, for refueling stations, for clean energy storage, etc.) Is this just the latest iteration of a dream we’ve seen touted before (like this story about portable ammonia factories a decade ago?), or is this the real breakthrough that will make a leap forward possible?

Here’s some of the pitch… 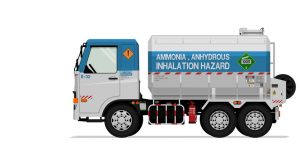 “This disruptive invention was developed in cooperation with the University of Ontario, and one sub-$1 Toronto-based company is behind it all.

“As soon as it’s released I expect it to almost instantly disrupt nearly every aspect of the $5 trillion global energy market.

“Because this technology could unlock an unlimited supply of cheap zero-emission fuel.”

And apparently ammonia is pretty impressive as a fuel…

“… this is a universal fuel. It can be used for everything.

“It can power your car…

“These are not hypothetical examples. This has been happening for years.”

And then, of course, we get to the “one tiny company” bit of the pitch…

“As I said, the science behind this fuel is NOT new.

“Chemists have known how to produce it for over 100 years. Half of the world’s population would not be alive today if it wasn’t for this discovery.

“The problem was they couldn’t figure out how to produce it on the mass scale required to fulfill our energy needs.

“That’s what this Canadian company’s invention is about. It puts this Nobel Prize-winning discovery within reach of the mass market.

“I’ve been investigating this company since it was reserved for insiders as an exclusive private placement.

“Recently, this opportunity opened up to everyday Americans.”

So that’s the spiel, a secret stock, a new process for creating ammonia, a little Canadian company, and riches await… so what’s the stock?

We do get a few specific clues, beyond the partially obscured patent image they share…

“As of this publication, the stock was trading at a barely $15 million market cap.”

OK, so we can be pretty sure that’s not true anymore — even just recommending a $15 million penny stock to a midsize newsletter will usually cause the price to go bonkers, teasing it out to thousands of other folks, some of whom will subscribe and/or sleuth out the answer and want to buy it, quite often leads to a really big pop.

More of the clues are in the intro to this specific company’s story:

“Why don’t we run our cars, airplanes, and ships on ammonia already?

“Well, unfortunately, the Haber-Bosch process, aside from helping to create the modern world, is also quite dirty and expensive.

“It requires enormous amounts of heat, pressure, and fossil fuels — such as coal, oil, or natural gas — to make NH3 in chemical plants….

“Creating NH3 this way consumes so much energy that it’s simply not economically feasible to use it as a mass-consumption fuel.

“When compared with the abundance of cheap, easy-to-refine oil in the ground, ammonia as fuel just didn’t make sense.

“Because one inventor from a small town in Ontario found a way to produce NH3 without using any fossil fuels at all.

“His machine generates it from nothing but air and water.”

Well, air, water and some kind of catalyst, one assumes, whether that’s brute force energy or something else. Nitrogen molecules (N2) don’t split themselves and reform with hydrogen, they need a push.

“This invention has caught the attenti