What's being hinted at as an "old faithful" recommendation for Stansberry's Investment Advisory?

This “tease” isn’t from a regular ad, it’s from a “free” article that Porter Stansberry posted earlier this week… but a couple readers asked about it, and I was curious myself, so I jumped in to check out the clues.

Maybe it’s just that this ad hints at a non-sexy and rational-sounding investment at a time when I’m getting a little jittery about the irrational valuations out there, but this language from Porter is why I looked a little further:

“It’s time to revisit – and re-recommend – an ‘old faithful.’

“This stock should be a mainstay in your portfolio. It will provide ballast and stability when the market gets choppy. And given a recent decline in the share price, this stock should do well from here even if a market correction takes longer to show up than we expect.

“Plus, it’s a perfect example of how capital efficiency produces excellent returns over the long run…

“As we wrote when we first recommended this stock, ‘The longer you hold this stock, the more rapidly your wealth will compound, and you’ll never have to sell – ever.'”

So what’s the stock? He says it’s a slow-growth business, which will turn off most investors… and that they pay a dividend, which typically exceeds capital expenditures, and has increased its annual free cash flow per share by 15% since they’ve owned it.

This talk about “capital efficient” businesses is not a new thing, Stansberry has been touting that idea for years now in his free commentaries… and there’s certainly nothing wrong with that, companies that can grow without needing a lot more capital, either because they can self-finance through high margins or because they are “asset light,” are obviously appealing.

Indeed, that’s probably what Warren Buffett would have been looking for 20 or 30 years ago, before his capital base got so big that he started to think of reinvestment potential as being more important than cash returns (his huge pile of cash arguably got him asking, “can I reinvest billions in this to grow the business, and make a reasonable return on that excess capital I have?” instead of “can this business thrive without more capital?”).

And he compares the company to General Electric (GE), which has finally become the poster child for “disastrous capital management” in recent years. He says that both companies had almost identical revenue growth over the past 25 years, roughly 3.4% per year… but that GE saw its free cash flow per share actually decline over that 25-year period (by 16%, in total) while “Company A” saw 3,571% growth in free cash flow per share (15% per year).

His more detailed expounding on that helps us to easily confirm (and, frankly, he’s not trying that hard to keep it a secret) that Porter is again talking up and recommending Hershey (HSY), the candy giant. 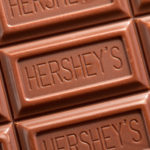 He went into his bullish case for Hershey in some detail back in January here, and apparently first recommended the stock at the end of 2007, since which time it has beaten the S&P 500 (roughly 200% vs 130%, including dividends). He even dubbed it a “Magic Stock” a couple years ago.

The biggest news out of Hershey recently has been the acquisition of Amplify at a huge premium, in a deal that closed on January 31. Perhaps that’s part of the reason why HSY stock is right now in what I’m pretty sure is the worst decline it’s ever had since Porter recommended the stock back in 2007, down about 22% from the highs it hit just about a year ago and almost re-tested in December — Amplify is not a massive company, but at over a billion dollars it was a meaningful deal for a $20 billion company like Hershey, and it certainly looked expensive. Perhaps it even looked a little desperate, at a time when Campbell Soup was also paying a premium price to buy a snack company (Snyder’s-Lance) and when packaged foods companies all over are struggling to grow and to understand the new retail environment.

Hershey has been trying to expand beyond the candy aisle for a while, and Amplify is the biggest acquisition they’ve done recently, but the company