Checking out the latest teaser pitch for Stansberry's Investment Advisory

Today it’s the latter… because Brett Aitken and the Stansberry folks just sent out an ad that really taps into the nervousness we’re all feeling by promising, in their words, a “Government-Proof, Inflation-Proof, Crisis-Proof, Bear-Market Proof ‘Super Stock.'”

Man, who wouldn’t want that? So I’m guessing this will send a bunch of questions our way, though I just started seeing the ad a few minutes ago so nobody has really asked yet.

The pitch is for Stansberry’s Investment Advisory (currently “on sale” for $49, renews at $199), which was Porter’s original newsletter when he carved out his own little chunk of the Agora empire, and has become the real “entry level” feeder publication for Stansberry over the years.

And the basic pitch is for these kinds of “super stocks” that they’ve said they have found through past screening, with huge returns. That sounds kind of familiar… and indeed, the first “super stock” they mention is not secret, that’s Hershey (HSY) and it’s a stock they’ve similarly teased a few times over the years because of it’s incredible ability to grow the business steadily without consuming capital — Porter often refers to this as “capital efficiency,” and it’s true that companies like Hershey, thanks in large part to strong brands, can raise prices and keep growing revenue without doing a lot of investing in new plants or employees. I covered an earlier tease of Hershey here a couple years ago that went into some detail on that “capital efficient” idea, and I owned it in the Real Money Portfolio for a while as well (I stopped out earlier this year because Hershey got fairly expensive in my book, but it’s still a good company and a lower-risk stock… I just don’t see a lot of upside from this valuation, and would prefer to buy back in next time they hit a weak spot).

The general appeal is that these super stocks are safer than the market, but still deliver high returns — and that these are also the kinds of incredible investments that Warren Buffett has built his fortune on… here’s a little excerpt of the pitch:

“Now, while we’re not affiliated with Warren Buffett, he has taken the basic concept behind the strategy that I call ‘super stocks’ to remarkable places.

“I call these unique investments “super stocks” because they do what financial theory says is impossible:

“They can deliver super-high returns with a very low level of risk, no matter the market conditions… even when other investments are crashing.

“Worried about losing money in stocks?

“Think another recession is looming?

“But these ‘super stocks’ almost never lose money across multi-year stretches… will outperform the market (by a mile)… and, incredibly, offer vastly less risk than the stock market.”

They give two examples of this huge potential from Berkshire Hathaway’s past, though they don’t actually identify either “secret” company — so we can tell you that their two examples are See’s Candy, which Berkshire bought from the founding family in 1972 for $25 million, only to see it deliver more than $2 billion in pre-tax profits over the ensuing (almost) 50 years… and Coca Cola (KO), which Buffett started buying for Berkshire’s portfolio in 1988. Both are brand-based consumer product stocks that provide non-essential low-cost products that are beloved (and to some degree addictive), but have been consistent profit generators for decades. And neither one of them looked really “cheap” at the time Buffett made the purchase.

So those are the kinds of ideas they’re talking about. For our purposes, though, what intrigues is that they hint at another unnamed stock that falls into this “Super Stock” category… so let’s dig in and see if we can name that one, shall we?

Here are our first clues…

“This company is one of the great American success stories. Its first store opened in 1979. By 1983, it had its 100th location.

“Over the past 30 years, this company has never had an annual decline in revenues. Its sales rose during the bursting of the tech bubble, the global financial crisis, and the European sovereign debt crisis. In other words, the company is ‘crisis proof.'”

OK, so it’s been around for a long time and it’s a retailer of some kind, with a steady business. What else?

“The company has a streamlined business with wide margins. It also has significant competitive advantages.

“In fact, when our screen discovered this stock, I was convinced it was too good to be true. It’s THAT good.”

So what is it? Thinkolator sez this is all hinting at AutoZone (AZO)

And whaddya know, that’s not a brand new idea from Stansberry — in fact, they were hinting at this is a “Magic Stock” instead of a “Super Stock” back in 2016, teasing us that AutoZone at the time was one of their best “Government-Proof, Inflation-Proof, Crisis-Proof, Bear-Market Proof ‘Magic Stocks.'”

That was not a particularly great time to be buying AutoZone, in retrospect — it was relatively expensive, and the sector hit a rough patch in 2017, so it has returned only about 20% since that “magic stock” call (versus 40% for the S&P500), which you can see here if you prefer charts: 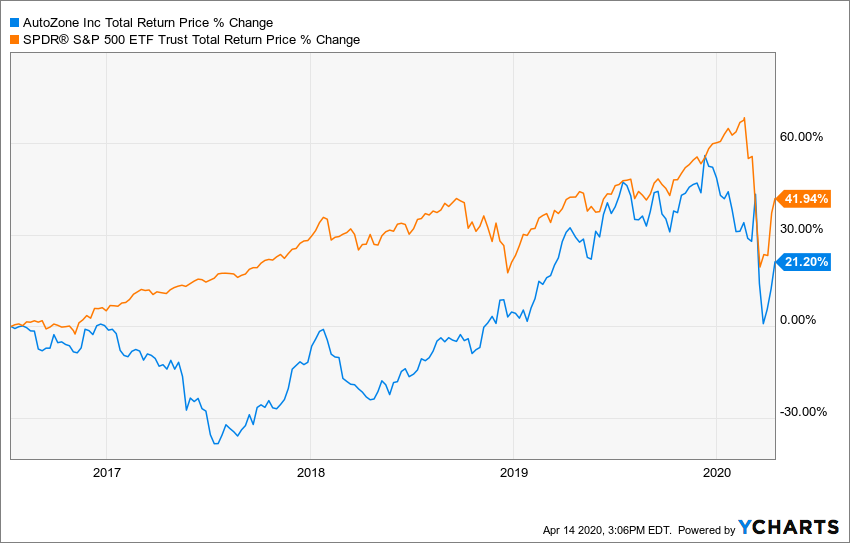 And in the short term this year, with the coronavirus collapse, it has not been any more resilient or less volatile than the overall market, so the “magic” might be in question there on any given day.

But still, AutoZone has indeed been a value investor’s dream — they’ve chugged along with steady performance for decades as the store base has grown, they’ve kept margins pretty solid, and they’ve essentially put all of their cash from operations into share buybacks for 30 years, creating a buyback machine that has shrunk the share count to a degree that is downright Singletonian (referring to Harry Singleton, who directed Teledyne to buy back more than 80% of its shares over a few decades starting in the 1960s, creating incredible reward for shareholders and giving generations of MBA students something to talk about at their cocktail parties).

So AutoZone has been a favorite of stockpickers for decades, and Stansberry has certainly followed it for years — Stansberry’s newer associate Whitney Tilson posted a free piece on that impressive history for AZO over the winter as well, in case you want to read a bit more on that.

But what’s the story now? Other than “AZO is down along with everything else?”

Well, the valuation looks a lot better than it did in 2016… profit margins have inched higher, and net income has risen by about 30%, but those continuing share buybacks mean that earnings per share have grown 50%, while the share price has only gone up about 21%, so while the stock was benefitting some from “multiple expansion” a few years ago, it is now suffering a little from “multiple compression” — the earnings have risen, but people are willing to pay a little less for those earnings.

Right now, the reasons for the stock falling are obvious — the company pulled down some of their credit lines during the worst of the market in March, increasing financial flexibility, and also paused their stock buyback at the same time. Their stores are generally still open for curbside pickup of parts and some limited access to tools and support, since auto parts and repair are “essential” businesses, but the traffic and revenue is obviously dramatically reduced from what it would look like in a non-COVID world. And people are driving a lot less, so the incremental wear-and-tear that spurs parts purchases will be lower for at least a little while.

The business of selling auto parts and supporting do-it-yourself folks in auto repair has been relatively recession-resistant over the years — when people are out of work, they still have to change their oil or their wiper blades, but they might be willing to do it themselves to save $20, and they also generally drive their cars for longer, and older cars need more maintenance and parts. That doesn’t mean the business grows or thrives all the time, though, just that it’s not perhaps as subject to economic cycles as auto dealers and manufacturers or other folks in similar businesses.

O’Reilly (ORLY) and Advanced Auto Parts (AAP) are the most comparable companies, and O’Reilly is particularly the one that is most often mentioned as a strong alternative to AZO — it has shown stronger growth in revenue and earnings as they’ve expanded a bit more aggressively in recent years, and ORLY has also bought back slightly more shares than AZO over the past three years (26.5% vs. 25%). So while AZO is arguably the more favored long-term play, and the one that value investors more commonly drift toward, ORLY has been a very similar performer on the fundamentals and has been a much stronger stock in the past five years. This year to date, AZO and ORLY have essentially been identical investments, but over the past few years we’ve seen that when two similarly high-quality companies are in the same business and doing almost the same thing, the one with the better revenue growth often gets a little bit more of the benefit of the doubt from investors.

I’m no expert on auto parts stores or on which one might be a better business, both have provided phenomenal long-term returns for investors who bought the shares over the past 20 years, with ORLY having the edge, and both have clobbered the average returns of the S&P 500. I wouldn’t be shocked if they continue to outperform, and both are still small enough to grow and even increase their store base a little more (AZO is actually a little smaller than ORLY now, the market caps are $23 billion and $26 billion, though has more stores — 6,003 for AZO vs. 5,219 for ORLY). AZO is a little bit cheaper on most metrics than its larger competitor, but I’d probably give the edge to ORLY given its stronger revenue growth and slightly smaller debt burden. You might reasonably decide the other way, particularly if you prefer the potential of coastal markets to mid-America (AZO is a little stronger on the coasts), but I expect both will probably hold up pretty well and the current valuations are substantially lower than they have been for the past decade.

That said, it wouldn’t be shocking if a further coronavirus shutdown or slowdown really destroys their revenue for more than a couple months, so it’s entirely possible that the stocks have not seen the “bottom” — that’s true of all retailers, and while these folks are not as risky as many, it’s important to keep that risk in the back of your mind as you consider these kinds of stocks in the short term. A few years from now, it probably won’t matter… but that doesn’t mean they’ll be easy years.

So that’s your “Super Stock” for the day… whaddya think? Ready to jump on AutoZone, prefer O’Reilly, or think they’re both unappealing? Let us know with a comment below. Thanks for reading!

Disclosure: Of the companies mentioned above I currently own shares in Berkshire Hathaway. I will not trade in any covered stock for at least three days, per Stock Gumshoe’s trading rules.

I’ve owned lots of those “magic” stocks. They made my money disappear right before my eyes.