What's "midwestern company" has the technology that's being teased by Profits Unlimited as "More Important Than Every Drug, Vaccination and Medical Device ... COMBINED?"

Paul Mampilly is out with a teaser pitch for his Profits Unlimited newsletter from Banyan Hill, which is the entry-level ($97/yr) stock picking letter for that publisher (which used to be called the Sovereign Society). I first covered this for the Irregulars last summer, but we’re still getting a lot of questions so we opened the article up for everyone.

Most of what follows originally appeared in the Friday File on August 18, 2017, though I’ve added a few updates.

So… what’s he using as bait to fish for our subscription dollars? He says he has identified “The Company Leading the Precision Medicine Revolution” … and that this will be a huge winner as it captures more and more of the health care market.

Let’s check our clues… this is how Mampilly gets our attention:

“The Greatest Medical Breakthrough In History

“More Important Than Every Drug, Vaccination and Medical Device … COMBINED!

“Experts Declare This Is ‘A Revolutionary Approach to Tackling Disease’ That Will Completely ‘Change the Game’ and Ignite ‘A Health Revolution.'”

And these are the hints he throws out to tantalize us:

“A mid-Western company is on the precipice of the greatest medical breakthrough in the history of mankind….

“In fact, this new method will make diseases that were once considered “untreatable” or perhaps even “death sentences” … things of the past.”

“Imagine looking at a person’s DNA, that person’s blueprint, and being able to design a medicine to fit that person’s specific genetic makeup … the same way you can custom tailor a suit to fit an individual … to prevent a disease from ever developing.

“If that were possible … chronic diseases like arthritis, Alzheimer’s, diabetes, heart disease, Parkinson’s … could be wiped out simply by looking at a person’s DNA.

“Well, this is where we are in history.

“The impossible is now possible, thanks in part to this $1.5 billion Mid-Western company….

OK, but there are lots of companies that are involved with what they would call “precision medicine,” whether that means doing the actual genetic testing or building machines that enable that testing, or marketing specific tests, or customizing treatments. It’s a broad area. Anything else about this specific company?

Not much… there are lots of stories of success of “precision medicine,” none of which have much in common when it comes to the actual treatment or drug that the person received, and none of which are publicly associated with a particular testing regimen or company that I’ve seen. At least one of the stories is pulled from the (Obama) White House’s “precision medicine initiative” page, another comes from the City of Hope National Medical Center folks. They’re great stories, and they buttress the powerful pitch for precision medicine just fine… but they’re not about one company.

So what else do we get that hints at this company? Here are our other hints:

“Formed in the early 1990s, this Mid-Western-based company’s CEO is a 25-year biotech pioneer, and he’s using his industry contacts to bring some of the top scientific minds in the world to work in these hilltop facilities…”

“It is leading the industry in molecular diagnostic DNA sequencing to assess whether a person will develop a disease and to determine which drug therapy a person will best respond to.

“More specifically, this company’s sequencing targets various forms of cancer, from ovarian to breast to lung to uterine to prostate, and rheumatoid arthritis.”

So who is it? Well, thanks to good ol’ Google Earth I can confirm with certainty that this “mid-western hilltop” is actually in Utah, on the outer fringe of Salt Lake City, and the company is Myriad Genetis (MYGN). Here’s my picture that I grabbed from Google, in case you’re looking for confirmation as you compare it to the photo in Mampilly’s ad: 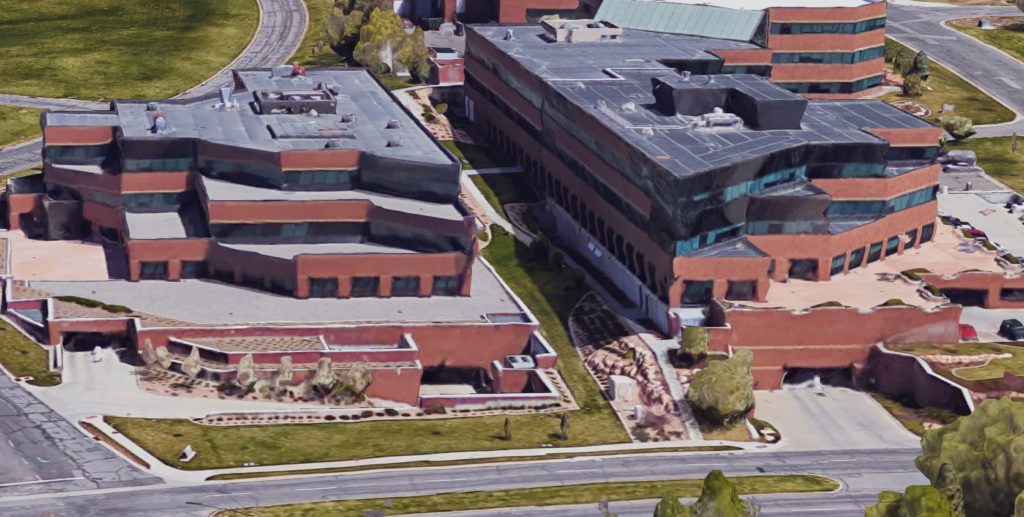 Myriad Genetics is indeed a “personalized medicine” and diagnostics company, they make their money by selling and processing tests that check for cancer risk, or that identify specific cancer variants and predict disease progressions and treatment efficacy. They do have non-cancer testing programs as well, but it’s largely cancer testing that drives revenue now… and, indeed, the vast majority of their revenue still comes from what they call “hereditary cancer screening,” mostly in breast and colon cancer so far, where their tests help to identify people who have mutations that dramatically increase their risk (and, importantly, where there are early-stage interventions that can reduce that risk if p