What does Navellier say that "Will set Warren Buffett's Hair on Fire?"

… and in order to convince you to subscribe, he’s dropping some hints to whet your appetite for these growth stories.

So we’ll see what he’s hinting at, figure out what the stocks are, and then you can think for yourself. If you want to subscribe to Ultimate Growth after that, well, be my guest… but don’t ever subscribe to a newsletter just to learn about a “secret stock.” Not when your friendly neighborhood Gumshoe is on the case to sniff out those secrets for you.

Oh, and in case you’re extra-motivated by the “only five hours left” pitch about the “sale price” for the newsletter… don’t get too excited, not many of the high-priced newsletters actually get sold at retail prices very often, they get put “on sale” all the time… when Navellier was pitching Ultimate Growth last October it was being offered at $2,800 a year, then in April he offered it at $1,695/year, and now it’s $1,595. Deflation: Another reason to put off purchases.

And in case you’re wondering, the three teaser picks he pitched last October for this service are not doing so good: LCI Industries (LCII, which is the new name and ticker for Drew Industries, formerly DW) is up about 4% as of now, DRDGold (DRD) is down 37%, and The Meet Group (formerly MeetMe, ticker MEET) is down about 6%, all while the broad market is up about 15%. The more recent April picks were more successful, at least so far, with Health Insurance (HIIQ) up about 40% in two months and Ubiquiti Networks (UBNT) staying pretty close to the market’s performance with a 1% drop (the S&P 500 is up 3.5%).

So hopefully that’s a little splash of cold water that shakes away some of the “must get in today!” urge that the copywriters are so skilled at manufacturing in our brains… what, then, is Navellier’s pitch today?

Well, the big picture is summed up pretty well by this little excerpt from the ad:

“China stocks just pulled back to a 7-month low thanks to a surprise credit downgrade and a crackdown on China’s shadow banking industry.

“As I told you right from the start, I simply don’t care about possible long-term issues with China’s debt or regulations when it comes to the stocks I’m buying today.

“We won’t still own any of the stocks I’m buying today eighteen months from now. We’ll have made our money and walked away long before these problems might come home to roost.”

OK, so the Shanghai Composite Index did bump down to 7-month lows a couple times in May, bouncing back a little bit each time, though the chart of Chinese markets looks like a flat line over the past year and a half or so when compared with the wild upheaval of 2015. It really depends on what you mean by “China stocks,” though — Chinese large cap stocks that trade internationally have done just fine this year, as represented by the FXI ETF, and the A Shares ETFs in the US (representing domestically traded Chinese stocks, including those in Shanghai) have also done better than the Shanghai Index — they tend to move at roughly the same time and are driven by the same general forces, but they don’t all react the same… this is what the chart looks like for the Shanghai Index (red), Chna Large Cap ETF (FXI, blue) and the Deutsche Harvest China A Shares ETF (ASHR) over the past year: 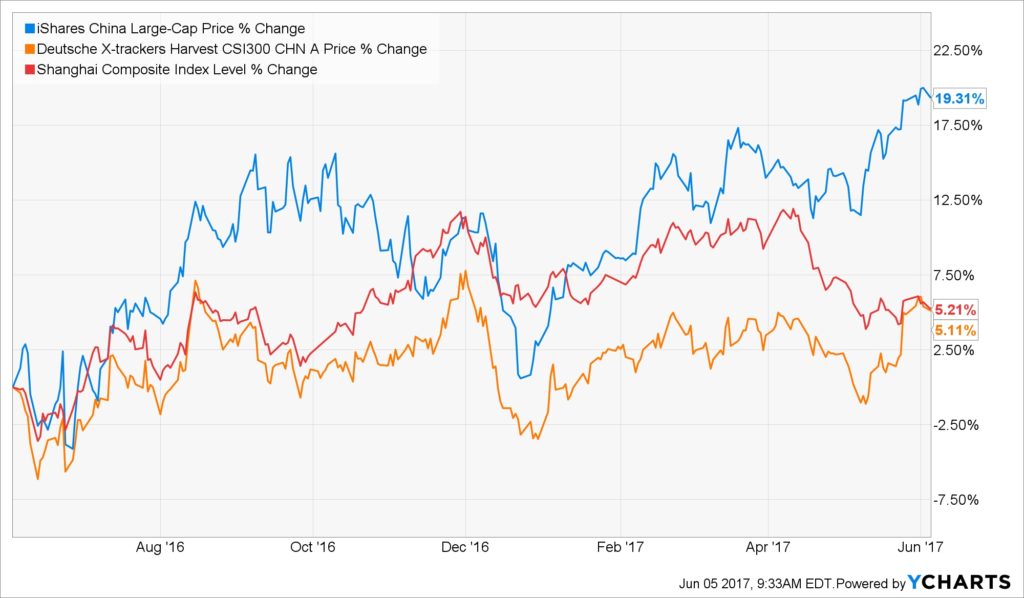 And this is what the chart looks like going back five years, to give you some perspective: