Leeb says, “At $2 a Share, Our Hero Company is an Absolute Steal Right Now”

Is this secret supply of "Catalyst 27-29" going to make us all rich?

Stephen Leeb is out with a new teaser pitch for his Real World Investing, and it’s pretty typical of the “high end” letters — he promises access to a secret stock that has an extraordinary asset that no one knows about… and he’ll give you the info for your $1,495 subscription payment. With no refunds, even if you find the newsletter worthless (remember, you know nothing about this letter… only that he’s promising one idea that is making you drool with greed) — the only guarantee is one that is all-too-typical these days: if he doesn’t make you buckets of money, he’ll “work for free” and give you another year… which I like to call the “If you don’t like it, I’ll give you more of it!” guarantee.

This time, the tantalizing stock is this “Hero Company” that Leeb says is going to make a fortune because it can produce critical strategic metals here in the United States… so let’s get a taste of the ad:

“Over the decades, the U.S. government has allowed us to become more and more dependent upon countries like China and Russia for the materials we need for our very survival.

“That’s right, we rely upon our greatest rivals for our supplies of rare earth elements as well as a host of other materials, including Catalyst 27-29.”

Huh? Catalyst 27-29? What the heck is that? Here, again, we have a secret to be revealed only to those who shell out their $1,495 (or, of course, those who keep reading here for a couple more minutes).

More from the spiel:

“… this company is on the verge of becoming a ‘hero’ to many industries… making its rare resources even more valuable….

“We import massive quantities of materials essential to the development of our defense industry, alternative energies, computers, cell phones, and other electronic devices.

“Along with U.S. defense contractors that build our nation’s weaponry…

“Practically have to go hat in hand begging China and other nations for the rare resources we need to keep our country going strong.”

OK, that’s a common refrain when people talk about natural resources — particularly things like rare earth metals or cobalt or the rarer stuff, but also pretty much anything except oil and natural gas, where US supplies are abundant and production high.

“Catalyst 27-29 is a critical building block for the military. Just look at where it’s used:

“Because it’s flexible and withstands impact, it’s used in the body armor that protects our troops.

Huh, so… that doesn’t narrow it down to anything particularly exotic, at least as far as a non-expert like me can determine. Another track, let’s look for the company he’s teasing first, then that’ll tell us what Catalyst 27-29 is.

Leeb shows part of a map of this company’s deposits… and goes on to talk about the resources they’ve found:

“And management just confirmed they’ve found another deposit that’s triple the size of the first one… for an extra 6 billion pounds of Catalyst 27-29.”

“You see, the company’s completed several studies of their 350,000 acres. They’ve identified about 4 million tons of mineral reserves.

“But that’s just the tip of the iceberg. They estimate their sites could have total mineral reserves of about 43 million tons.”

OK, so we’re getting closer. What else has Leeb excited?

He notes that the Trump administration’s focus on streamlining the regulatory process for mining and energy is going to help:

“Trump’s Executive Order makes it much easier for our tiny company to do business.

“You see, as a mining and exploration company, it’s been hamstrung by a permitting process that can take seven to ten years to complete….

“He’s ordered a streamlined process that will help get our mining company up and running with the production of Catalyst 27-29 in record time.

“The significance of this news wasn’t lost on a select group of investors.

“Like me, they’re among the few people who’ve been monitoring developments in the hidden bull market in resources.

“Almost immediately after Trump’s announcement, they scooped up a boatload of our tiny stock’s shares.

“Sending it soaring from a mere 70 cents-a-share to $2 in just a few months.

“Add it all up and the stock has nearly QUADRUPLED in the short time I’ve been following it….” 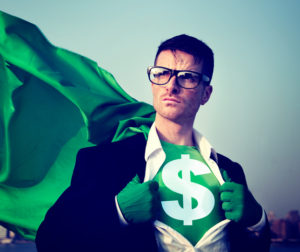 According to the chart he shows, that’s since the summer of 2015, and it has gone from about 50 cents to $2 in that time.

Leeb also cites a couple major investors who have gotten on board — he says the Baupost Group has a large stake in the company, almost 10%, and that South32, an Australian company, has 12.5%. So those are good clues.

And he notes that there’s a catalyst of sorts:

“But that won’t last for long. Not after word gets out about this wealth-building opportunity.

“Which could happen as soon as September 28th. That’s a week after management attends a meeting with some of the biggest investors in the industry.

“And in the past when big meetings like this occur, the share price jumps the following week.”

OK, so that would mean this meeting happened within the past few days.

Which means we’ve got plenty of clues, I’m sure — let me just get the ol’ Thinkolator fired up.

Just a minute, running a little low on fuel. There we go, the tarp is off and a few quick pulls on the starter get us going… not much longer now… aha! We’ve got our answer: Stephen Leeb is touting Trilogy Metals (TMQ).

And that “Catalyst 27-29?” There’s a reason the clues didn’t point us at something exotic or mysterious: It’s copper.

Which, yes, is in demand for lots of things, from military equipment to electric cars to pretty much everything required for modern life… but it’s not particularly rare or strategically critical at the moment — the US is already the fourth largest copper producer in the world, after Chile, China and Peru, and copper pricing and demand might be driven by China to a meaningful degree, but China is far from having a “lock” on the market like they might with rare earth metals, and a lot of copper comes from countries which are relatively friendly.

So what’s the story? Trilogy has found two substantial deposits of copper, zinc and precious metals (and also a little cobalt and lead) in Alaska. They’re in the process of trying to permit the first one, which they call Arctic, and that one has a prefeasibility study that indicates it’ll have a capital cost of about $900 million but pay for itself in just two years, with an after-tax net present value (at an 8% discount rate) of $1.4 billion. They may not have an easy time raising the money to build the mine, of course, since everyone’s looking for money right now, but at first glance it doesn’t look like a super-risky project — other than the concern that the cost might blow out to some much higher level.

Much seems to rest on the development of a 200-mile road to connect this mining district to the Dalton Highway and then to Fairbanks, where they can transport ore by rail to Anchorage and get access to an ice-free port. That road, which they call the Ambler Mining District Industrial Access Project (AMDIAP), is in the permitting process now and could perhaps be built by 2022 or so. The Arctic mine is anticipated, at least per Trilogy’s Investor Presentation, to begin the permitting process sometime in the next year or so, and the permitting will probably take a year or so — they aren’t using federal land, so they think the process will be easier with mostly local and state approvals needed, and they have a partnership with NANA, the Alaska native group that controls part of the land. They think they’ll have a bankable feasibility study “by 2020.”

The newer discovery is the Bornite Project nearby, which is indicated to have more copper, and their meaningful amount (though still relatively small) of cobalt. That’s nowhere near permitting, they’re still drilling and exploring.

And yes, Baupost and South32 are both substantial investors, and both put capital in during the last raise. John Paulson’s group is also a substantial shareholder, and Thomas Kaplan’s Electrum Group is the largest shareholder at about 20% (Kaplan has been a major natural resources investor for 25 years or so — he’s also the Chair of NovaGold (NG), which is half owner of the huge and challenging Alaska project Donlin Gold… and coincidentally, Leeb also touted NovaGold as a “$20,000 gold” play last year).

So… will things work out well for Trilogy, which used to be called NovaCopper? I have no idea… they did present at the Precious Metals Summit at Beaver Creek late last week, but they didn’t have any huge news to report, and that hasn’t so far had any impact on the share price. It’s a small company (market cap about $250 million), with probably enough cash to do much of the permitting work (they had $37 million on the books as of the last report)… and the stock should be quite levered both to copper and to the success or challenges they find in the permitting process and in finding mine financing.

They are in a lot better shape than many miners, they’re well capitalized and have a core group of institutional investors who could all pony up millions more if they feel so inclined, but that probably won’t matter much if copper falls to $2 a pound again or they hit some sort of meaningful hiccup in the permitting process.

So… I’m not buying shares of this one at the moment, but I hadn’t heard of it before this morning… and anyway, it’s your money so what you think is the key — would you like a taste of Catalyst 27-29? Have other favored copper (or zinc, or cobalt) projects that make more sense to you? Dissuaded from all mining investment entirely? Let us know with a comment below.

And, of course, if you’ve ever subscribed to Leeb’s Real World Investing, please do click here to let your fellow investors know what you thought of the letter.