I’m updating this quickie teaser solution for you today because we’re getting a LOT of questions about it over the past few days. The ad originally ran in mid-January and we published the first version of this article on January 20, but it is still circulating widely. The ad seems identical to the one we covered in January, but I’ve updated this article for you today.

The pitch is from Stephen Leeb, it’s an ad for his Real World Investing ($1,495/yr, no refunds), and it’s another mining story… this is the intro:

And the catalyst for all of these riches, apparently, is that they’re about to build a road to make this huge “treasure trove” accessible:

“As you’ve seen, a road is being planned in Alaska to reach a massive deposit of copper — a substance more important to our modern way of life than gold, silver, platinum, or lithium.

“After five years of prep work, endless meetings, and legal wrangling, the wheels are finally in motion to unlock $26 billion in trapped wealth and bring it to the outside world.

“And one small company is sitting on the motherlode of it all.

“And it’s all coming to a head in the coming weeks.”

And the latest versions of the ad really push the “insiders are buying” spiel… here’s what an email I got noted on Wednesday:

“So when the people running this company started betting millions of their own personal money on a project that’s been in the works since the 1980s, it got my attention.

“The man who led the firm for 15 years has bought 2.8 million shares – currently worth $5.6 million. And he bought them all on his own. They weren’t gifted to him as a stock option or bonus.

“The new CEO is being paid entirely in company stock. He must be awfully upbeat about his company’s future.

“The VP has been buying shares, too. He says he feels like selling his house to buy more.”

So what’s the story? You can see the rest of the ad here if you like, but we’ll just jump to our answer.

That $312,400 is not, of course, a likely outcome — that’s what Leeb describes as one “scenario” that could have the stock spiking to almost $50 a share from the current $2ish. I suppose it’s not impossible, but don’t count your chickens.

What’s being teased here is Trilogy Metals (TMQ in both Toronto and NY) and its projects in the Ambler Mining District in Alaska that htey call the Upper Kobuk Mineral Projects.

The name might not sound familiar, but Trilogy used to be called NovaCopper and was spun out of NovaGold about eight years ago. Stephen Leeb, in case you’re curious, has been a big fan of these folks for many years and was teasing Novagold as a favorite in the years after the global financial crisis… so in case you need an extra reason to be cautious, or you haven’t yet seen how challenging the large-scale mining business can be, we’ll note that Novagold, which had two projects they wanted to develop but has now sold one of them in addition to spinning off its founder and its copper project to what is now Trilogy, has spent well over ten years working to develop a major gold mine in Alaska (Donlin Gold is one of the world’s largest potential mines, with a very high average grade), but hasn’t ever actually built anything or generated any revenue in almost 25 years. In fact, Novagold would almost have to double today to get back to the $16 hostile takeover offer they rejected in 2006 from Barrick (ABX), which owns the other half of Donlin Gold.

But that Novagold business is neither here nor there — what’s this Trilogy copper story? Like Novagold’s Donlin, their lead project is a 50/50 joint venture — the copper-focused projects in the Ambler district are owned by a joint venture with South32 (SHTLF), which is a collection of “non-core” projects in the US, Australia and Colombia spun out of BHP Billiton a few years ago but also, importantly, has a lot of revenue and cash to support building more projects (they’re putting up $145 million in cash). They have some strong institutional backing, like Novagold (John Paulson, Electrum, Baupost, etc.).

And the insider details match up, though the tease is misleading — yes, insiders have been buying, with some big spurts of buying last fall, and there have been a few ‘real’ purchases of stock on the open market… but the big transactions for the vast majority of those insider shares look like they were mostly stock option exercises. They didn’t sell all the stock once they exercised the option, so I guess that’s a good sign, but nor have they recently been putting up a lot of money to buy the stock at $2 a share (or even at $1.50).

And, yes, a road is key — there are other mines in northwest Alaska, like the Red Dog Mine, but they’re close enough to the ocean that they don’t need massive roads — the Ambler Mining District is more isolated, and the next step is to get a road permitted and built that could connect the district to the highway and then to the railroad for shipping ore out of the port at Anchorage. There are a couple options for roads, depending on whether or not they have to go around some National Park lands, and the expectation is that a permitting decision on the road will come quite soon, perhaps in the next few months — there’s a good summary here from the Frontiersman if you’re interested.

Assuming that permit is granted and they move forward to begin building the road, which is no small feat, then Trilogy enters into permitting — one big Federal permit and a bunch of state ones, and the permitting process, they expect, will take about three years. After that they’ll have to have raised the larger chunk of money for mine construction, which presumably won’t be cheap in this remote area at the edge of the arctic circle, and they say the engineering and construction of the mine will likely take about three years… so this is likely to be a permitting and exploration-driven story for the next five or six years, moving based on success or delays in the permitting or financing process and on new discoveries or assessments they publish along the way as a result of the ongoing drilling exploration.

The prefeasibility highlights for the Arctic project that they post in their latest investor presentation sound impressive — a huge open pit with 5% copper equivalent grades, including meaningful amounts of zinc, lead, gold and silver, and they say they calculate the post-tax net present value at $1.4 billion, with a 33% internal rate of return. And there’s also some potential in their second location (Bornite, which is nearby), which looks like it’s another meaningful copper cache and also hosts a substantial amount of cobalt.

So that all sounds lovely, a $350 million company like Trilogy owning even half of that $1.4 billion “value” — but, of course, that’s a prefeasibility study and there are a lot of variables that could change meaningfully in the 5-10 years it would take to actually begin producing copper from Arctic (and that $350 million valuation was on January 20… it’s back down to $210 million today).

And, of course, even going just by the prefeasibility study. the guess is that the initial capital cost of building the project will be almost $800 million, which is easily justified if the production and pricing works out as they imagine (they anticipate $450 million in annual free cash flow from the mine, so “payback” is only two years), but it’s still a LOT of money and a long period of time before this might become a real business. And the next update to their projections, the “feasibility study for the arctic project,” could shake up that expectation considerably (good or bad), is now expected sometime in the second quarter.

So yes, a road will be a big deal in this part of Alaska, and they need it to move forward with the project… but there are lots of other permitting and financing steps along the way, so investors today will have to hope both that all of the permitting goes well and that copper prices are favorable over the next ten years (and, particularly, that copper prices are rising happily at the time that they go looking for mine financing).

So sure, things could go very well with good permitting response, a fast and successful construction period, and strong copper prices over the next five years… but don’t get too confident about any of that being guaranteed. All you have to do is look at the stock price since we first posted this teaser solution in January to see how the market treats copper companies and early-stage mining projects during times of recession fear — it was right around $2.50 on January 20, and today it’s down to $1.50. That’s leverage both to “fear” and to the copper price — the spot price of copper is down thanks to China’s slowdown, from $2.75 to about $2.55/lb during that time, so that’s about a 7% decline and copper is still pretty close to where it was six months ago. The stock is down by 40%… whether that’s appealing or terrifying to you will have to be your call. Here’s the chart going back a year so you can see the tendency these shares have had, over time, to be levered to relatively small moves in copper prices (the blue line is Trilogy shares, the orange one monthly copper prices). 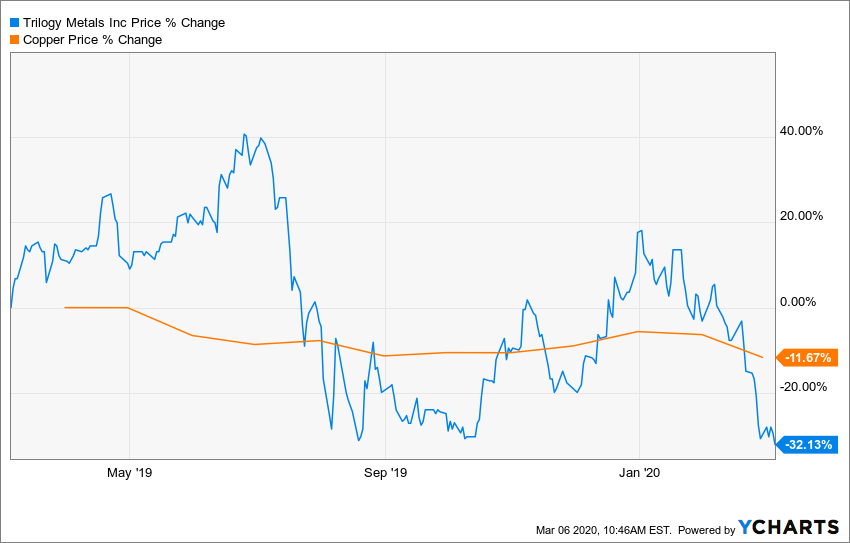 This isn’t the kind of thing I like to invest in very often, building big mines over long periods of time, but that doesn’t mean it can’t work out — if you’ve got an opinion about Trilogy or these Ambler projects in Alaska, please let us know with a comment below. I’ve kept the original comments from January attached here, so you can see how your fellow readers were feeling about it at $2.50 and maybe get a little additional perspective.

P.S. And yes, I thought this one sounded a little bit familiar — so I went back and checked, and it turns out that this “$2 hero company” was also teased by Leeb as an absolute steal in September of 2018, when it was in fact just about at $2 a share… with the story at that time spun largely around the potential that they might also eventually produce cobalt.

Leeb has been promoting physical since 2011 back when it hit $48/oz. I will pass on anything that soothsayer is promoting.