The hook of Tyler Laundon’s ad for his Cabot Small-Cap Confidential newsletter is a 1,290% gain over the next three years…

“When your grandchildren ask you how you turned nearly every $10,000 you invested in 2018 into $129,000 in just three years, I want you to be able to say, quite simply: Cabot Small-Cap Confidential.”

And if you’ve got visions of returns like that dancing in your head, and the image of a room full of grandchildren cheering you on, well, how can you possibly be expected to think rationally about an idea?

How about buying a subscription to a $1,400 newsletter? (“on sale!” for $950 at the moment, but you’ll see that $1,400 charge at renewal time)… Would that make you think more rationally about it? Not if you’re most folks — most people spend all their energy after a major purchase trying to justify the price they paid, and to make themselves feel good about what they just bought… your brain knows that thoughts like, “boy that was a waste of money” don’t feel good, and so it tries like heck to avoid them — which might take the form of believing the pitch so fervently that you put lots of money into the stock they tease.

And, of course, the first thing you read about a stock is the most powerful — that tends to form the center around which all of your other analysis revolves, so if you start out with, “I’m gonna make 12X my money,” then it’s pretty hard for even a starkly negative bit of research to make a dent in your expectations or alter your view.

So what does the Gumshoe prescribe? Answers first, then subscribe. If you feel like subscribing and find it to be a reasonable expense, that is. Don’t ever subscribe to a newsletter just to find out a “secret” idea, but visit your friendly Stock Gumshoe, learn that secret, then make your own call. That doesn’t guarantee success, either, but it’s a lot cheaper and it hopefully starts you on your analysis with a somewhat more balanced playing field. Plus, it’s more fun.

Ready? OK, let’s check out the clues and solve your puzzle… what does Laundon say about this secret stock? Here’s another taste of the ad:

“Once you see my complete profit profile, you’ll quickly agree … This Could Be an Easier Double Than Amazon….

“It’s been doing just that for the past 16 years.”

OK, so what specifically does the company do?

“The software platform powers apps that help organizations and government entities keep people safe and businesses running. Customers buy the software to lower the risks to human life and the cost of business downtime due to terrorist attacks, active shooter situations, severe weather events, IT outages and cyber-attacks.”

Huh? How does software do that?

Apparently it “collects, aggregates and analyzes data” for threat assessment, and can communicate with people about that threat… including receiving responses from individuals.

He says that the company has sent out “1.4 billion tailored messages” and that they have a lot of notable customers…

And that’s about all we get by way of clues… so what’s the stock? The Mighty, Mighty Thinkolator had to chew on this one for a few minutes, but it’s still early in the day so the neighbors weren’t too irritated by the noise… and thankfully we got a nice, clean answer out the other end: This is Everbridge (EVBG). 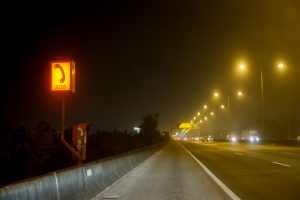 It’s an interesting and pretty sticky business, though, if they manage to take control of the market without any meaningful competition — mostly because their core customers are presumably very large businesses and governments who need to be able to reach people quickly with emergency alerts and status updates, and often need to do so within just a specific geographic area (for things like power outages, public safety alerts, natural disasters, etc.).

You can see the company’s basic info (from their perspective, of course) in their investor presentation that they made on their analyst day over the summer — the company has not changed dramatically since then — but the basic gist of “what they do” is this, pulled from their website:

“Everbridge, Inc. (NASDAQ: EVBG) is a global software company that provides enterprise software applications that automate and accelerate organizations’ operational response to critical events in order to keep people safe and businesses running faster. During public safety threats such as active shooter situations, terrorist attacks or severe weather conditions, as well as critical business events such as IT outages, cyber-attacks or other incidents such as product recalls or supply-chain interruptions, over 4,200 global customers rely on the company’s SaaS-based Critical Event Management platform to quickly and reliably aggregate and assess threat data, locate people at risk and responders able to assist, automate the execution of pre-defined communications processes, and track progress on executing response plans. The company’s platform sent over 2 billion messages in 2017 and offers the ability to reach more than 200 countries and territories with secure delivery to over 100 different communication devices. The company’s critical communications and enterprise safety applications include Mass Notification and Incident Communications, Safety Connection™, IT Alerting, Visual Command Center®, Crisis Commander®