What’s Lombardi teasing as “The Tiny $1 Marijuana Stock Next to Be Bought Out for Big Dollars?”

What's being teased by George Leong for his Red-Hot Small-Caps?

Marijuana speculation is all the rage these days, with most punters focused on the first legal sales of recreational marijuana that will be taking place in Canada tomorrow and the crazy stock market gyrations of the larger Canadian growers like Canopy Growth and Aurora and Tilray and their ilk…

… and what makes some of those pot stocks seem more rational and “real” are the buyouts and investments from more mainstream companies who want to at least dip a toe into the cannabis space, led by Constellation Brands and its large investment in Canopy Growth, so we are all primed to salivate when we hear hints about the next little marijuana stock to be “bought out.”

And that’s why we see the ads, of course, because ad copywriters know damn well what makes us salivate… so that’s your backstory for today’s de-teaserification, this time we’re digging in to a George Leong pitch for his Red-Hot Small-Caps service published by Lombardi, and he’s talking up a “tiny $1 marijuana stock” that he thinks will make you buckets of money in short order.

Thankfully, Leong drops some clues in his pitch, so we can shovel those into the gaping maw of the Thinkolator and chew ’em up a bit, which usually gives us a nice, clean answer for your careful consideration. And since you didn’t pay for it, well, you’ll probably be able to think more rationally about it (if you’re like most people, once you buy something, your brain will do almost anything to convince you that purchase was a brilliant decision… even telling you to invest more than you can afford into a wild speculation).

Lombardi’s newsletters also often use a pretty aggressive “ramp up” pricing system that takes advantage of the tendency we all have to “stick with it” once we’ve tried something out… especially since canceling takes some effort. They’re selling this subscription to Red-Hot Small-Caps for $4 for 30 days, after which it renews at $93 for six months, and then after that it renews for $295/year into perpetuity if you don’t cancel. Perhaps you’ll love this newsletter, I don’t know, but don’t sign up just to learn about this ‘secret’ stock — we’ll figure that out for you, then you can think it over, take your time, and make your own call without any sales pressure.

And with that preamble, let’s move on to the clues… here’s how they tease us about this stock:

“Over the last few months, a tiny marijuana stock has quietly been making a series of very important announcements and financial moves.

“And if you’ve got a little cash set aside for just the right opportunity, then this stock may be the one you’ve been waiting for.”

There’s no date on the ad, but I got it direct from Lombardi several times today, and have had a few readers forward it along as well.

Any specific clues we can use?

“One particular company happens to be in the right place at just the right time — with marijuana grow operations kicking into gear in B.C., California and Nevada just as the recreational market takes off.

“And right now, this tiny company is selling for only $1 per share.”

OK, so that’s a good start. What else?

“The California operation alone could be a gold mine….

“This company’s initial California operation includes two greenhouses on 20 acres of land with the capacity for an additional 98 greenhouses.

“Its initial test crop in that state produced 300 pounds of marijuana, 50% higher than management had forecast….

“If the company exercises all its options and runs these 98 greenhouses over the next few years, by my estimates, annual revenues could be in excess of $145 million.”

And the Nevada project details are hinted as well…

“In Nevada, the company is securing licensing and property for a 33,500-square-foot facility to be located in the city of Henderson, 15 miles southeast of Las Vegas.

“This will give the company the capacity to produce 5,000 pounds of marijuana per year in the first full year of production — this alone is projected to generate revenue of approximately $10 million.”

And the Canadian project…

“In British Columbia, the company’s initial production is targeted at around 15,400 pounds in the first year for projected revenue of $27 million to $35 million….” 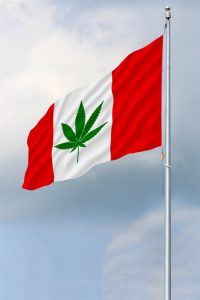 He tosses around some generic numbers about marijuana cultivation, estimating that it will sell for $2,000 a pound and that the growing cost of $600/lb for greenhouse operations means they get $1,400/lb in profits, which adds up quickly at scale — I expect that’s a gross simplification, since we don’t know what the prices will end up being in a few years and there are plenty of non-growing costs for these kinds of companies (there’s a reason why agriculture has been industrialized: Massive scale and capital-intensive operations generate better profits and drive down prices).

But anyway, that’s about it for clues… what’s our little company?

The Thinkolator had to chug for a little while on this one, partly because the data is pretty out-of-date… but it didn’t disappoint, this one must be: Maple Leaf Green World (MGWFF on the OTCQX in the US, MGW on the Neo Exchange in Canada).

I haven’t run across the Neo exchange before — it was started up as a competitor stock exchange in Toronto a few years ago and has some trading in TSX-listed stocks as well, but there are a few stocks whose primary listing is on the NEO — Maple Leaf Green World, as of today, is the most active of those… but with only a few hundred thousand shares traded on either the OTC markets in the US or on that NEO exchange in Canada, it’s not all that active or liquid.

And no, it’s not at a dollar a share… and it’s not up 151% in the past 9 months, but both of those numbers were accurate in late January of this year. Right now, the shares are around 30 cents — not quite at the lowest price it has traded at over the past two years, but pretty close. Maple Leaf Green World currently has a market capitalization of about $43 million, aims to be a medical marijuana grower, and has yet to generate any revenue.

So this appears to be an opportunistic ad, based on pretty old data, trotted out to snare subscribers because marijuana is in the news with the Canadian legalization date coming tomorrow and some more state-level marijuana votes a couple weeks away. No huge surprise there, publishers often haul out and rerun successful ads when they think the headlines will give them a leg up in attracting investor attention, but let’s take a step back and look at what this company actually is and does, and what those teased projects mean.

The stock price data is from early this year, but the details about their core California project are a year older still — that 300 lb test grow of marijuana in their two California greenhouses was in 2016, and they did have 20 acres of land for expansion at that time… they were also looking to build that 33,500 square foot production facility in Nevada, and had already bought the land for it, back in early 2017 when the CEO was interviewed by CEOCFO magazine.

That movement to the Neo Exchange happened about six months ago — prior to that they were listed on the much-more-mainstream Venture exchange in Canada, but they were essentially kicked off the Venture by the tenuous state of legalization in the US, since all marijuana businesses in the US are still technically breaking federal law (that’s apparently why US marijuana companies who list in Canada have recently gone to the Canadian Securities Exchange, which like Neo is very small and not affiliated with the Toronto exchange).

There isn’t a huge amount of detail on the company website, but I went back through their press releases — the actual testing of their California greenhouse production was announced at the end of 2016, and they indicated that the project (with a coop partner) was primed for $900,000 in annual revenue at the rate they anticipated then, with expansion adding nine more greenhouses in 2017 and that Maple Leaf Green World would then be “well on the way to achieving its revenue target of US$10 million for its California joint venture operations.”

They did report that ~$300,000 in revenue at the end of 2016 and beginning of 2017, but not anything after that. The California property is still on the books, but they announced a while back that the partnership with their nonprofit grower