A Cube, a Metal Pole, and an “Absolute Killing”

What's being pitched by Sniper Report as a play on the "new $12 trillion tech race?"

Today I’m taking a look at a Kyle Dennis ad for his Sniper Report ($97/yr), which is published by RagingBull. Haven’t looked at his stuff before, but it seemed to get some reader attention, so… digging right in.

This is what I imagine got most of the dreams of greed ignited:

“I sincerely believe it will be the easiest quadruple of my money in my entire career.

“It all centers around this cube and its connection to this metal pole.”

I didn’t copy over the image for you, but it’s basically a photo of a cellular antenna tower (the “metal pole”) and some kind of packaged microchip (the “cube”).

More from the ad:

“About 75 BILLION devices will center around these two objects. And this technology isn’t something ‘nice to have’. This isn’t a new Facebook, or, some Uber or AirBnb. This is a technology that already exists in a much smaller way—100X smaller—but it’s reached its life cycle.”

And he pitches his stock as a “picks and shovels” idea — though he uses a different metaphor:

“Instead of investing in a horse, you invested in the track and the betting circles.

And apparently this particular cube is essential…

“If you don’t have this cube, your device will not work with the new technology. Without it, you won’t be able to interact with these metal pole-things I showed you before….

“In every single device that runs 5G… and all 5 tech giants are working on adapting products or their platform to the technology… will require this cube to communicate with these metal poles.”

So yes, he’s pitching some kind of chip or part supplier that produces something essential for 5G. More clues?

“Why this cube instead of the pole?

“With an estimated 75 billion devices about to be unleashed on 5G—that’s more than 10 per person on the planet—that’s 75 billion chips needing to communicate. If it costs a company $40 to manufacture a chip—that’s over $3 trillion dollars. If they sell it for a 400% markup or $150 which is relatively standard…that’s $12 trillion dollars in revenues.

“And that’s just for this one small cube. Entire devices need to be re-made. New products in virtual reality and IOT need to be revamped.

“Not to mention, these stinkin’ metal poles I keep showing you. Compared to the 75 billion chips we need, we will an estimated 300,000 of 5G antennas according to CBS News.”

And a few more tidbits…

“Their profits hover under 45%. Their cash flow increased 5X in a mere four years.

“On top of that, they’ve been buying back shares five years in a row. They were even doing that before Trump’s tax cuts.”

And he says that buyback is pretty huge…

“Companies only buyback shares when they are fully confident their stock price is about to explode.”

Uh, that’s not true. That’s what they’re supposed to do, buy back shares when they’re undervalued, but history tells us that companies are no better at telling when their stock is undervalued than anyone else…probably worse, in fact. In practice they generally buy back shares when the price is high and they’re trying to juice per-share earnings growth to keep investors happy…. or when they’re issuing tons of employee stock options and want to buy some of them back to cut the dilution so their earnings per share numbers don’t drop.

“Forbes calls this stock a ‘good value’. And I agree. Within the next year, I expect it’ll quadruple and hand early investors a tidy fortune.”

Next time someone cites Forbes as if it’s still a reliable and edited business magazine, remind yourself that it’s now mostly a blogging and paid promotion network… good piece on that trend from Epsilon Theory here. I have no idea which Forbes article cited this “secret” stock as “good value,” or when, but, of course, you can always find a citation for someone saying that they think pretty much any stock imaginable is a “good value.”

So… what’s the stock? This is our old friend Skyworks Solutions (SWKS), which has indeed spend the past year or so positioning itself more vigorously as a “5G company.”

I stopped out of Skyworks a while back because their revenue and earnings took a hit from the fact that they were (and are) still mostly an iPhone chip supplier, and falling iPhone volumes really hurt them, but they have been clawing back this year.

The big benefit for Skyworks a few years ago, that they had a great product that got included in the iPhone, a huge win for a small company finally making the big time… has become also the biggest risk for the stock more recently. Skyworks gets roughly half of its revenue from Apple these days, and almost all of that is from the iPhone… and as a chip supplier, they don’t care how profitable Apple can remain by raising prices on phones, they only care how many phones are sold, so that has been a consistent fear for Skyworks over the past year or two: Phones are lasting longer, new models are no longer compelling upgrades after one or two years, obsolescence has slowed down, and many people are now happy to hold onto their phone for three or four years or longer.

That trend won’t get endlessly worse, of course, there will be future upgrades at some point that are genuinely compelling… and maybe it will eventually be 5G that spurs the next round of surging iPhone sales. That won’t be this year, we’ll see a few 5G phones introduced, but the networks aren’t there for them yet and the more appealing 5G use cases in this introductory cycle will likely be stationary (base stations for wireless broadband, laptops, etc), so it’s more likely that the mass market for 5G phones doesn’t really start to hit until at least 2020 or 2021, which is also when Apple will probably bring the iPhone into the 5G future.

But the good thing about 5G, as about each advancing iteration of technology, is that it needs more stuff to work. More base stations. More chips in the phones. More filters and antennas and amplifiers to handle the new radio wavelengths. And that’s the kind of stuff that Skyworks makes. 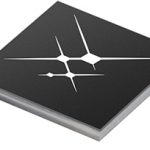 And yes, the little photo of the special cube in the ads is a SkyWorks product — the little techy-looking image on the top is part of the Skyworks logo. I grabbed a similar product image from their website here for you, just in case you’re curious.

Skyworks’ big push is for front-end modules for cellular communications — combinations of chips that combine power amplifiers for multiple bands, switches, and filters to help phones reduce battery draw while also connecting across various bandwidths and networks, from WiFi to 4G to now 5G. I can see how these would be very popular products for developers, particularly as the world of bandwidths they have to deal with expands with the addition of 5G (all new 5G-enabled phones will still need full 4G connections for years, possibly forever), and it might be that their technology is the best (they say it is, at least), but Skyworks is not the only provider and their particular chips do not have to be used by the makers of every phone. Monopolies in semiconductors are extremely rare, and they have probably been built as much by branding (Intel in the 1980s) as they are by actual unique capabilities or patents (though that does come sometimes, with Qualcomm being a great example with their patent dominance in 2G and 3G and, to a lesser degree, 4G). I wouldn’t count on a monopoly for Skyworks.

Which doesn’t mean they can’t do well — the danger is that the stock will probably continue to be driven primarily by sentiment about Apple iPhone development cycles and sales volumes, so the pace of 5G adoption this year will probably not be as important for Skyworks investors as the popularity of whatever next iPhone Apple releases.

“If it costs a company $40 to manufacture a ch