The latest ad pitch from the Stansberry folks, a marketing letter/presentation that’s urging you to subscribe to Stansberry Innovations Report ($49/yr at the moment), tells us that…

So you can leave your subtlety by the back door today.

What is this cybersecurity pioneer? Let’s sift through the ad, which is from editor Christian Olsen, and see what we can find.

‘We Could Lose the Internet’

Which might sound good on any given day, but, of course, pretty much everything we rely on for modern living touches the internet in some way, from bank accounts to health care to transportation to the electric grid, to say nothing of just plain old “sitting on the couch watching TV.”

So what’s this flaw? Olsen doesn’t pinpoint one particular thing, but essentially it’s just that the internet has quickly become far more complicated and far more embedded in our daily lives, while security has so far failed to keep up.

And yes, there was a Donald Trump quote about “closing the internet,” which was used in some of the email versions of this ad I saw – here’s how Olsen notes it:

‘We have to go see Bill Gates and a lot of different people that really understand what’s happening. We have to talk to them about, maybe in certain areas, closing that Internet up in some way.'”

Which is sort of true, but not really at all about cybersecurity — that quote first aired in 2015, about a year before the election, and it was in response to terrorists using the internet for communication and recruitment. He later said similar things in 2017, following a London bombing, but again it was about cutting off the ability of terrorists to use the internet for recruitment. Which I’m sure is still an issue, but not at all the same thing as countering hackers and cyberattacks.

The basic spiel of the ad is that a “new arms race” is underway for cybersecurity, and that it will lead to profits just like past arms races. Here’s a bit more from the ad:

“How high could cyber-security stocks go?

“Years ago, our battles were mainly fought with ships, planes, and missiles.

“And most people don’t know this, but the companies that did all the work to prepare for these old wars have been one of the most reliable… most profitable investments in the world over the past few decades.

“If you don’t believe me, take a look…

“But over the same time period…

And the big picture:

“In fact, if you are worried about the stock market right now… and you want to put some money in a safe, very lucrative investment that could double, triple, or even quadruple in the years to come… there may be no better place….

He also cites Bank of America and J.P. Morgan as two companies spending wildly on cybsersecurity, and specifically includes a BAC job listing that he says “tipped them off” about the technology they were using.

Which isn’t necessarily true, that ad really just asks applicants to be familiar with a dozen or so technologies from a bunch of different companies (Fortinet, Symantec, Checkpoint Systems, Juniper, F5, Cisco, FireEye, Radware, Zscaler, etc. — which is essentially the same as saying “almost every publicly traded cybersecurity company”).

So we’re clearly getting a pitch here to buy some kind of cybersecurity stock… or maybe a bunch of them… more from the ad:

“What you have to understand is, this is a rare situation. It almost doesn’t matter what’s happening in the rest of the economy or the rest of the stock market. The best cyber-security firms are likely to experience tremendous growth, because businesses simply CAN’T OPERATE without their help.”

So, um, which one should we buy? Cybersecurity stocks in general have done pretty well over the past several years, with quite a bit of volatility, which you can see in comparing the Cybsecurity ETF (HACK, in blue) to the S&P 500 and the Nasdaq 100: 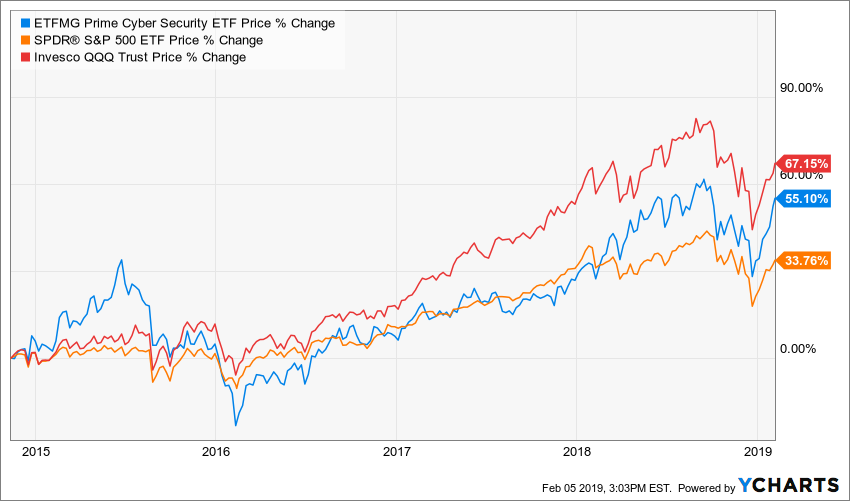 But there’s not necessarily a single trend that’s lifting them all — these are all individual companies with different drivers. Here’s a chart of the past few years for just a handful of them that I mentioned above, to give you some idea:

And that’s certainly not all of them — that’s not even half of the top ten holdings in the HACK ETF, some of which have not been around for long.

So which stock are the Stansberry folks touting here? Let’s check our other clues:

He does mention that ETF, too…

“If you’re looking to invest in this trend, you could go out and buy a sector-focused Exchange Traded Fund and potentially do well. One of the most popular funds is the Prime Cyber Security ETF (ticker: HACK).

“But if you want to capture the biggest possible gains… you’re going to have to do something different. I’ll show you my action plan in just a minute.”

Presumably “something different” means “picking individual stocks” … and he implies that he’s identified one stock. In fact, he notes that, “if my research is correct, this company will become the clear leader in the cyber defense ‘arms race.'”

“It’s partnered with some of the biggest Internet technology firms in the world: Microsoft, Google, and Amazon.

“And it’s quietly inked deals with some of the world’s top financial institutions like Edward Jones, the NASDAQ Stock Exchange, and some of the top banks in China, Korea, and Croatia.

“It’s even set up partnerships with some of the most popular wireless carriers like Sprint, CenturyLink, and a telecom company that covers nearly all of Australia.”

“It has more patents than any of its competitors — over 500 at last count with another 240+ pending.

“It’s even earned an official product endorsement from the U.S. Department of Defense.”

And that’s about all we get by way of clues… so what’s the stock?

Well, the Thinkolator had to do a little huffing and puffing on this one — but we’ve got a crazy, sunny 60-degree day here in Massachusetts despite the fact that the calendar says “February,” so it was a pleasure to haul her out of the garage and fire her up to get you your answers. Those clues got chewed up nice and smooth, giving us a clear answer out the other end… this must be Fortinet (FTNT)

Which is, sadly, not the same as Fortnite, the video game your children and grandchildren are probably obsessed with (though that global video game craze is subject to cybersecurity fears, too, as Check Point (CHKP) recently reported… Fortnite is part-owned by Chinese giant Tencent, in case you’re curious).

Fortinet is growing quite nicely, and has been among the stronger cybersecurity stocks in recent years thanks to a long series of “beat and raise” quarters and very strong revenue growth. What it isn’t is “cheap,” which you would probably guess given the “hot” sector — FTNT is trading at a forward PE of about 40 (on 2019 estimates) and will be reporting after the market close tomorrow, so it’s likely to be a very volatile stock over the next 48 hours (as it has been for much of the past year, recently surging to a new high on Oct 1 and then collapsing with the market through the end of December).

Fortinet is a small company in the context of Cisco (CSCO) and Amazon (AMZN) and Microsoft (MSFT), I suppose, but it’s certainly not tiny — the market cap is about $14 billion, and it has $1.7 billion in sales over the past year… so it does take some hefty investments by their customers to move the needle in a big way, though it sounds like those investments are being made.

The operating results indicate that they’ve been improving over the past couple years, too — profit margins have gotten up to almost 13% recently, after dropping to just about zero three or four years ago… so perhaps the competitive pricing pressure is not so intense, or they’ve managed to scale the business better in some way.

This is a pretty appealing company in the abstract, they have some longer-term contracts (deferred revenue is over $1.5 billion) and plenty of cash ($1.7 billion, with no debt), so there’s some steadiness there — and it looks like the business has not been seasonal but has pretty much improved every quarter over the past couple years (just going by the basic numbers in their last quarterly earnings presentation).

The only real challenge is valuation, it’s hard to justify paying 40X forward earnings for a company that is forecast to grow those earnings at only about a 15% average annual clip over the next couple years. It could be that they’ll grow faster, of course, or that Fortinet has a strong enough product offering to be worthy of such a premium, but it does make a purchase more challenging — particularly as I think about it using stale numbers, just a day before they’ll update us on 2018 and presumably offer some guidance for 2019.

The major competitors for Fortinet in enterprise firewall technology, as I understand it, are Cisco (CSCO), Palo Alto Networks (PANW) and Check Point Software (CHKP)… Cisco doesn’t really count, since so much of their revenue comes from other products, but of that bunch of big players Palo Alto trades at a similar valuation (just over 40X forward earnings, though estimates are for better than 20% annual earnings growth) and Check Point is the more conservative choice (forward PE of 19, expected earnings growth of about 10%). I don’t know enough about the products or the different services provided to judge the quality of these businesses, but based on the numbers and Palo Alto’s slightly better revenue growth in recent years, I’d give PANW a slight edge based on my quick skim of the numbers.

If you do like FTNT and decide you want to start nibbling here, the cautious route would be to start small and buy both before and after earnings — the company has beaten estimates handily for several quarters in a row, but just beating estimates isn’t enough at 40X earnings… for that kind of valuation, you have to either really blow out the estimates, or provide some future optimism if you want to please investors (or, preferably, both). On November 1 FTNT beat estimates handily and also caused analysts to increase their estimates for the full year, and the stock still fell by 13% on the day because they didn’t increase their guidance for the full year (it has since recovered that loss, the price is now, coincidentally enough, almost exactly the same as it was the day before they released earnings last quarter).

So that’s my take on Fortinet after a few moments of research — clearly cybersecurity is a growing area of interest for investors, so if you like or dislike Fortinet or have other companies to call to our attention that are doing something special, please share your wisdom with a note in the friendly little comment box below… thanks for reading!

Disclosure: I own shares of Amazon, Facebook and Google parent Alphabet among the stocks mentioned above. I am not directly invested in any cybersecurity stocks other than Okta, and will not trade in any stock covered for at least three days, per Stock Gumshoe’s rules.

Now I know why there a no storytellers like the brothers Grimm or HC Andersen today. They are all employed by the Stansberry folks.